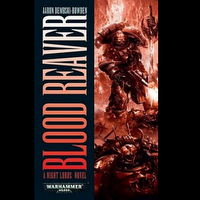 Have you ever read a story and thought, “Wow, I wish the bad guys would win?” Have you ever wondered what life would be like in an Astartes Traitor Legion? Do you like your gore, cannibalism and pain in bite-sized chunks? If you answered “yes” to any of these questions, then Blood Reaver is for you.

Blood Reaver continues the adventures of the Night Lords that began in Soul Hunter. In this episode, we get a Night Lords/Red Corsairs team-up, telling the story of one of the 40K universe’s more infamous events: the destruction of the Marines Errant chapter.

Interestingly, this novel reads more like a good old-fashioned heist story (actually, a heist-within-a-heist) than anything else. Like most good heist stories it has a cast of misfits, including: Talos, the story’s somewhat-titular protagonist and (anti-) hero; Uzas, the less-than-closeted Khorne-boy; Octavia, the hapless navigator; Septimus, tech-adept and emotionally distant rogue; and Lucoryphus, the barely-sane Raptor. Of course, there are other characters, but these are the stand-outs to me…oh, and Huron Blackheart. Ol’ Melta-Face appears in what amounts to a few well-executed cameos.

Aaron Dembski-Bowden is a very good writer, one of, if perhaps not the best doing Black Library novels. His writing is tight, his pacing is great, and his characterizations are spot-on. I actually found myself liking this nigh-unlikable cast that maintains some semblance of honor despite their utter corruption. That’s no mean trick for a writer to pull off, and Mr. Dembski-Bowden does it, and does it right. I’m particularly a fan of his dialog, which in the hands of a less-capable author could have been stiff and artificial — his flows naturally, sounding like normal conversation and popping when it needs to. He even went out on a limb and included a little shipboard romance in this novel, which in the 40K grim-dark could have felt very out of place. Fortunately it wasn’t overdone or pedantic, though it was foreshadowed a little too heavily. His presentation of the Night Lords as pan-chaotic sadists (as opposed to Slaaneshi masochists) is interesting, as is his reasoning behind why they are that way. In echoing some of the points of the Horus Heresy series, an Astartes doesn’t just wake up one morning and start worshiping the Chaos Pantheon on a whim – there are reasons, and while they may not be “good” ones, at least you somewhat understand what got them there.

Keep in mind, though, that the Night Lords aren’t nice people. They are a pack of sneaky, bloodthirsty, cannibalistic, back-stabbing traitors, and they know it. In fact, they revel in it — being almost as dangerous to each other as they are to their enemies. This provides more than a little tension between the cast.

There are a few issues, though. We’re not dealing with unknown lore here — if you know the history of the Marines Errant, well, you know how the heist is going to turn out. In other words, there’s not a great deal of dramatic tension. It’s definitely the journey and not the destination that matters in Blood Reaver’s case. There are also a few details that seemed very wrong to me. Boltguns don’t have stocks, for example, and since when did the VIII Legion have an abundance of Thunderhawks?

All things considered, those minor flaws don’t prevent Blood Reaver from being a good read that gives you a victim’s-eye view of life behind the curtain in a Traitor Legion. Yes, there are a few scenes of torture and some gratuitous gore. Considering the subject matter, that’s to be expected. It’s a fun read, though, and I recommend it.

Rating: 4 out of 5 Stars
What do you guys think of the Black Library presenting stories from the Chaotic point of view? Am I wrong, do Legionary bolters have stocks? Did Thunderhawks replace Stormbirds in the Traitor Legions and I not notice? What Black Library author is your favorite? 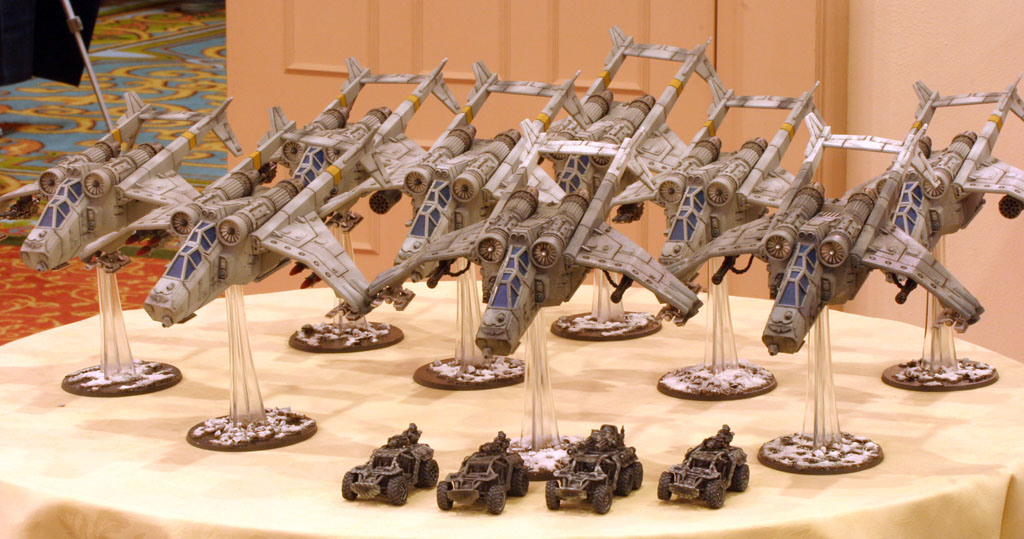