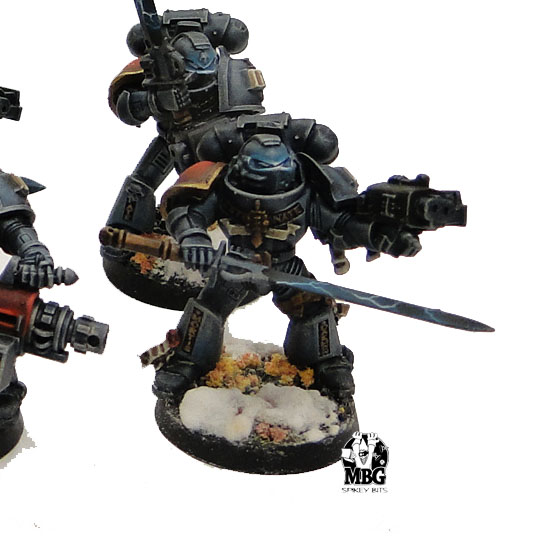 MBG here to share with you my biggest hobby phobia, Snow.  I have to admit, the one thing hobby related that has always given me fits was doing snow on bases. No clue why…. I can pin, sculpt, build from scratch etc, but I always run screaming when it comes to doing snow.

Why? I have no clue. I suppose it has to do with messing up and ruining a perfectly good model, or just being overwhelmed by the plethora of snow basing products out there.  I mean how do you pick one over the other, right?

Well recently the time came to man up. I had Kenny over at Next Level Painting, paint up some Grey Knights for me while I get the time to get mine all finished up (working a lot sucks). Problem is that I didn’t like his Colorado-esqe snow basing. So I wanted to try out a different looking snow style, more “drifty” looking rather that “pile-ish” if that makes sense. Check out the “before” base with chunky snow piles, and my “after” snow drifts on the right.
Of course I still had no idea where to start, until I saw a sweet painted Tau army up at the FLGS that had snow on the bases as well.  After talking with the guy about how he got the effect, and how easy it was to do, I decided to give it a try on my Grey Knights!

Apparently all you need to make authentic looking snow effect on bases turns out to be some white (yes white don’t use wood glue it’s yellow- we all know what yellow snow is) PVA glue, and a one dollar box of arm and hammer baking soda from the grocery store!  Yup that’s it. Amazing!!!!!
Here’s how to make it work. First apply some PVA glue to the base using a small dry brush or a large base-coat brush, whatever works for the size base you are working with.  Then sprinkle on some Baking Soda, or to go a little faster and dip the whole model into a container of the stuff. Then do your next model and so forth.
When you get to the last man in the squad go back and re-flock or sprinkle from the beginning, as the glue will probably have absorbed all the power and looks a bit paste like by now. Repeat that until you get the look you are going for. I think I flocked them twice maybe three times on some of my bigger models. Squad 1 after flocking, but before matte coating. Note residual particles on lip of the base- be sure to clean them off with water and a stiffer brush before you matte coat!

What do you think? Is simpler better if it gets the result you are looking for?

Author: Robert B
Robert is a veteran tabletop and miniatures gamer, and writer with over 20 years of experience. His specialtiesies are the worlds of Game's Workshop's Warhammer. He began writing for BoLS In 2010.
Advertisement
Game Tutorial Grey Knights Hobby Painting Space Marines Warhammer 40k
Advertisement

Brent Does... Painting? (An Inquisitor, Step by Step)