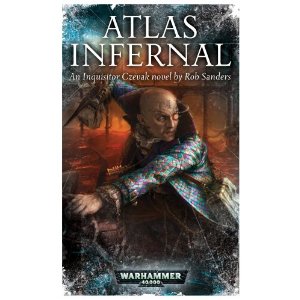 Inquisitor Czevak leads a ragtag, fugitive fleet across the galaxy for the future of all humankind in this new novel by Rob Sanders.

In the interest of full disclosure, I’ll admit I’m fascinated by the Holy Ordos. Having said that, when given the chance I jumped at the opportunity to give this new book a read. I wanted a novel that would provide an expansion on the world of the Inquisition, and Atlas Infernal did not disappoint.

When I read a Black Library book, I like to think in terms of how the world and characters expand on the game ideas and themes. For example, it’s one thing to play an inquisitor, it’s another to imagine what they represent in the “real world”. The true strength of Atlas Infernal is its depiction of an Inquisitor and his retinue. Allow me to explain: when you see an Inquisitor in an army list, he or she was more often than not accompanied by an Inquisitorial henchman warband. Sure, you can see why that would be in terms of the game — they amplify the combat prowess of the Inquisitor and/or multiply his usefulness by the effect he has on the game. But why would a member of the Holy Ordos have a gaggle of folks around them? After reading this book, you know — because henchmen are like the inquisitor’s Swiss army knife, each one of them is a resource, a tool for the Inquisitor to exploit to accomplish his goals. Czevak’s retinue of “tools” consists of a junior (in terms of rank) Inquisitor, a drug-addicted psychic and her servo-skull, a Relictors Techmarine, a Rogue Trader and her ship, some Guardsmen, and a Daemonhost. The way this ragtag group works together — sometimes willingly, sometimes deluded by Czevak — gives a great deal of insight into what makes these bands of henchmen work. To me, it was quite fascinating.

Ordo Xenos Inquisitor Czevak has some very lofty goals indeed, and some very powerful enemies. As perhaps the only human “invited” to visit the Eldar’s Black Library (and subsequently escape the Harlequins that guard it), he possesses some very unique knowledge — namely, how to actually get to the Black Library — and there are certain entities that would do pretty much anything to gain that knowledge, not the least of which is Ahriman of the Thousand Sons. Needless to say, having knowledge that Ahriman desperately wants to possess doesn’t exactly extend your life expectancy.

Fortunately, Czevak is extremely resourceful and just intelligent enough to be a worthy adversary to the Thousand Sons sorcerer, because the main thread of story involves Czevak’s desperate attempt to thwart one of Ahriman’s more involved, apocalyptic plots. I won’t reveal what the plot is nor its goals, but it is suitably epic in scope, nature and complexity — Tzeentch would be proud. The kicker is, Czevak is forced to work against this plot while being relentlessly pursued by his former Harlequin jailers, which as presented here are far more formidable than Eldar story-telling dancers. Also, did I mention that Czevak’s own Ordo Xenos isn’t exactly happy with his more “radical” approach to his duties? Nor the other Ordos and Grey Knights? He is definitely a wanted man — good thing he has his retinue to help him out.

And that’s the strength of this story, really. Yes, there is definitely some exposition on the inner goings-on of the Inquisition. The plot jumps back and forth in time and the once the full extent of Ahriman’s plot is revealed, take a moment to soak it up. But amongst all the fate-of-the-galaxy stuff going on, it is really the way Czevak and his merry band work together that saves both themselves, and countless others.

The only real issue I have with Atlas Infernal is what I will call the “final escape”, in the last chapter prior to the epilogue.. It felt…rushed. Tacked on. It smacked of deus ex machina to me and while, yes, considering the subject matter that may not be too far-fetched, but I wish some other way of resolving that plot-line had been devised.

But even that gripe doesn’t take away from the overall strength of the work. Atlas Infernal has been my favorite Black Library book in quite a while — yes, to me, it was that good. I recommend it.

What do you think of the Inquisition being fleshed out? Isn’t it interesting that Rob Sanders chose the Ordo Xenos, perhaps the order we know least about, to write a novel about? Wouldn’t it be great to have your own retinue of henchmen to carry out your orders?