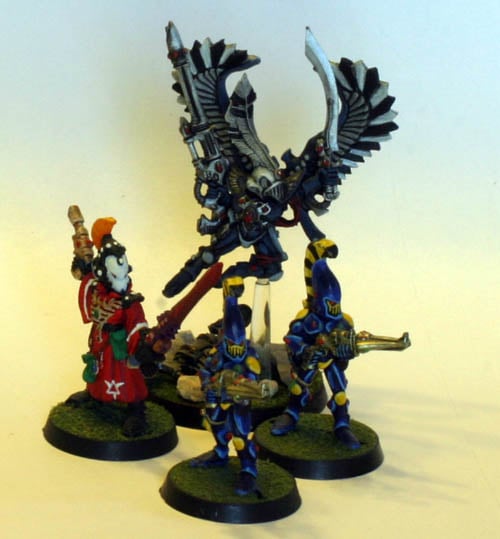 It’s been bone dry on Eldar rumors for years, till today…

Guardians being redone. Will include new weapons platform and storm guardian bits.

Avatar getting new fine cast version with weapon options (spear/sword) not as big as FW model, but larger than current.

Lots of new mech options. Jump pack/jet options for walkers similar to new FW models, but unclear if this is new model or upgrade to current model. Upgrade packs don’t seem likely, and current model is decent, so I have my doubts about this rumor completely.

Some sort of shimmershield device. Portable cover save for a unit, but static once deployed…model in design for it. Sounds fishy to me? But the de have the portal…who knows, I say unlikely.

From obvious dept comes the nightwing and some form of bomber. Neither look at all like de ships, or existing FW. Definitely eldar.

Drop pod of some sort that can carry 20 troops, 10 wraith guard, or 1 wraith lord. Deploys as firebase that has higher cover rating for guardians. Sounds like a bastion that drops into play with a weapons platform attached. Not sure I buy into this rumor completely, it seems too complex the way it’s been described. And I never saw any evidence of this in design before.

Cheers. Still super long off, though. Have your salt handy.

Here is the BoLS Lounge thread here.  What I found most interesting on these is the implicit confirmation of 6th Edition in roughly the first half of 2012 as we’ve been hearing for months from other sources.