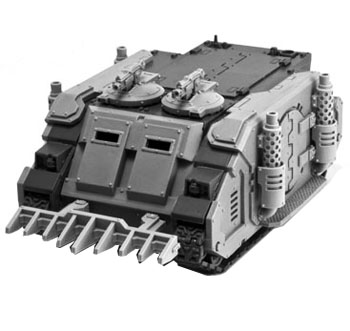 Looks like that Heresy-Era bug is still alive and kicking.  Now you can accessorize your army with Old-School Rhinos…

There are many known patterns and designs of this robust  vehicle, and the MkIc Deimos Pattern Rhino is among the oldest variants,  first issued en-masse to the Astartes Legions of the Great Crusade. This  pattern is armed with two turret-mounted bolters, slaved to the target-logis  systems of the Rhino’s machine spirit rather than the more common  pintle-mounted storm bolter seen on both the earlier MkIb Mars Pattern vehicle  and the later MkIIc design that became more common after the Horus Heresy.

This book retells the brutal conquests and bloody battles of the Chaos Warlord Tamurkhan and his horde in their quest to attain the favour of the Dark Gods. In this 208 page, full-colour, hardback book you will find: the saga of Tamurkhan the Maggot Lord, lavishly illustrated and darkly detailed; an extensive bestiary section and a campaign system allowing you to fight the battles of Tamurkhan’s horde in games of Warhammer. The book also contains The Legion of Azgorh, a fully playable Chaos Dwarf Army list, as well as rules for playing massive battles with forces drawn from all the different Chaos Army books.

And with this we finally see the first Warhammer Forge hardcover book see the light of day.  I have this funny feeling Forgeworld is going to ride the Contemptor into the ground with lots and lots of other kits and accessories for it. ~Chaos Contemptor – pretty please!

~Nice to see the “classic Rhino” return to us after 20 years.  Have at it.