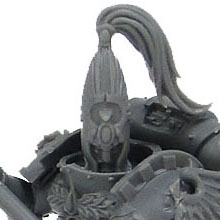 MBG here with a randomly inspired conversion. You see the other day I was cutting up some bits (because we were getting ready to expand our bits catalog), and a sweet conversion idea hit me outta nowhere.

I was working with the Dark Angel Veterans, and Blood Angels Sanguinary Guard kits, and had them arranged in piles in front of me.

As I sorted them, the Sanguinary Guard torsos happen to be in a pile on top of the Robed Dark Angels Tosos, and the light bulb went off in my head, Custodes!  Weird musing sure, but it just kinda just goes to show that you never know when you can be inspired to do some modeling.

Anyways I messed around a little with all the bits I could scrap up, and made what I think is a pretty sweet Adeptus Custodes conversion. I really like it, and it seems easy to make too- which is a bonus!

It’s kinda funny because it seems like you really can make almost anything out of bits these days. I mean with the variety of kits available now, compared to even a few years ago, it just seems like there is sooooo much potential out there for awesome conversions!

Plus with the glut of secondary market kits and bits, the possibilities seem almost endless now. So here he is.  Obviously this guy is still a little rough, but I think from the artwork above it’s pretty spot on “theme” wise.  I’m going to still be working on him more in the future, he’s still a long way from being “done”. Here is what I used for parts, and really it doesn’t seem like it ended up being too ridiculous either (another plus).

The links are above go directly to the bits store, just so I don’t have to post pics of every bit on here.  If you know what the bits are already, even better.  You’re ahead of the curve on this one (which is understandable as some of these kits have been out for awhile).

So here’s how I made the model.

First I added the Sanguinary Guard Torso to the Dark Angel Legs, in the relative pose I was looking for. I dry-fitted the Halberd arms first to see how it would all look- I didn’t want this venerable warrior to be all wonky. Next I cut the Halberd blade off, flush to its mount. Then I added the cut down Angelus bolter so it sat flush to the halberd shaft. After gluing the blade back on so it didn’t obscure the firing path of the bolter itself, I cut off the Stormbolter from the left halberd arm.  Then I attached the weapon and arms to the body.

Be warned this step sucks, a lot. I used plastic glue and got it to work with some elbow grease, but it was not fun. These arms are not meant for the body I was mounting them to.

After the halberd I just added the head (looking in the direction he would be swinging the blade), and attached the shoulders.  I cut down the extra bits you see on the pads and glued them on as well. Last was the backpack, and viola Conversion a’la Custode!

Check out the three-sixty below for all the details, and post your comments! What do you think? Does it capture the Custodes look well enough to make a whole army’s worth? Have you seen any other cool Custodes conversions lately? -MBG

Author: Robert B
Robert is a veteran tabletop and miniatures gamer, and writer with over 20 years of experience. His specialtiesies are the worlds of Game's Workshop's Warhammer. He began writing for BoLS In 2010.
Advertisement
Conversions Hobby
Advertisement 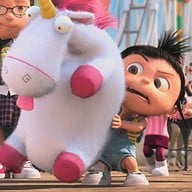