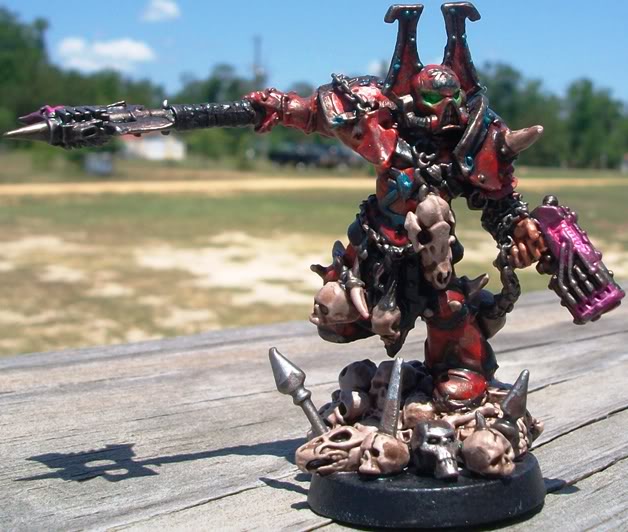 Kepora here with my take on what’s arguably one of the only good HQ choices in the current Chaos Marines codex, Kharn the Betrayer!

Welcome, one and all, to my painting and modelling article series “Fresh From the Fryer”! I’m Kepora (some of you may know me as Kepora from the comments section) of the newly-founded Southern Fried Gaming blog, and in these articles I will showcase conversions and paintjobs by your’s truly, as well as a few items by friends of mine or other such submissions that I feel are worthy (read: cool!). I will also endeavor to explain how I did the conversions, and-when possible-I will include step-by-step instructions. Feel free to use any conversion ideas listed in my articles, but I only ask for one thing in return: show me your work!

For my rendition of Kharn, I wanted something more archaic in appearance; his strength comes from himself and the blessings of Khorne, not some measly set of armor. Exposed flesh was a must, but not -stupid- amounts-people in my armies wear their damned helmets! A few of the GW Berzerker parts look good, but for someone like Kharn, Forgeworld parts were a must. Luckily, I had a spare World Eaters helmet and shoulderpad from my kitbash of the Forgeworld bits with the Possessed pack (which I will show off in due time!), so that worked out well; I also managed to score Lord Zhufor’s axe before someone else snagged it on ebay, though most of my bits came from the wonderful fellows at Bitz & Kits. (HIGHLY recommended site, even if you’re a US player like me!)

Of course, one needs an epic base model. I perused the Fantasy range on the website, and came across this rather swell-looking fellow. VERY nice model, even if it’s still metal; one I’d be proud to have leading my army (if I played Fantasy!). However, his legs were far to small/thin as they were, he lacks a plasma pistol, and-while admittedly nice-that axe just doesn’t look quite “mean” enough for Kharn. We’ll get to that, though. Nice cast! There was a bit of a bad mold line on the large shoulderpad, but the hobby knife was able to (mostly) deal with it. (I wish I had Liquid Greenstuff back when I did this; it would have made quick work of that mold line!) So, the first step is bulking up the legs some. I lacked greenstuff (and greenstuffing skills!) at the time, so I only focused on the shins and feet for now. I dug up a pair of regular Chaos marine legs for this, and on the metal model I was able to save the kneepads, simply turning my clippers so they were flush behind the kneepads adn then trimming down the excess with a knife. I then cut off the CSM legs at the knees and cut the knees to fit in a nice charging pose. This is optional, of course, and if you’re willing to do the greenstuffing you can cut off the kneepads and pin on the CSM shins/feet to make it feel less archaic/more in-line with the other sets of powered armor. I tried to save the flail but failed, so I simply cut it off and glued on a skull. After this photo was taken, the chain was bent so the back of the skull could be glued to the shin to keep it from breaking off easily. The top of the fist holding the chains had the exposed chainlinks cut/filed off to allow easier attachment of the plasma pistol. For the axe, I cut off the butt end and business end of the metal axe, leaving only the part with the wraps. I did the same with the haft of Zhufor’s to make the “neck” of the axe longer, have him holding the axe in a way that made more sense. I was unable to pin it at the time, but if you’re brave/skilled enough to do it, then be my guest! So far it’s held together surprisingly well for me, so so far, so good.

While the glue dried, I went back to the body. The torso looked a tad small.bare to me, and my best buddy’s Space Wolves give my Chaos Marines a hard time, so I thought a carefully placed wolf skull (the one with the chain hoop on the back of it) worked well. The Forgeworld head fit in fairly well, and the plasma pistol went on easily. Now we’re in the home stretch! To make the dynamic pose easier (and because it’s simply really really cool), I re-used the decorative skull pile that came with the set. I was able to super-glue his left/leading foot into one of the sockets, but it was a little fussy for me; when I go back to re-touch/re-paint him, I’m going to be doing some pinning work. The other socket was filled in with a plastic skull, and some more skulls and spikes were added to the bare spots on the base (I glued on the decorative skull pile off-center to better balance him and to make moving into base contact easier.). This would also be a good time to greenstuff the accordion armor on the back of his knees, if you wish to do so (I will be doing this as well when I re-touch him). The right forearm takes a little tirmming/fudging to fit on at the new angle, but it’s no hard task by any means. If you choose to do so, trim the model’s existing left shoulder down some and glue on a Chaos Marine pauldron. Advertisement
That’s it, he’s assembled! Do any other greenstuff work/trophy additions you wish to make, then paint him up! Here’s to the future of the Chaos Space marines! Don’t forget to tell me what you think-and to show me what you do with this!
Advertisement

If one of the more artistically-inclined members of the community would like to aide me with graphics for my blog and the articles, please contact me at [email protected], or one of the listed instant messengers! And don’t forget to come on down sometime, y’hear? 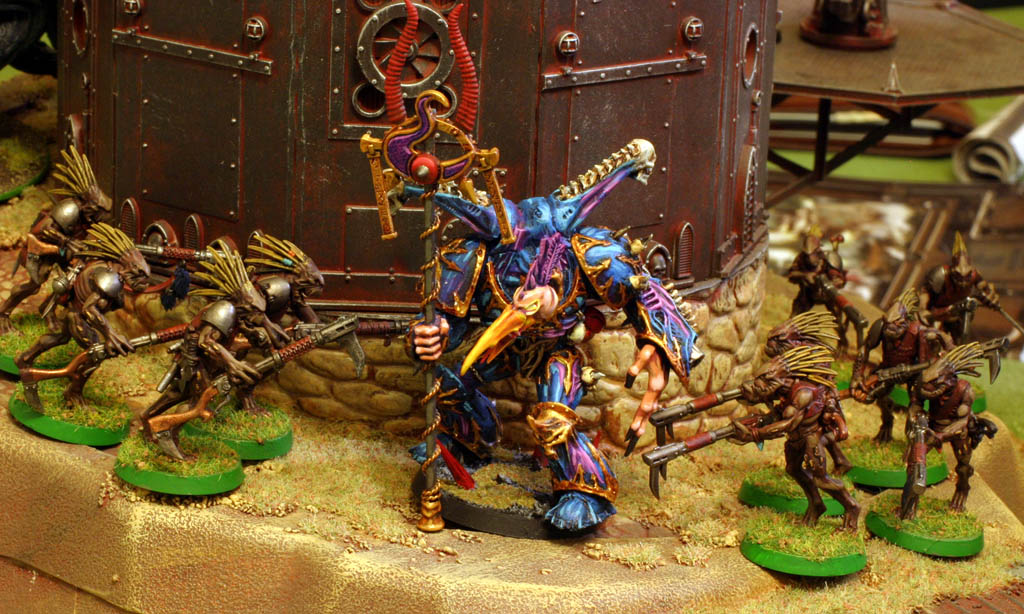