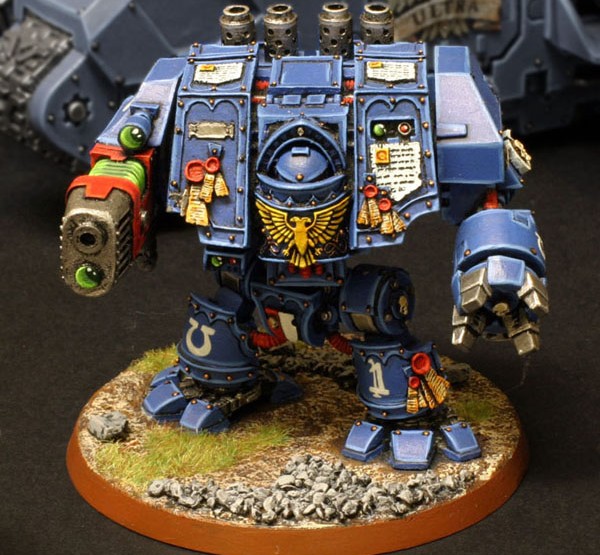 Sometimes you end up with an army you just have to show off.  Presenting the best of Ultramar, and a bit of lamentable history of the Ultramarines.

So this army has been in the closet a long time.  It was a purchase many years years from an gamer in Texas who has been lost in the mists of time.  It is probably my best painted army and has a strong streak of nostalgia for all you older players who remember the “classic Ultramarines” paint scheme.

This army is built around the lost 1st Captain Invictus (remember his rules anybody) who died defending the polar fortresses during the Tyranid invasion of Macragge. What always impressed me about this army is the absolute inability of it’s painter to cut any corners.  Every single detail is brought out, from detailing on Invictus himself, to the tiniest buckle on a Tactical Marine’s bolter strap. What is saddening to me about armies like this is that are more like pieces of art trapped in amber.  As you can see, this army doesn’t have a lot of the goodies that make up a modern Marine army, as they didn’t exist at the time, and wouldn’t perform well on the tabletop.  Some options are no longer valid, and I don’t have the ability to match such a high end paint style. So my beloved Classic Ultramarines sit, happy to show up as bit actors in pictures-of-the day, patiently awaiting the day when I come across a painter with a brush up to the task of expanding them, and a nice tight armylist with the smallest number of new additions to make them viable on the tabletop. In the meantime, enjoy the shots and lets hear it for for the glorious days of yore.  Anyone else have old-school classic paint schemes out there for your armies?