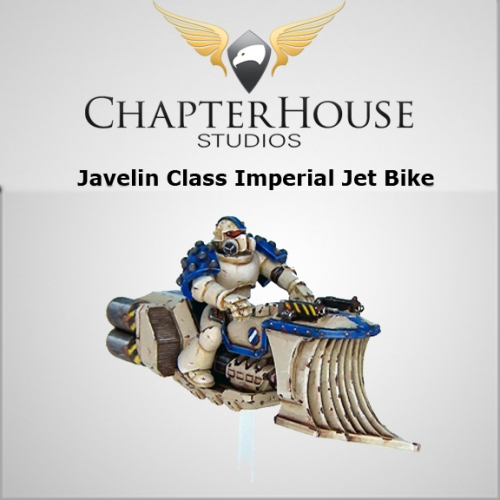 Goatboy here again with another model review. I got lucky enough to get two of Chapterhouse’s new Javelin Class Imperial Jetbike to build and paint up. I decided to make one a Pre Heresy style and the other a Chaos Bike kit bash. So with that in mind – let’s get this review on.

I have decided to tweak my review system a bit. I wanted to go into how the model fits as one of the major review factors in the model. This way I can go into the style of resin used, how much work you need to spend on it, as well as some of the major factors you think of when getting a new model kit. So the three factors are going to be Build, Paint, and Value. I also want to lessen the amount of numbers I seem to use. This way it is simpler to figure out if this model is worth your hard earned money.

Goatboy’s Review Scale
1 – Why am I reviewing this? Oh yeah I am probably not going to be putting this on the site.
2 – Barely acceptable. In fact it better be cheap so the sheer crap factor of it might be covered up in savings.
3 – Fine – not terrible not amazing.
4 – Good model and worth a look at.
5 – Wow – this kicks ass.

So let’s start with the Build. This model went together extremely well. The resin was an excellent quality. It was not too rigid nor was it extremely soft like some of the other supposedly fine materials out there. All the pieces fit perfectly with very little work needed. I had to take off some resin spout bits off the bottom of the model – which gets covered up by one of the bottom pieces so any terrible cuts or other bits are easily hidden. The pieces felt solid enough that dropping it was not a worry nor was it too heavy that the pieces might get damaged. The interesting thing in this kit is that you get options to create a different weapon other then the normal dual machine gun options. This adds a nice factor to the kit as well. You get two jet propulsion options in the kit and I went with both bigger jet options on the two models I put together. You also get a set of arms as well as a set of legs that fit within the “grim dark” universe. The model also comes with a clear flying base if you want to use it. Also this kit will have an Attack Bike upgrade coming too that will fit onto the model. Thus giving you options for a completely Jetbike army. The design of the kit falls within the pre heresy style. This is both good and bad as I kind of wished we had more – well stuff on the bike. Either beefier jets, wings, or some else to create a stronger profile. I also wish the guns were bigger too – but that is just my inner Ork talking. Beyond that the model was easy to paint. Each piece was very distinct so it was fun to pick out each part within the model. The front nose has a very gothic feel. I added a bunch of bits to my Chaos bike to break it out of the same class as the initial design. Still the model was fun to paint up and with some small tweaks it becomes a very cool kit on the table top. The kit is the same cost as a other readily available bike models. It isn’t cheaper but at least it is the same. So if you are designing out a biker army and want to go towards a pre heresy style this won’t cost you any more. You are not getting the chest pieces are back packs but those are pretty easy to find if you need them. I like the options to create your special weapon units as well as the attack bike upgrade that will be coming out later on. Maybe they can set up a buy 5 special to create special Battle force style box of flying doom. So all in all this is a neat model from Chapterhouse. The resin quality is very high, it goes together very easily and it was fun to paint. A few things could push this into the F’ing awesome range but as a Jetbike Option this is a good one. I hope to get ahold of some of Chapterhouse’s new options with different tank bits as well as other pieces.