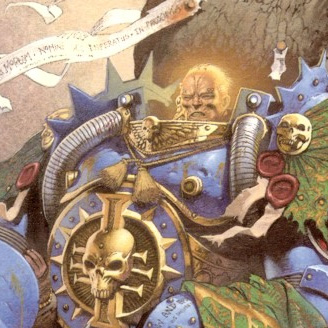 MBG here, with another one of my 40K Flashbacks. This is the segment where I dig deep for something cool that I have from back in the day.

Way back in the late nineties Games Workshop put out a monthly comic called Warhammer Monthly, which broke up a bunch of comic strips and presented them over several month arcs.  One of my favorite strips in that series was the tale of Epherial Stern called Daemonifuge.

An iconic character from those heady creative times was Ephrael Stern, Sister of Battle, the heroine of the ‘Daemonifuge’ strip – and later award-winning graphic novel – created by legendary comic book artist Kev Walker. In the 41st millennium Ephrael fought against the insane corrupted servants of the Dark Gods, effectively a living weapon against Chaos. Her nemesis-turned-ally was Silas Hand of His Imperial Majesty’s Inquisition. The strip ultimately ran to three books, although the last ended abruptly only part way through when the Black Library ceased production of the comic. – 40k wiki

Unfortunately the series ended, and the only way to get the rest of the story was in a huge $70 book from Black Library. At the time I couldn’t afford all that, but a buddy gave me half of the limited edition figure set based on the story, a figure of Inquisitor Silas Hand. The title picture was some concept art by Kev Walker I believe, easily one of my favorite pieces of 40k art ever. I’ve always been a little bit afraid of painting this figure. When I got it, I really thought I didn’t have the skills to paint it up right, and as the years past I just never got back to working on it.  Maybe, just maybe, we’ll see it on here in the future all done up.

I’ll leave you with this awesome full piece of art, and synopsis of Hand’s participation in the events from the Daemonifuge series. Have a great weekend gaming! The last mission of Inquisitor Hand was the investigation of Sister Ephrael Stern, who was reported as being tainted by Chaos within the Convent Sanctorum. Hand was seen with his retinue heading out for Ophelia VII where Sister Stern was residing. He found no signs of taint in Sister Stern and the investigation subsequently took him to Parnis, the planet Sister Stern came from before being suspected of being tainted by Chaos. Hand is suspected of uncovering the true allegiance of a highly-placed member of the Navis Nobilite during the voyage to Parnis aboard the Hammer of Thor, a vessel seconded to the Ecclesiarchy by the Imperial Navy. There is however no hard evidence of what occurred during this voyage. It is believed that a creature of Chaos possessed the vessel’s Navigator and brought about the destruction of the entire ship at the point it was detected. Inquisitor Hand and a number of Sororitas accompanying him are known to have escaped the destruction of the Hammer of Thor, touching down on the surface and continuing the investigation. Whatever occurred there is speculation but it is known that Inquisitor Hand and his retinue perished on the planet at the hand of some Warp entity, presumably the Keeper of Secrets. -40k wiki

Author: Robert B
Robert is a veteran tabletop and miniatures gamer, and writer with over 20 years of experience. His specialtiesies are the worlds of Game's Workshop's Warhammer. He began writing for BoLS In 2010.
Advertisement
Hobby Miniatures Retro Games Warhammer 40k
Advertisement