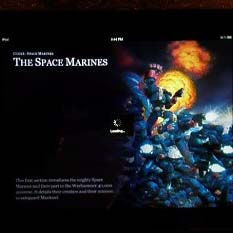 MBG here with my review of the new Digital Copy Space Marine Codex.

I went ahead and bit the bullet so to speak and downloaded the Space Marine Codex for iPad, and played around with it some. It’s very intuitive if you’re an apple user (I’m still learning), and pretty interactive.

Apparently there is additional fluff added in there somewhere as well, but I have yet to read the actual stories themselves. However I did notice on the back of the “book” that Matt Ward was credited with the book, which was weird to say the least.  I mean I like his work and all, but didn’t expect to see his name on the digital copy.

So after checking with the original paper copy it appears that Matthew Ward wrote it as well.  Weird that it’s not as broken as say Blood Angels or Grey Knights? I guess we can hope that maybe Sixth will be kinder to the Vanilla book.

It was posted up on Faeit 212 by GW that updates for their digital products will be free, which would certainly be nice for sure.

I had heard somewhere that there was a lawsuit raging over digital copies being as much as paper copies which cost more to produce etc.  I don’t have the specifics on that for sure, but I can certainly see the merit in such thought. The book is available for download on Apples iTunes, or from iBooks directly on the iPad for $41.25

I would suppose that the Space Marine codex will not get a revamp for quite sometime because of this launch, but I would be nice if it was updated to the new rules for free.  We’ll see…

I would also love to see Sixth Edition on the iPad as well! Not sure I would be happy with the price, but hey it’s cheaper than a text book I’d buy in college for only a semester!

This whole thing is kinda neat, and may just be the beginning of a new era in gaming…? 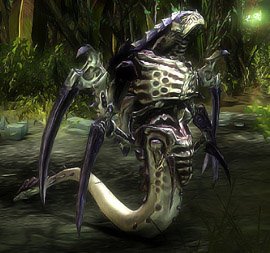