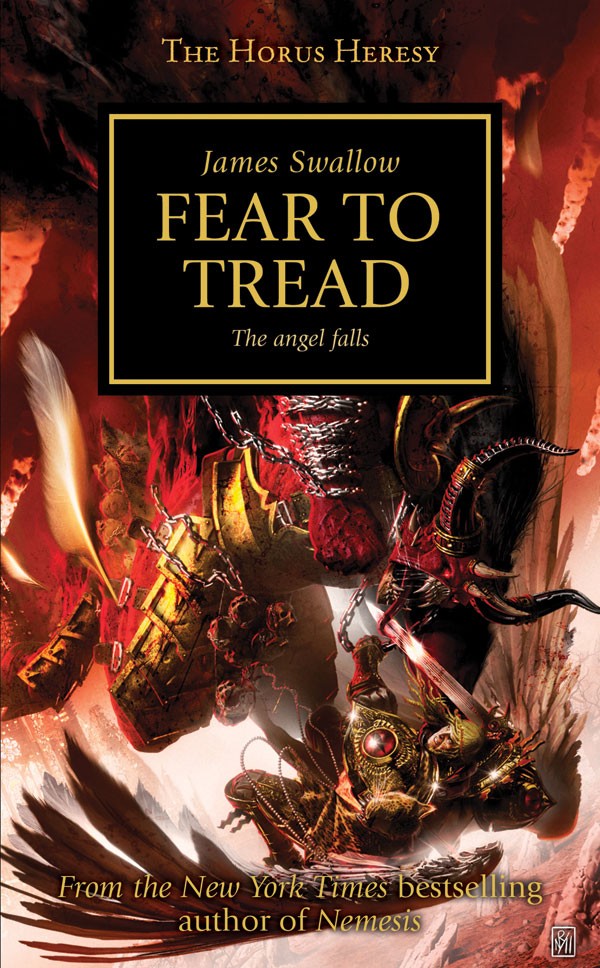 The Blood Angels walk into a daemonic trap set by the Warmaster.  Their darkest hour is upon them…

Fear to Tread is the latest Horus Heresy novel, and is penned by James Swallow of Nemesis and Flight of the Eisenstein.  Readers have been waiting for the Blood Angels to get their their Heresy novel and after 21 books, here it is.

Plotwise, the book goes according to the canon laid out in the  Horus Heresy: Collected Visions.  Broadly and with no spoilers, Sanguinious and his Legion finds themselves suddenly reassigned en masse to the distant Signus system by his most trusted brother – Horus on a mission that could be the salvation of the Legion.

Alone, and with pride and vengeance in their hearts the Blood Angels embark on what may be the most trying, dark campaign of their existence. They walk into a grand trap and betrayal on such a scale they will be hard pressed to merely survive, much less triumph.

So with that plot sketch out of the way, lets talk about the novel itself, its style, the details – all of that.  It really pains me to say it, but this one isn’t going to be one of the greats.  Swallow produces a novel that does the story good service, in a stately expected manner.  While the overall pacing and details are superior to his early Flight of the Eisenstein, it doesn’t match his superb Nemesis.

There are some great moments, about ten pages of wonderful reveals, and a whole lot of Sanguinius.  That’s the good.  The bad, is a plot that feels like you’ve been here a dozen times, and some appallingly bad major villians who share behavior and dialogue more at home with squabbling toddlers in a daycare, than undying dark masters of the Ruinous Powers.

While the novel never drops off the rails into the keystone cops idiocy of Battle for the Abyss, neither does it achieve the emotional and awe inspiring heights of  Nemesis, Know No Fear, or Prospero Burns.

I think at long last the Horus Heresy series is showing its age and not all of its authors know how to avoid the pitfalls.  Heresy era concepts like the Loyalists and even the primarchs knowing little to nothing of the warp means authors can have them blunder into traps and ambushes dealing with the warp. Any 40k reader fully knows the danger and is dragged along for the full suspenseful ride all the way down the rabbit hole.  The problem occurs when authors use this plot device for the seventh or tenth time on a Horus Heresy novel – it ceases to be a mechanism for suspense and becomes a tired trope.

Quite simply, after 22 novels, Horus Heresy authors are going to have to give the readers more than the standard 100 pages of dialogue, 100 pages of battles, 200 pages of general plot movement, and 5 pages of reveals.   Know No Fear gave me not only a deep emotional attachment to the Ultramarines, but a new found respect for the Word Bearers, because they were such POTENT VILLIANS. A force for ultimate evil, cold, methodical and with the powers and resources of the Astartes.  Nemesis made me connect emotionally with a EVERSOR ASSASSIN – that is some impressive writing. Simply put, its the Horus Heresy – we all know how it ends.  The authors have to instead make us care about the characters.