40K: The Ever Ubiquitous Landraider 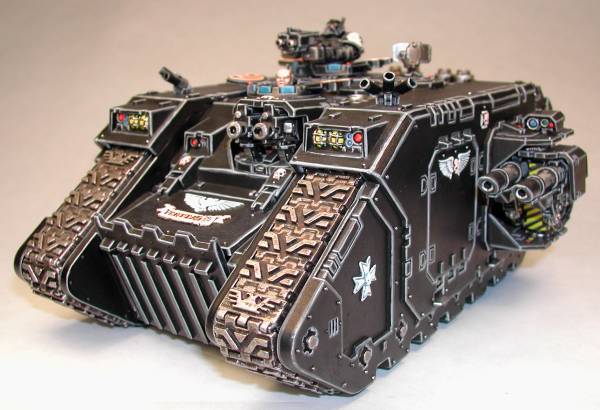 I remember once a good friend of mine told me back in 5th edition that every Space Marine army can benefit from the inclusion of a landraider. There is a lot of truth to that in my opinion. Like many I have played a lot of SM and CSM armies and I have always been a big fan of landraiders. Probably the major deterrent to fielding one is the cost in points. I had some success in 5th edition with the application of the landraider and I think it’s an even better investment now in 6th edition. The landraider is primarily a mobile bunker that allows you to assault your opponent with a hard dedicated melee unit. It is a big investment in points but it can also be a game winner too.

Meta Shift
So far I have seen a shift away from MSU (many small units) to infantry based armies and a landraider can fit well here. It is one of the two primary assault vehicles available to SM and CSM – Rarely do I ever see the Landspeeder Storm. The other primary assault vehicle is the Stormraven which is only available to Blood Angels and Grey Knights. This of course can be circumvented via the use of allies for other primary detachments but so far I have not seen anyone fielding them as such.

So based upon the above observations versus MEQ the landraider is even more survivable now as compared to the previous edition. There are certain niche xenos armies such as dark eldar and Necrons that have plenty of tools to quickly dispose of a landraider so versus armies such as these the key to success when fielding a landraider is to protect it, which can be easily accomplished by screening the tank with other friendly units – that is not hard to do if you put some thought into your initial deployment.

Aegis Defense Line
The Aegis defense line (ADL) is much more popular than the landraider. I have rarely used the ADL. The problem for me in terms of taking an ADL is that I like to field highly mobile armies in general. The ADL is better suited for armies featuring large units of infantry that hug it to soak up incoming enemy fire power. That can be quite powerful but it also tends to lend itself primarily to static armies that stand back and shoot most of the game. I would rather play mobile armies that can quickly grab control of the midfield and attack the enemy flanks… This type of strategy puts the pressure on your opponent early and often you can quickly take control of the majority of the objective markers which is what you want to achieve as soon as possible. CSM versus SM Options
There will always be those games when your opponent has nothing in their arsenal that can even touch AV14… In these situations the landraider is truly an adamantium clad rolling beast that can have its way with the enemy, rolling right up into the heart of their battle line disgorging a dedicated melee unit that will pummel them into so much dirt. These are the games when the landraider truly shines and of course it’s a game winner in these situations.

CSM only have access to the stock landraider and they receive a reduction in points since their version does not come with Power of the Machine Spirit. It’s still an awesome tank and has access to dozer blades and daemonic possession if you’re willing to pay the additional points. I think that dozer blades is a must have for a landraider… it is definitely a major oversight on the part of Mat Ward that Imperial landraiders don’t have this option as well. Dozer blades alone is a huge advantage for CSM as one of the worst scenarios is when a landraider immobilizes itself and suddenly you can charge the opponent with your bad ass dedicated melee unit.

SM have access to the standard Godhammer landraider as well the Crusader and Prometheus. My choice of the three is typically the Crusader as I’m currently playing Grey Knights – psybolt ammo is very cheap and benefits both the assault cannon and Hurricane bolter sponsons. Remember that Power of the Machine Spirit allows you to fire one additional weapon at its normal ballistic skill which is the equivalent of Skyfire – I like to use the S7 assault cannon since it has the highest rate of fire. The Prometheus might make a come back now with the re-emergence of the horde but to be honest this is the one version I don’t own nor have ever used. Protecting your Investments
Versus armies such as dark eldar and Necrons prudence is the better part of valor. Hang back and shoot from a safe distance then engage later in the game after selectively destroying those enemy units first that are a threat. The last thing you want to do is rush right in only to have swarm of Canoptek Scarabs eat your tank for lunch. If your opponent can’t reach your landraider without over extending their army it will serve as a deterrent and is something for them to worry about wondering when you will finally make your big move.

So that is it for now. I hope you enjoyed this article. Do you use landraiders and if so what are your tactics in 6th?

P.S.  So BeakyCon2 is finally behind us now and I can take a rest for a few months. I do want to say that next year we are planning to expand the event and we want to fully embrace 6th edition. This means you will see double FOC and approved Forgeworld units. We would like to go to a three day event so you can play more rounds, have more time each round and field bigger armies. This is an ambitious goal and will require a lot more work. We are very excited !!