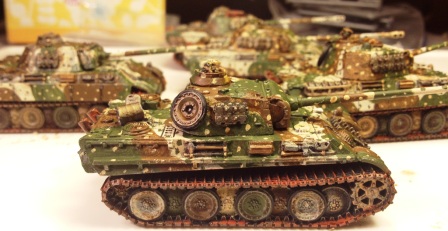 I was looking forward to cracking the German Panther G box set open, like a kid in a candy store. Don’t be decieved, even though the boxset appears metal this baby is half plastic and light as a feather. Now, lets see what it takes to assemble and paint.

To start, I love the detail on the plastic parts. They are better defined then the metal version, with absolutely no mold lines or metal blurring. Breaking things off the plastic sprue isn’t too hard, but does require a bit of time to clean up the pieces and patience so as not to force anything, I recommend using clippers and not just to try prying them off. Prying them off will break the barrel (yup, broke 3 of the 5), but they are rather easy to repair, again the benefit of plastic.

Unfortunately I did have an issue almost immediately though, as the tracks just don’t fit. I have always had to play around with the tracks when they were metal, but this is a bit over the top. They stick out far too much on the side of the model, when glued on they look ridiculous and the side skirts just don’t fit, they either wont fit or will flare out if you use a putty. You can see where blue stuff was needed just to hold it on, but this is not going to be acceptable. The panels still flared out . Oddly enough, on the box and website the models look perfect, and no mention of how to “repair” the defect. This leads me to believe they used metal parts, not the plastic ones to show an example of how great your tanks will look. IT seems like its just too much work to assemble a model, but lets see what it really took to correct.

My fix was a bit simplistic, but strenuous, yet it seemed to work. This is a good time to plug in your Dremel and get your sanding tip ready. I used a knife to shave down the inside of the track and cut off about 1/8th of an inch of plastic, then sanded the track and smoothed it out. I then took the dremel and blasted the side of the tank where the track will attach, shaving 1/16 off the base (again this is where the track attaches to the tank). Next, place the tracks in the correct position and examine the tank, ensuring the tracks are even with the side of the tank, so when skirts are placed they will be perpendicular to the ground. Alright, it really wasn’t that hard to fix.
Assembly and Fit: 2 Stars

Assembly for the rest of the tank comes off nicely and the parts are straight forward. Lots of options on the sprue, you only need to use about half of it for the panther, the rest can be used as bits for other vehicles and tanks, great for vehicle repairs. This part of the process gets back to 4 out of 5 stars, pretty cool model and appreciated options (usually only available in a seperate stowage blister)! Be VERY careful though with your machine gun part, it breaks easily and cannot be found when it does. A simple fix for this is using some florist wire, very fine gauge and gluing it in place of the MG barrel.

Overall Rating: 3 Stars
In the end, the model would easily pull a 4 star rating if they corrected the track snafu. I think its worth much more then its weight (which is considerbly less then the metal tracked version), and well worth the money!

On a side note, I was told that this track issue has been “fixed” in a new spin of the tracks, hopefully this is the case. After painting these tanks, they look amazing and the lessened weight is a bonus for my ridiculously heavy Pack 720! So what do you all think of Flames of War plastic tanks so far?