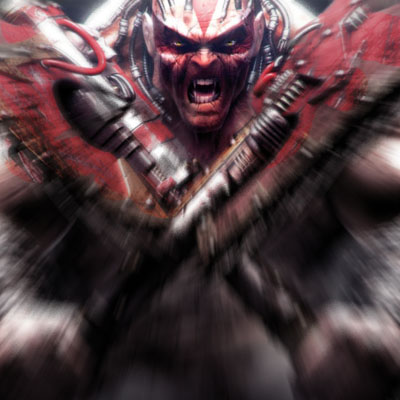 One of the earliest details of the 40k universe are the Primarchs themselves – Let‘s take a look at those 18 odd names.

This year was the 25th Anniversary of Warhammer 40,000. Over these 25 years we’ve seen old races develop and new ones emerge, the history of worlds fleshed out and watched great generals rise and fall but I want to go right back to the beginning, to actually just over 25 years ago to take a look at the origins of the Space Marine Primarchs and Chapters, not in the Emperor’s cloning tanks but a look at where their actual names come from. Often appearing before any other details about the chapter these names have truly shaped them.

We’ll start with an easy one as it’s a pretty well known one this; Lionel Johnson is an English poet who lived in the later part of the 19th Century. His poem “The Dark Angel” provides the Chapter’s name. Lionel died by falling off his bar stool.

The word Fulgur is Latin for lightning and becomes the Spanish Fulgor, meaning dazzling, brightness or lustre. He is also known as the Phoenician, possibly as the Emperor’s Children rose back up to full strength after falling down to just 200 members like a Pheonix rising from the ashes but more likely it comes from Fulgrim’s choice of armour, and that of the Emperor’s Children, purple. The ancient Pheonicians were known for being the only producers of purple dye, a dye so exclusive that it was only worn by royalty.

Aleister Crowley was a 19th Century Occultist. His motto is “Frater, Perdurabo” and means “Brother, I will endure”, not dissimilar from the motto “Iron within, Iron without”. This could have been combined with “Perturb” meaning to make someone anxious or upset.

Jaghatai, or rather Chagatai, is the Mongol Leader Genghis Khan’s second son. He was considered hot-headed and temperamental by his relatives. Bear in mind his relatives are all Mongols, a race not known for being calm and even-tempered. The tactics of the White Scars, favouring hit and run attacks and lightning raids are clearly influenced by the tactics of the nomadic Mongols.

Rus is an old Norse word meaning “Those who row” – a great way of describing Vikings in their longships. Frustratingly this is as close to an explanation as I can get, doubly so considering the rest of the Space Wolf meanings are not exactly subtle – the Fortress Monastery “The Fang”, the Canis Helix, Fenris, etc. His two wolves, Freki and Geri, are the same names as the god Odin’s wolves.

Rogal seems likely to be a variant on Royal or Regal. The surname for Dorn is Old English for Stronghold, and also Gaelic for Fist. This gives us both the explanation for the name Imperial Fists and also their love of fortifications. And as for their chapter symbol, let’s take a look at the logo for the Tom Robinson Band of 2, 4, 6, 8 Motorway fame. Konrad Curze gets his name from Kurtz, a character in Joseph Conrad’s novel Heart of Darkness. This was subsequently made into the film “Apocalypse Now” in which Marlon Brando’s character Colonel Kurtz, after a campaign of terror in Vietnam, is to be assassinated by Martin Sheen (the Callidus Assassin sent to kill Konrad is M’Shen). Both Kurtz and Curze welcome their killer.

Sanguinis is Latin for blood which if fairly straightforward. Sanguine means to be cheerful or optimistic, an ironic choice of name given that the Blood Angels are cursed to eventually succumb to the Black Rage.

This is simply made up from “Angry” which pretty much covers Angron and all the World Eaters. I have also heard that in the 80s there was a member of GW called Ron who was very angry but just wanting something to be true doesn’t mean it is.

Robert Charles Guillemin is a Boston based street artist. He was famous for using acrylic paints. This seems extremely obscure but given that Rogue Trader came out in the mid-eighties, the same time Robert was painting and Ultramarines are named after the colour.

I am particularly proud of this explanation and gleefully explained it to Rick Priestley. And it turns out I’m very wrong. Instead he made up a name that sounded like a West Indian revolutionary in some French colony – very different from the Guilliman we know and love!

Mortarion simply comes from the Latin “mors” meaning death. With his gaunt appearance and scythe he looks just like the Grim Reaper. Oh, and the Grim Reaper’s also known as the Angel of Death, as are the Space Marines.

Magnus is a name meaning “Great” but i think this name goes deeper than that. Albert Magnus was a bishop in the 13th Century who was a great advocate of the peaceful co-existence of science and religion, a battle that Magnus must fight at the Council of Nikea. The Council of Nicea in 323 AD was the first council of Christian Bishops bought together by the Emperor Constantine. The suffix “The Red” gives him the feel of a Norse monster, incredibly apt with the Thousand Sons hatred of Space Wolves.

Horus is one of the Egyptian gods, the son of Osiris and Isis. His left eye was gouged out creating the Eye of Horus symbol. In Egyptian mythology Horus is a good guy though, battling his uncle Set to protect Egypt.

Lupercal is the cave where the she-wolf suckled Romulus and Remus, the legendary founders of Rome. Also William Shakespeare’s Julius Caesar begins with the Roman Festival Lupercalia, possibly foreshadowing Horus’ role as Brutus to the Emperor’s Caesar? Logar is one of the provinces of Afghanistan. The name is a combination of Loy (Great) and Ghar (Mountain). This explanation does have a resonance of biblical stories which would be in keeping with the Word Bearers mission. His First Chaplain Erebus is named after a Greek deity who was one of five creatures to come into existence from Chaos – his name literally means a “place of darkness between earth and Hades”.

Vulcan is the Roman god of fire and smithing. In legend Salamanders have always been associated with fire, possibly as they like to shelter in wood and so when their hiding place was burnt they would leap out of the flames!

Corvus Corax is the Latin species name for the common Raven.

Alpha is the first letter in the Greek alphabet and Omega is the end. Hence the beginning and the end. Peculiarly the Alpha Legion is the last of the First Founding Legions. Aside from Roboute Guilliman these are all my own opinions supplemented with some pretty hefty google-fu and I’m fairly sure I’ve got carried away on some of these. But what do you think? Is Warhammer 40,000 good substitute for a classical education?