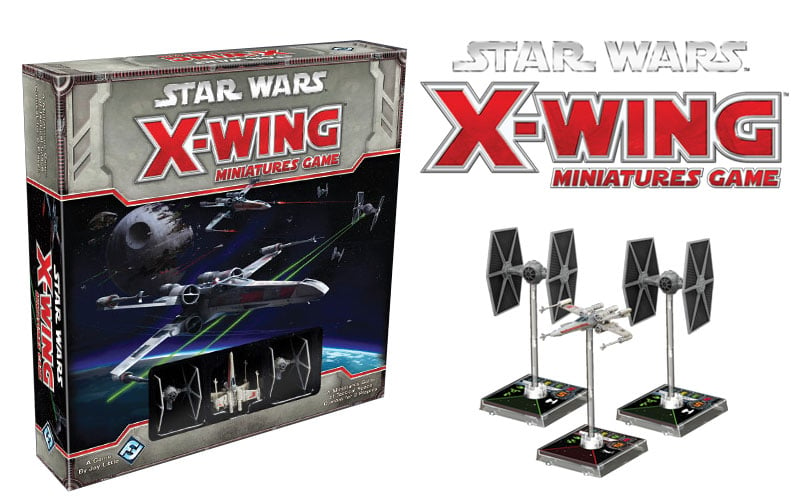 Fantasy Flight Games has had about eight months to flesh out their X-Wing Miniatures Game.  Let’s play a game.

The X-Wing Miniatures Game was released at Gencon last year and has since built up a strong stable of available ship options with more on the horizon.  The game is set during the Galactic Civil War and consequently uses recognizable ship designs from the original movie trilogy.  The current list of available ships is:

Galactic Empire
It’s also worth noting that Fantasy Flight will be releasing four new ships this coming third quarter: the B-Wing, Tie Bomber, Lambda Shuttle, and HWK-290.  You can find preview information on them here.
When building a list, you don’t just pick individual ships, but you pick a pilot for that ship, from generic Academy Pilots for TIE Fighters or Green Squadron Pilots for A-Wings to well-known characters like Darth Vader for the TIE Advanced x1 or Biggs Darklighter for the X-Wing.  While all X-Wings will look the same, the pilot card on the stand will change to reflect the pilot’s skill, upgrades they can take, and unique abilities (if it has one).  Named pilots all come with unique pilot talents, like Wedge Antilles’s ability to reduce a ship’s agility value when attacking it or Boba Fett’s ability to change the direction of banking manuevers after its been locked in.  In addition to individual ship-types having access to equipment like astromechs or missiles, certain pilots can take elite pilot talents that can grant them any number of advantages, from Veteran Instincts, which increases a ship’s pilot skill value, to Expert Handling, which allows a ship to perform a barrel roll action to shake a target lock.
Each ship type has a selection of available actions that it can perform, like Evade, which allows you to cancel a single hit that targeted the ship that turn, Focus, a flexible action that can be used to convert “eye” results to hits or evades when attacking or defending, Target Lock, which can be used to re-roll attack rolls or fire missile/torpedo weapons at a locked ship, Barrel Roll, which grants a small amount of lateral movement, and Boost, which grants a small amount of forward or banked movement.
Pilots and upgrades all have corresponding point values, which are the metric you use to build your squadrons with 100 points being the tournament standard.
Mechanics of Activation
Activating models is a bit of a departure for those accustomed to other games.  Players choose how each of their ships will move using ship-specific movement dials.  A maneuver is chosen, and the dial is placed face down.   After all maneuvers have been plotted, dials are flipped and ships move in order of their pilot skill, with ships with the lowest pilot skill flipping and moving first until all have done so.  Then the combat phase begins, where ships make attacks in reverse order, with the highest pilot skill ships shooting first, descending sequentially.   This would mean that a ship with a low pilot skill like an Academy Pilot TIE/F would move and take their action first but attack last while PS9 Darth Vader in his TIE Advanced x1 will move and take his actions last but attack first.
Attacks are made using attack and defense dice.  Whenever making an attack, a ship rolls a number of attack dice equal to the ship’s weapon stat with four potential results: blank, focus (eye), hits, and critical hits.  Focus actions allow you to convert the focus results into hits, and critical hits against an unshielded ship have an extra effect.  The defending ship rolls defense dice equal to their agility stat with three potential results: blank, focus (eye), and evade.  Like with attacking, the focus action can be used to allow you to convert the focus symbol to evade results.  After the attacker rolls, the defender rolls an amount of defense dice equal to their agility stat, negating hits and critical hits (in that order) for each evade result rolled.  Any attacks that aren’t negated are successful and the defending ship takes damage.
If you’re interested more in learning about the game play, I highly suggest checking out the short videos on Fantasy Flight’s website that demonstrate the game play.  They do a fantastic job of showing the basics, far better than I can describe it.
Should I look into it?
Since no game is for every gamer, I thought I’d quickly hit on the pros and cons of X-Wing.
Pros
Cons
A few weeks ago, I managed to capture my first, proper 100-point game on camera, which has been edited into a battle report.  While we did make some rules mistakes, including using incorrect initiative rules, wrongly identifying the phase names, and some other minor things, we still felt that the game was interesting enough to share.  Check it out!
Personally, I’m really enjoying X-Wing so far, and can’t wait to get more games in.  I highly suggest checking it out.  You can find some great articles by Super Kaiju here on some of the already-released models, all of which are good reads. 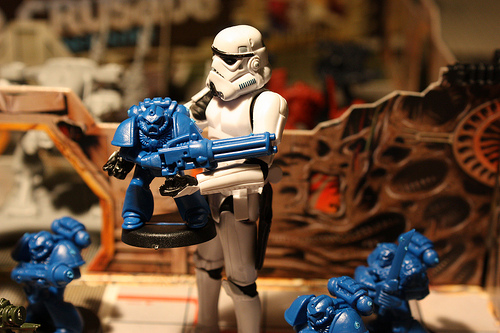