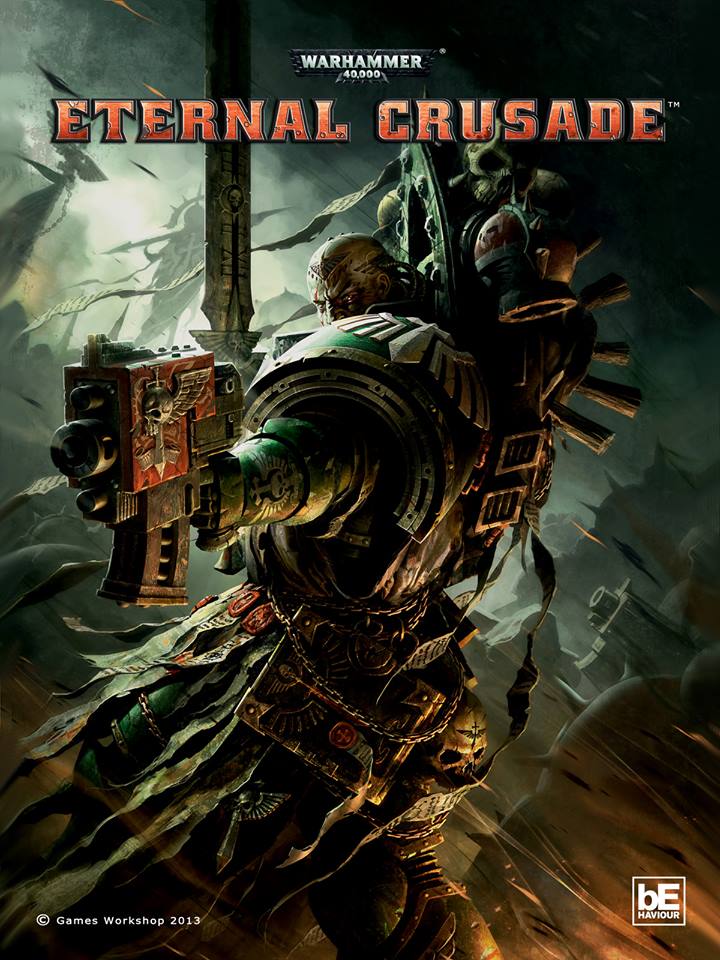 It looks like a new Warhammer 40,000 MMORPG is coming.  Take a look at: Eternal Crusade

Then the press release:

Behaviour Interactive and Games Workshop® proudly announce a new online game in the Warhammer® 40,000® universe: Warhammer 40,000: Eternal Crusade. Behaviour Interactive has obtained the rights to create a wholly new MMORPG persistent war experience for PC, PS4 and Xbox One set in Games Workshop’s universe of the 41st Millennium. In the game, players choose a Warhammer 40,000 race and fight directly as one of their warriors in massive conflicts for territory. It will be up to each faction’s community to determine their own destiny as they vie for control of an entire planet.

“I am thrilled to announce what will finally be the first MMORPG based on the Warhammer 40,000 license,” said Miguel Caron, Head of Studio, Online at Behaviour Interactive. “Eternal Crusade’s team are all MMO development veterans and with the support of Behaviour’s 20+ years of experience this is going to be the online Warhammer 40,000 universe game that fans have been dreaming of for years!”

“Warhammer 40,000: Eternal Crusade is the second milestone in Behaviours new online strategic positioning after last year’s Star Citizen Announcement.” said Rémi Racine, President and Executive Producer of Behaviour. “We are very happy with the progress of the online studio and you should expect more similar announcements to come.”

“The depth, breadth and sheer level of detail that the Warhammer 40,000 universe has after 26 years of continuous development makes it one of the great fantasy settings of our times.” said Jon Gillard, Head of Licensing at Games Workshop. “Experiencing the thrill of first hand combat in this world of eternal conflict, with thousands of other players beside you, will be fantastic.”

Warhammer 40,000: Eternal Crusade is currently in development for PC, PS4, and Xbox One and will release in late 2015.

Main features of the game include:

Experience the gameworld with 3rd-person, behind the shoulder action featuring precision gunplay and brutal melee combat with excruciating finishers;

Participate in a persistent online war to conquer the planet, its fate completely in the hands of the players;

Participate in truly massive conflicts that simultaneously bring thousands of players to bear over territories and other strategic resources.

Get behind the controls of Space Marine Rhinos, Predators, Ork Battlewagons and other iconic vehicles of the 41st millennium;

Hack through genuinely challenging procedural content alongside your battle-brothers and never have the same experience twice;

Earn the right to customize your builds in a deep progression system drawing on the rich Warhammer 40,000 universe.

Found a Battle Squad with friends and prepare for conflict from your customized shared space in orbit – then drop down to the planet together and seek out glory.

So basically we’re looking at:

You can see the main developer website and their product portfolio here.   I’m glad to see someone else pick up the 40K MMO ball after the THQ-Vigil debacle.  That said, one of the longstanding criticisms of Vigil was their lack of a MMO pedigree. Here’s Behaviors bio:

Based in Montreal, Quebec, Behaviour Interactive (www.bhvr.com) is an independent world leader in the video game industry, employing 275 talented people in Montreal, Quebec, and Santiago, Chile. Since 1992, the company has developed over 140 fun games for everyone on all major platforms. Today, the studio specializes in creating engaging and reward entertainment built with market and platform in mind, through mobile, online and console games. Behaviour works with the industry’s best media companies, including 505 Games, Activision Blizzard, Bethesda, Disney, EA, Eidos, Games Workshop, Konami, Majesco, Microsoft, Nickelodeon, Paramount, Sony, Ubisoft and Warner

~Have at it folks. (also I appreciate the link to Reddit-cats)