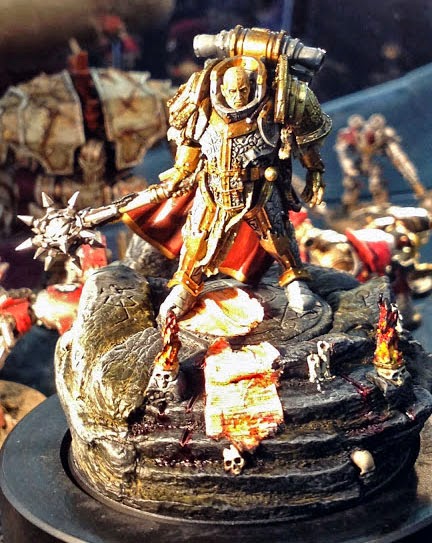 Here are rules for 4 legends, Ferrus Manus, Curze, Vulkan, Lorgar!!! Behold the fury of the primarchs! Forgebreaker: range – melee , str x2 , ap 1 , melee , Concussive , Strikedown
(if using him in the campaign , he no longer has Forgebreaker , since Fulgrim stole it , if so his points cost is reduced to [REDACTED] )

Sire of the Iron Hands – Ferrus Manus has Relentless and Smash special rules ( the latter may be used in conjunction with any of his close combat weapons or attacks) and shooting attacks against him suffer a -1 penalty to their strength.

All models with the special rule legiones astartes ( Iron Hands ) in an army containing Ferrus Manus gain the Feel no Pain ( 6+ ) special rule (unless they already possess a superior version of this rule ).

Master of Mechanisms: possesses Battlesmith special rule and passes repair rolls on a 3+ in addition , any vehicle with at least one armour facing of 13 in a primary detachment containing Ferrus Manus gain the ‘ It Will Not Die ‘ special rule

The Nightmare Mantle: provides 2+ armour save and 4+ invulnerable save , grants Hit and Run , and Hammer of Wrath special rules (inflicting d3 HoW hits instead of the usual one)

Special Rules:
Primarch – ( Independant character , Master of the Legion , Eternal Warrior , Fear , Adamantium Will , Fleet , Fearless , It Will Not Die ))

The King of Terrors – Fear tests taken against him are subject to a – 3 penalty. In addition , should he be part of an assault where any enemy unit is destroyed outright, all enemy units subject to fear within 12 ” and with line of sight to the combat must take an immediate morale check or fall back

Wargear:
The Draken Scale – 2+ armour save , 3+ invulnerable save , halves the strength of any flamer , fusion , volkite, melta, or plasma weaponry used against him.

(Earthshatter – instead of attacking normally , place a blast template ( 3″ ) anywhere in base to base contact with him that does not cover any friendly models , all models under the template suffer a single automatic S8 AP3 hit with the Strikedown special rule )

(Line of Effect – draw a line from the primarch 1 mm wide and 18″ long to determine the weapon’s area of effect , all units crossed by the line suffer a number of hits equal to the number of models in the unit the line crosses , this line may not pass through friendly models)

Sire of the Salamanders – in an army which contains Vulkan , any models with the legiones astartes ( Salamanders ) special rule gain 1+ leadership and the Adamantium Will special rule.

Blood of Fire – may re-roll any failed It Will Not Die or Deny the Witch tests.

Wargear:
The Armour of the Word – 2+ armour save , 4+ invulnerable save (3+ against Witchfire and Force weapons)

Living Icon – all models in the same detatchment with the legiones astartes (Word Bearers) special rule who can draw line of sight to Lorgar , gain +1 to their charge distance rolls , and are immune to Fear , and gain a +1 bonus to their total score of determining the result of an assault.

Sire of the Word Bearers – Lorgar has the Crusader special rule and confers this to any unit he joins , while he is on the table ( not in a transport ) all models with the legiones astartes (Word Bearers) special rule may use his leadership for all morale and pinning tests.

Dark Fortune – may re-roll any failed Deny the Witch rolls , once per game , Lorgar’s player may elect to force a single enemy unit or model to re-roll all rolls of 5 and 6 to hit and to wound in a single player turn. The use of this power must be declared before the attacking player rolls any dice for the nominated model that turn.

Erratic Psychic Power -level 2 psyker who may choose to roll powers from either Telepathy or Telekinesis disciplines , however when using said powers , must roll 3 d6 and take the two highest dice results

( Lorgar Transfigured . Player may elect to use Lorgar after the begin of his fall to Chaos , if so , this rule replaces Erratic Psychic Power.
level 3 pskyer who may select ( not roll , SELECT) three powers in any combination from the Telepathy and Telekinesis disciplines at the start of the game. In addition when using said powers Lorgar rolls 3d6 and chooses the two lowest dice. Lorgar transfigured is treated as an upgrade that costs [ REDACTED]

I’ve GOT to get a copy of Horus Heresy: Massacre!  So, if you had to pick just one…