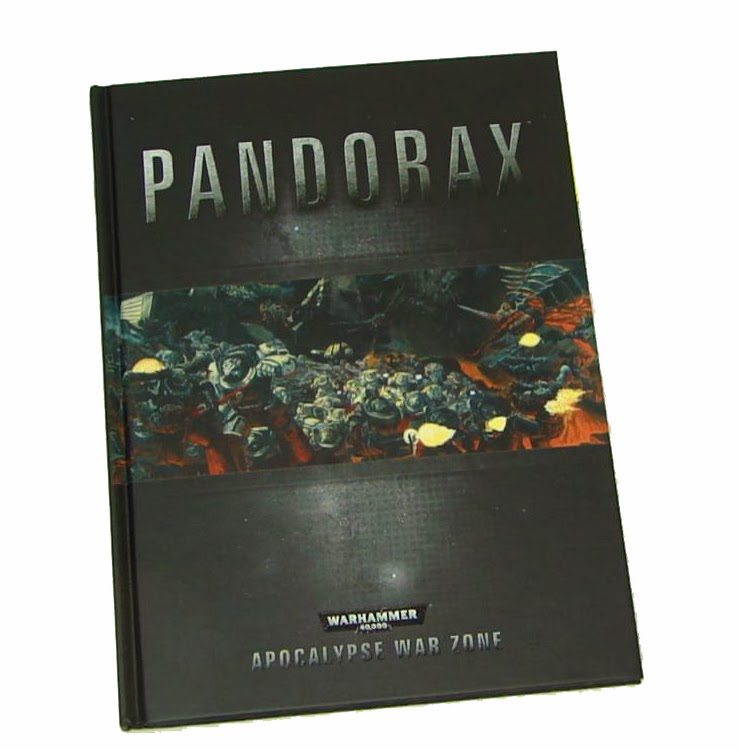 The newest supplement for Apocalypse Wazone Pandorax has just released, and if you’re a fan of the super heavy this book is for you.

Besides being a good book in general, Games Workshop published rules for several “custom” super heavies and Forge World models that have not had an Apocalypse update yet.

Chief among them being the Greater Brass Scorpion, Tower of Skulls, and Plague Reaper respectively.

Warzone Pandorax follows the story of a full scale Chaos incursion into the Pandorax subsector by Abaddon himself to recover some sort of relic of millennia past for a nefarious use by the Warmaster at a later date.
The Dark Angels also make appearance an entire chapter, as well as the de facto Imperial Guard and Navy elements that are seemingly always present at any give time in any system. You may recognize this piece amazing artwork from this book (above), but had no idea where it came from originally. The book itself is roughly 68 pages long, and contains about twenty pages of “new” data sheets as well as about eight pages of new scenarios, assets and finest hours for the factions involved.

I say new in quotation marks because this book was actually included in with the Apocalypse Collectors edition back in July. Advertisement
Rescue the Revenge is the featured battle report which features a rather overly ambitious tabletop playing space consisting of the interior of a starship and various asteroid / void elements around it. They pulled it off great, and it’s featured as the book’s centerfold as well. Rules of Engagement features all the new assets, scenarios, and other special rules that are unique to this book, and is followed by the Datasheets section when I have summarize below for those interested in what maybe now available for their faction(s).
FORMATIONS
Chaos
Chaos Space Marines
The Chosen of Abaddon
Daemon Engine Pack
Great Brass Scorpion of Khorne
The Hounds of Huron
Khorne Tower of Skulls
Maelstrom of Gore
Plaguereaper of Nurgle
Trinity of Blood
Daemons
Daemonic Forgehost
Imperial Guard
Deathstrike Vortex missile Battery
‘Emperor’s Mercy’ Commissariat Squad
Storm Trooper Mission Elite
Traitor’s Bane
Xerxes Airborne Support Wing
Imperium
Maruader Bomber
Warhound hunting Pack
Dark Angels
Talon of Vengeance
Thunderhead Squadron
Grey Knights
Assassinorum Murder Squad
STRATEGIC ASSETS
Chaos Space Marines
Death to the false emperor
Kreator Rex (all chaos super heavies start with an extra hull point)
Raiders from the Maelstrom
Chaos Daemons
Chaos Gate
The Damnation Cache
Imperial Guard
Colonel Strike
Jungle Ambush
Dark Angels
Intractable
Grey Knights
Defy the Daemon
Overall if you’re into Apocalypse I would definitely recommend picking up this book, as it has a pretty wide selection of formations and special rules for most popular factions.
-MBG
Subscribe to our newsletter!
Get Tabletop, RPG & Pop Culture news delivered directly to your inbox.
By subscribing you agree to our Terms of Use and Privacy Policy.

40K SHOWCASE: Bringing a Little Character to your (Badab) Characters