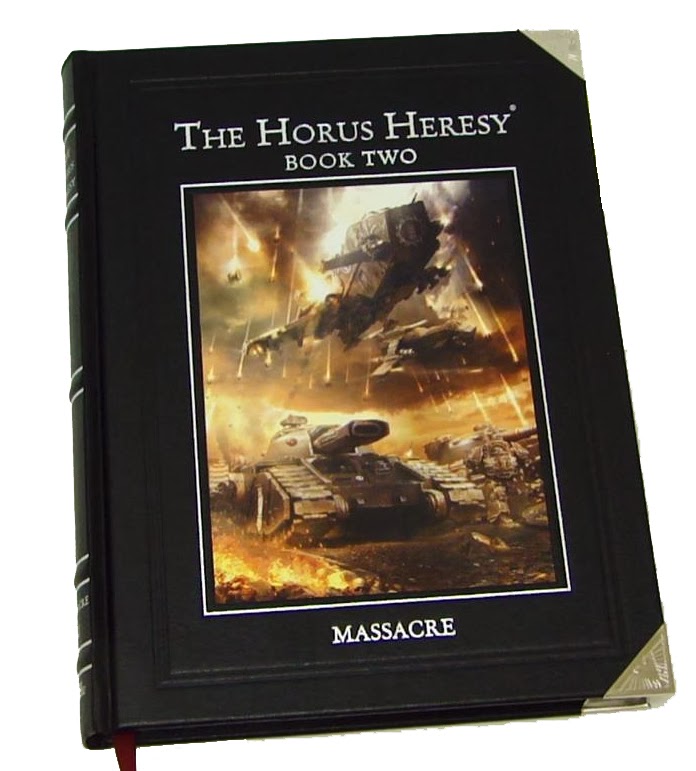 The newest Horus Heresy supplement for games of 40k er make that games of 30k released recently, and wow what a wild ride this book is!

Mostly everyone knows about the Imperium shattering events of the Dropsite Massacre on Istvaan V, but what most of us don’t know is just who some of the new first founding chapter’s are or where they come from really.

A lot of the fluff surrounding the Salamanders, Word Bearers, Night Lords and Iron Hands are at best only ten years old, and only really hinted at in the Horus Heresy novel series as of late.

The Massacre book takes several helpings of fluff for all of those legions and crams it down our throats, while giving us even more pre-heresy background on said legions as well. Of course this book touched on the big four chapters from volume one as well, and gave us new rules for many persons of importance from those legions too (like Maloghurst the twisted for instance).

However the Salamanders, Word Bearers, Night Lords and Iron Hands are the superstars of book two for sure. Written by Alan Bligh, the book itself is roughly 286 pages long, and recounts many of the events from Istavaan V which occurred over the course of only four hours.  It is book two of a three book Istavaan trilogy. It also provides over thirty pages of new and existing background on the Salamanders, Word Bearers, Alpha Legion and Iron Hands legions and provides the rules for their primarchs as well. Plus there is a campaign section for replaying the fateful battle on the Urgall Depression as well.

They also updated and added about ten pages of rules from book one, and prefaced the Legion army list section with those new changes. Also present was what many are saying is the framework for allowing Super Heavies to be played in “normal” games of 40k as well.  It may behoove us all to pay close attention to the pages picture above. Oh yeah and did I mention Primachs? Ferrus Manus, Konrad Curze, Lorgar Aurelian, and Vulkan himself all have Lords of Battle rules in this book!

Subscribe to our newsletter!
Get Tabletop, RPG & Pop Culture news delivered directly to your inbox.
By subscribing you agree to our Terms of Use and Privacy Policy.
Overall if you’re into the Horus Hersey in general (and not even about sexy rules for actually playing it) I would definitely recommend picking up this book, as it has a pretty wide ratio of fluff to rules.
That’s if for this one guys.  -MBG

Author: Robert B
Robert is a veteran tabletop and miniatures gamer, and writer with over 20 years of experience. His specialtiesies are the worlds of Game's Workshop's Warhammer. He began writing for BoLS In 2010.
Advertisement
Horus Heresy Videos Warhammer 40k
Advertisement