An Open Letter on The Chaos Space Marine Codex 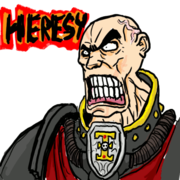 Jstove’s back with a letter to the Warpsmiths of Demon World #37 in reference to the current Chaos Space Marine Codex.

FROM THE DESK OF LORD GYGORAX THE VILE

Dear Warpsmiths of demon hell world #37, the one next to that Slaanesh warp rift that looks like a pile of that sticky glitter strippers always wear, I am writing you today to let you know that you are in violation, and you’ve been in violation for… Oh, the last 8 thousand years or so.

Me and the boys all got together, That is, me and the surviving veterans of the Sons of Horus 5th great company, (its called the Black Legion now if you’re keeping track, the morons in charge of this legion are always having us change up the color scheme) and we got to talking about everything that is wrong with Codex: Cultists and Heldrakes.

Well, after we discussed the failures of the underwhelming and humble Chaos Marine, and the Chosen that somehow over the last ten thousand years of permanent demonic time-warping warfare forgot how to infiltrate, and how the plague marines got better while everyone else continued to stay mediocre, we got to discussing some problems that were more than a codex old, and well, we pretty much figured out who was really to blame.

You see, it isn’t actually the boys in black. I mean, you can’t really blame them for their mediocrity, what do you want with a space marine that doesn’t have ATSKNF? Its kind of a foregone conclusion. Everyone on this team who isn’t fearless is a coward, that’s old news. What we figured out was that you guys, the wackjobs made of metal and pipe cleaners who are responsible for nailing all our toys back together when we break them, have really been phoning it in over the last couple millennia, and some of us up in the Legion Brass are starting to notice that you’re just a bunch of lousy post-mechanicum gold bricks.

The stupid loyalists just got another new codex, like they get 3 or 4 times an edition, and oh wow- Look at that, another new tank! And they have power loaders too now, like from Aliens? What the hell!?

I mean, come on guys. Seriously. What’s the most you’ve done for us lately, the Obliterator virus? That wasn’t even you! Some Iron Warrior got sneezed on by some warp demon and grew an assault cannon, and now that’s my entire heavy support section? When are you guys actually gonna start trying? I think the problem we’re all frustrated by, Jerksmiths of hell planet #37, is that you guys don’t have an excuse. Every passing century, the loyalist Mechanicum gets crazier and dumber, and yet for some reason, they still develop new toys. How do you explain that some corpse-worshiping, barely 100 year old snot-nosed techpriest can give the boy scouts a new predator variant every century, and you can barely squeeze out some kind of 80s reject demonic Battle Cat?

I mean come on, those morons actually pray to machines. They pray. To machines. The whole damn forgeworld runs on Windows 30k, they haven’t updated the drivers since Ferrus Manus was alive, and they still have a better track record than you guys? That’s just unconscionable.

I thought you jerks didn’t have the Mechanicum on your back anymore? Weren’t you free to do stuff like logic and science, and shove demons into murder machines to make half-demon, half-cyborg monsters, like in Doom? Why don’t we have a giant evil brain with a minigun driving a robot spider yet? That would be too cool! Can we at least get Hitler’s DNA in a cyborg demon shark or something? Anything? We’re supposed to be the bad guys of this universe, and we can’t even get a Hitler brain cyborg?

We’re seriously trying to figure it out over here… What exactly do you guys do all day?

You know what the worst part is? We know you betrayed us. We know you’re holding out on all the cool stuff, and frankly, I’m gonna tell Abaddon on you. I mean, look at the cover of the codex… You see that right there? In the background of this crapy old codex, on the right? That’s a chaos dreadnought with 2 guns! He has 2 guns! Oh wait, sorry… We call them helbrutes now. Right. When did you idiots forget how to make riflemen dreads? Can we please have those back? Maybe if we had those, we’d actually use the stupid helbrutes. Maybe if we actually had something to shoot with, firefrenzy would be cool! Those dumb jerk grey knights can have riflemen dreads, and they can even shove them full of spooky bullets or something. How do a bunch of good guys from Titan get spooky bullets, and we don’t? Can’t you at least invent a demonic proton laser from Ghostbusters or something?

Oh and by the way, what the hell is that giant awesome thing behind those dudes? Because I want one. It doesn’t look like any pattern of titan I’ve ever seen, and I was here 10 thousand years ago when you morons actually knew what you were doing.

But wait, there’s more- Lets go back even further! Yea, that’s right, its the 3.5 codex. Our best codex. I had to bring that back up. What’s all that cool stuff sieging the walls in the background? They don’t look like knight titans. And check out the spider cannon and the little baby defilers in front of it? Its like a big momma defiler. Can I get one of those?

Oh, what, they’re apocalypse units? That’s fine. I don’t care. The point is, you jerks need to get off your collective shiny metal asses and do something cool. It’s been like a thousand years since you invented the Defiler, and that was pretty great- I mean it was a metal spider with crab claws and a battle cannon, I can work with that. But this new stuff? Cut-rate Helbrutes and Dinobots? That’s what we’re going with now?

Can we at least get a new Predator or a Land Raider variant? Just rip the lascannons off and put on reaper autocannons. I know you guys love reaper autocannons. Come on, give us something over here. Or how about we tear the roof off the Rhino and make it open-topped so the berzerkers can hop out? That might calm Kharn down if he can just feel the breeze in the sun roof.

But enough of this crap- I feel like I’m screaming at a wall, and not the Insanity Wall in the mens room at the Demonette strip club that screams back at you and spits out condoms, just a normal, boring, sane wall.

The point is, you guys need to figure something out that the losers in this codex can actually use, because we’ve been sitting here for the last 3 editions waiting for you to do something cool and suitably evil.