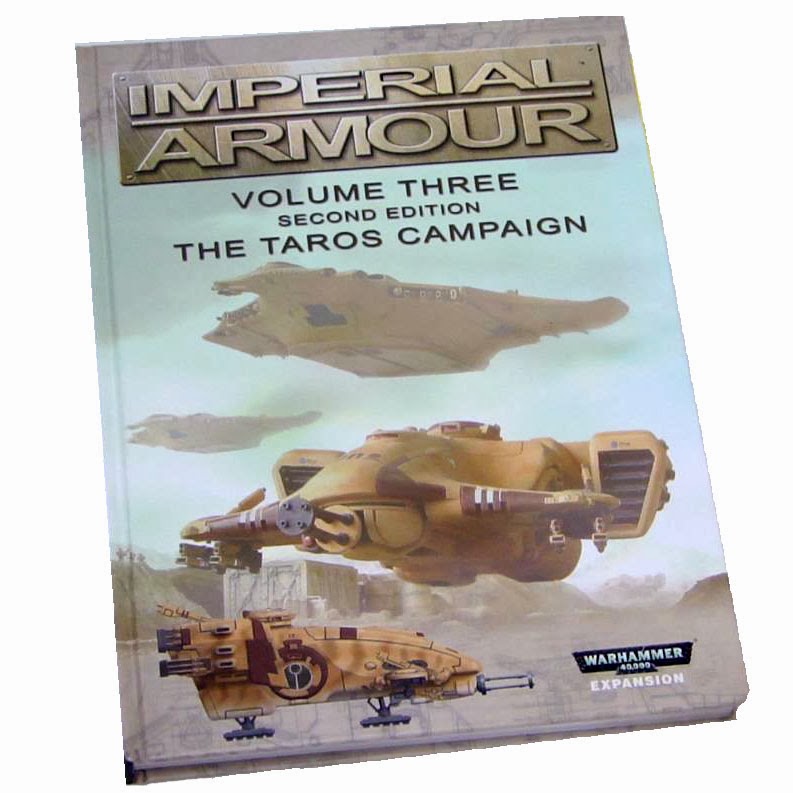 About a month or so ago Forge World re-released this book (like Imperial Armor Second Edition), right on the heals of the new Tau launch, as an update of the book of the same name from the 2000’s.

Following the release of this and IA Second Edition previously,  I’d imagine they have plans to re-release Volume Four that had to do with the Tyranids early in 2014 to coincide with a new launch of plastic ‘nids perhaps? Speculation aside, just as you’d expect from Forge World , it’s a great looking book with all the bells and whistles you would expect from a FW publication, great pictures, stunning graphics, and brief back story on each unit involved in the Taros campaign. The book itself is broken down into sections by factions, army lists, and a fluff section as well on the history of the campaign as well. The Force of the Tau section, as well as the Elysian Drop Troops section contain “40k Approved” rules for a lot of existing models from Forge World, and in some cases update them up to 6th Edition standards in terms of codex specifics, addition of hull point values or even just new USRs in general.

Units included in this book Subscribe to our newsletter!
Get Tabletop, RPG & Pop Culture news delivered directly to your inbox.
By subscribing you agree to our Terms of Use and Privacy Policy.
I wanna go fast, I wanna go fast!!

Overall like Imperial Armor Second Edition, it’s a great book that impact both normal games of 40k and Super Sized (Apocalypse) ones!

I would 100% recommend this book for anyone looking for some new “Tau Tech” as Tetras right off the bat can a pretty cool addition to any Tau list.  Most of the units in here are stamped “40k Approved” for your normal games as well.

There are of course Apocalypse units,  as well as interesting fortifications included in this edition as well. They also clarify if a unit entry overwrites a previous ruleset as well, so it helps keep the confusion down a bit (as you can see in the Barracuda entry above). When the industrial world of Taros falls secretly under the sway of the expanding Tau Empire, its mineral resources are diverted to the factories of the Tau and away from the ever-hungry Forge Worlds of the Imperium.

The Imperial response is brutal and direct with the full force of the Emperor’s military might being unleashed against the upstart xenos. The bitter war that followed involved two Adeptus Astartes Chapters, as well as thousands of Imperial Guardsmen from the famed regiments of Elysia and Tallarn. This record chronicles the war, from its inception to its dire conclusion.

Imperial Armour Volume Three – Second Edition: The Taros Campaign is the definitive reference for using Forge World’s extensive range of Tau Empire armoured vehicles and battlesuits in games of 6th Edition Warhammer 40,000. This book includes profiles for each and every Tau Empire unit in the Forge World range, from the humble Heavy Gun Drone to the super-heavy Manta, including those units deployed after the bloody conflict on Taros such as the potent XV9 Hazard Close Support Team and our Kroot Auxiliary units.

This 276-page hardback book is packed with artwork and colour profiles for the forces of the Tau Empire, the Tallarn and Elysian Imperial Guard regiments, and the Avenging Sons and Raptors Space Marine Chapters. It also contains unique scenarios to allow the bitter engagements of the Taros Campaign to be refought on the tabletop..  Courtesy FW’s site 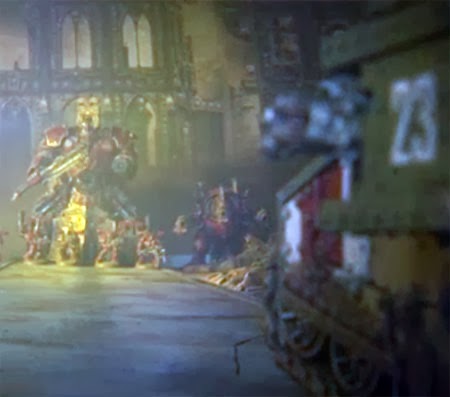