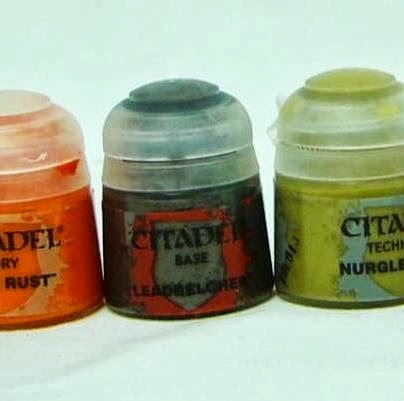 Games Workshop just released six new Citadel paints rounding our their line to 150 paints total.  Are they all they are cracked up to be?

That is a lot of paint indeed.

What’s nice about these new paints is that they help to produce a variety of effects on figures after most of the work is done, so I guess they really are more of a special effects or finishing paint than a true paint product themselves. Blood for the Blood God is a deep red paint that comes premixed to have both a sheen and a viscosity to it so that it can be both painted and “flicked” onto models to simulate blood splatter.  It can also be painted conventionally in streaks and shapes to accentuate vicious fighting as well.

As you can see from the model I painted above, the blood is very realistic looking (though dark) and both applies and dries well to conventional models.  I also tried the flick method too, which works like a charm when used with a toothbrush style applicator. Agrellan Earth is a very interesting “crackle” paint that can be used to create custom surfaces on your model’s bases.  It’s advisable to make sure you apply this paint over another coat or “base” of paint, as it seems to require some sort of foundation to adhere to as it begins to split apart. It does not work well on just bare plastic.

The more textured a surface is to start, the more crackled base you’ll get.  The base above was painted over an already completed textured base, and produced a very cool effect when dry. Nurgle’s Rot is fun because it’s basically Nickelodeon slime in a bottle.

Okay so maybe it’s not that bright, but it does have a sheen and brightness about it that can help accent any juicy decayed model you may want to paint.

The key to remember here is to treat this paint like a wash, even though it’s thick like a regular paint, as it can build up too much on surfaces and just look like a pile of poo (literally).  And while poo is funny, ruining your models is not.

The last three paints kinda work well together so I’ll cover them all at once.

Typhus corrosion is a neat little wash, that actually contains a bit of grit in the wash itself which simulates oil and grime quite nicely.  It also makes a great base wash over pure metal if you’re looking to add the Ryza Rust effect to muck and grime directly.  Otherwise you can add it to areas of pure metal paints per the norm. I like using them together because if you dab the rust on using a dry enough sponge, it will stick to the raised areas of texture from the wash and look three dimensional!

Then after all that is done you can add in a wash of the new Nihilakh Oxide to product a weathered metal look to the overall piece. Games Workshop expects you to add another drybrush of metal on top of all of these effects according to their tutorials, but I think it’s maybe a little too much or just a way for them to try to sell more paint perhaps.

Below is a shot with all of these effects put to use on one model, er ladder… Personally I don’t like the look of #1 at all because the orange color of the rust will fade slightly over time regardless (see left).

That’s it for this one guys.

Author: Robert B
Robert is a veteran tabletop and miniatures gamer, and writer with over 20 years of experience. His specialtiesies are the worlds of Game's Workshop's Warhammer. He began writing for BoLS In 2010.
Advertisement
Painting Review Videos
Advertisement 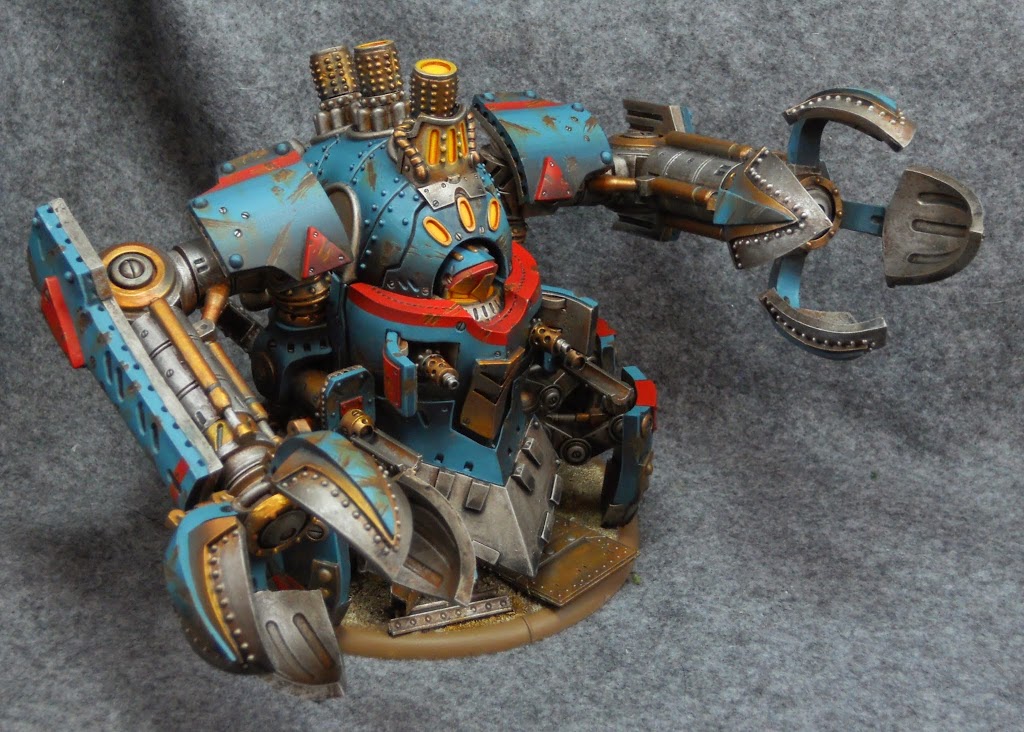