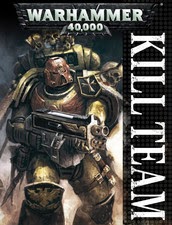 Today we take a detailed look at our newest way to play Warhammer 40,000.  It’s time to get up close and personal with Kill-Team.

As the holiday cheer continues GW keeps on releasing digital content at a blistering rate. One of the most anticipated releases is Kill Team. Kill Team has been with us in one form or another since Rogue Trader days, in fact Rogue Trader was basically Kill Team. The new 6th edition Kill Team expands the lackluster 5th edition Battle Missions book version, but doesn’t bring it to the nostalgic heights of 4th edition.

Kill Team is purchasable for any eReader or Ipad for $12 or $13 bucks. You get about 30 pages of content, with a miniscule amount of filler, as you jump right into the rules and missions.

As a side note, it was interesting to discovered Kill Team was play-tested by gamers and regular GW employees at Warhammer World, helping to create the version we have today. And for those who loved the 4th edition rules of Kill Team you will be disappointed, but that is your problem. The 4th edition rules were a lopsided affair were one side would have all the fun, while both sides flipped counters. The 5th edition version lacked any depth, 6th edition strikes the right balanced ,and with a little imagination easily converted into a campaign or narrative.

So what has changed? Well more importantly, what was added? First off, is the new restrictions or for old timers “Immutable Laws of Kill-Team”

These changes help to alleviate some of the abuses you would find in the 5th edition version. You still have your models acting as their own single units. The Kill Team detachment is also the same; 0-2 Troops, 0-1 Elites, 0-1 Fast Attack. The rules for specialist are also fleshed out, with USRs being spread out between different charts.

One of the better changes is a more unique leader with his own Warlord Traits. These Warlord Traits are all helpful. The biggest change though is how the game ends with the use of Break Tests. Once your Kill Team reaches less than half you must start making Break Tests. Unlike before where it was an open-ended affair of bad or lucky roles, this new version is much more elegant. Each model makes a test, starting with your leader with no negative modifiers. If you pass all is fine if you fail remove the model. Fearless models don’t have to test, but And They Shall Know No Fear must test with an extra re-roll. In addition,Kill Team games end like any other game at a random game length.

This gets to the best addition of all: Missions! The new rules come with six missions. Since Kill Team games typically play quick, all these missions can be finished in one day of play. The missions keep all the standard bonus VPs you find rule book missions, like First Blood, but with an added one called Break the Enemy, were you get a VP for killing more than half your opponent’s team. The missions themselves use objectives to achieve victory, but most objectives are worth only 1 VP, making it critical you get the secondaries. Each mission is also different enough to not get repetitive, and even the “Kill Point” mission has an interesting twist.

Kill Team is still played on 4×4 game board making for up tight engagements. I am sure there are ways to break this new Kill Team, but with the added restrictions is it harder to accomplish. I know many people have love for 4th edition Kill Team, but this new version has depth, putting both players on an equal footing and both using their own Kill Teams . It is also easy to take the Specialist rules and run with them. You can easily imagine a campaign where as long as your Leader and Specialists live they just keep on adding new USRs. There is no reason you cannot add to the specialists lists by bringing back some old 4th edition favorite upgrades, like Gung-Ho or Redshirt.

If you are looking for a new way to play 40k without worrying about too many rules or spending money on models, Kill Team is a great buy. If you are short on time Kill Team is also a great way to get a game in. Games shouldn’t take more than 45 minutes and experienced players only about 30 minutes. The digital price isn’t too bad, though $9.99 would make a lot more sense. My biggest complaint, is GW could have added at least a few rules for creating a Kill Team campaign. Kill Team rules for integrating them into other games.

As with everything GW you are free to change whatever you want and no matter the faults, I recommended this product wholeheartedly!

For even more TastyTaste awesomeness, go check out his review of Stronghold Assault.