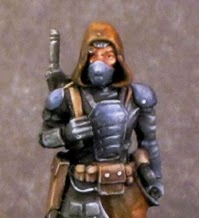 I got a few of the stater sets for the Wreck-Age game recently, and they pretty cool kits.

From the figures to the styling, it’s a pretty slick skirmish level game.  Since I like em, I figured you guys would want to see what this game is all about too!


Similar to Infinity in a lot of ways (except the world kinda regressed as time passed instead of evolved), Wreck-Age is a RPG and 28mm Miniature Skirmish Wargame set in a time after the collapse of human civilization.

The greed of mankind had ravaged the planet near to the point of no return. The wealthy and powerful fled to the stars and left the toxic remains to fester and die. Out of desperation those who remained devolved into preying upon each other.

Humanity remained on the brink for some time, but nature is the great equalizer. The Earth has showed signs of rebirth. This new era is known as the Resurgence, and this is where your community’s tale begins. Wreck-Age uses this post-collapse environment combined with a flexible and dynamic rule set to fuse RPG and Miniature Skirmish Wargame play by emphasizing non-combat Skills and mechanics to give your characters options well beyond the scope of most miniature games. The wild-west meets post-apocalypse genre mash-up creates great depth for narrative play that will appeal to a host of gaming interests.

There are many different mindsets that communities might rally around post-collapse, but we’ve chosen to focus on four for now. The Stakers lay claim to land and work it. They build static communities and are trying to rebuild society in the image of what once was.

Drifters live life on the move, and take whatever is within their reach. They are tribes-people; post-collapse barbarians.

The Reclaimers are looking for the answers to rebuild civilization in lost technology and old data, and they actively seek out the debris of forgotten society for analysis. They are the tech heads and neo-archeologists.

Stitchmen are a secret society of medical practitioners who see all others as fodder for their own self-preservation, harvesting the organs of the young and healthy to revitalize their own failing bodies. They are the ultimate predator, and see no value in anything beyond their own self-centered longevity and survival. You have the option of building your community based on one of four current factions or you may decide to remain unaffiliated. And rest assured there is plenty of room for more.

In Wreck Age, survival is crucial; your wits can be best friend, and sometimes the only reward for a job well done is living to see tomorrow.

Checkout the video below for a quick look at the minis and background of the game, and be sure to hop on over to Wreck Ages’s website as well for more post apocalypse gaming! -MBG