You read that right – come and grab the newly released rules for the BIG Ships headed to stores as we speak:

In anticipation of its release – and the later release of the Tantive IV Expansion Pack – and the massive impact that these massive ships will soon make in your X-Wing space battles, we’re presenting the rules for these huge ships (pdf, 2.8 MB) and the rules for our two Epic Play tournament formats (pdf, 2.6 MB), along with a few words from the game’s developers in which they explain how and why huge ships function differently in combat than all the starfighters buzzing around them.

The X-Wing Developers on the Design of Huge Ships
When we began the design process for the GR-75 medium transport and the Tantive IV, we knew three things:

To meet our first and second goals, the first thing we had to do was figure out a new movement system. We knew the standard rules for movement obviously wouldn’t work for a ship the size of the transport or Tantive IV, so we decided to develop a special, huge ship maneuvering template.

A New Maneuver Template
The template functions a bit differently than those that you use for fighters, but moving straight is still a very simple affair – with one notable difference: the start and end points of the maneuver are both aligned to the front of the ship. For small and large starships, maneuvers start at the front of the ship’s base and end with the template slotted into the back of the ship’s base. This means these maneuvers factor in the length of the ship’s base. Since the transport’s maneuver doesn’t include the length of its base, it covers less distance. Compared to the starfighters that dart around it, it’s a slow, plodding ship that relies on its shield, powerful support upgrades, and the skill of its escorts. The key to performing bank maneuvers with these huge ships is the new maneuver template. It has a right-angle notch that cradles the rear corner of the ship’s front base, establishing the proper angle for a bank maneuver. Once aligned, the ship is moved so that the front corner of the front base fits snugly in the corner formed by the jutting section matching the chosen maneuver. Since the ship is effectively moving from its middle, it creates a plausible sense of drift without excessive fishtailing. The GR-75 medium transport performs a bank maneuver with a speed of “2.”

Though these huge ships feature few maneuvering choices, your opponents won’t want to even think about throwing ships in front of them to slow them down; huge ships obliterate all small and large ships in their way, regardless of their remaining hull and shields. In fact, these collisions don’t even cost huge ships their opportunities to perform actions and spend energy. The end result is that each huge ship poses a threatening presence on the battlefield, challenging your opponent to abandon any action-denial tactics in favor of strafing runs. Another big difference you’ll note is that the maneuver dial includes no red or green maneuvers. Huge ships lack the ability to perform daredevil maneuvers like the Koiogran turn, and concepts like pilot stress and focus simply don’t apply; any focus or stress tokens given to a huge ship are simply discarded without effect. This is intentional. We didn’t want a colossus like the Tantive IV to have to worry about its own maneuvers — rather, it’s the small and large ships that should worry about getting in its way! In Standard Play, the Empire’s Academy Pilots excel at moving early in the Activation phase to block enemy flight lines and limit the actions enemy ships can take. However, the situation changes when Imperial forces come up against the Tantive IV. After the Imperial player completes a series of maneuvers that lead “Howlrunner” and her Academy Pilot wingmen into close range of the Tantive IV, the Rebel player reveals a right bank maneuver with a speed of “1.” As you can see, this maneuver would cause the Tantive IV to collide with two TIEs. Whereas other ships would have to stop their movement when they collide with the TIEs, the Tantive IV simply explodes through them, removing them from the battle. It’s a safe bet the Imperial player will maneuver more cautiously in ensuing rounds!

Energy Huge ships like the GR-75 transport and Tantive IV don’t just fly differently than smaller ships. Their engines, weapons, and power generators can far outstrip those of smaller starfighters and light freighters. To highlight the truly awesome power these ships can bring to battle, we felt it was important to create a new game mechanic: energy. Energy allows us to design truly dynamic effects and power some awesome attacks, all without scaling attack and defense values to the point where the game falls apart. Each huge ship has a limit to the amount of energy it can store, but some upgrade cards, like Bright Hope, can increase the energy limit of the ship it upgrades. Energy generation is tied directly to the maneuver dial; each maneuver generates a corresponding amount of energy. Moving slowly generates more energy than moving quickly, and ships with more powerful generators will generate more energy while performing the same maneuver as less powerful ships. For example, a GR-75 transport performing a straight “4” maneuver generates no energy at all, but the Tantive IV, with its powerful engines and massive power generators, generates one energy even at full speed. Once you complete a maneuver with a huge ship, you generate the amount of energy indicated on the dial. The creation of energy also meant the introduction of a brand new phase, the Energy phase. This is where huge ships truly shine. The phase is totally unique to huge ships, and it’s a key part of every Epic Play match and Cinematic Play scenario in which huge ships are permitted. This phase also provides us with another way to differentiate the Tantive IV from the medium transport, and from any huge ships that may follow. The difference, of course, comes through how they use energy. Though both huge ships use energy, we wanted their battlefield roles to be wholly distinct. A player fielding a GR-75 must make tough choices each round between using its Recover action to recharge its shields, or spending its energy to activate powerful Upgrade cards like Toryn Farr to protect your fighters and strip away enemy defenses. The Tantive IV, on the other hand, is an incredibly powerful weapons platform that is capable of annihilating multiple enemy fighters in a single turn, or blasting through the shields of another huge ship. One of the interesting challenges it presents you is how best to balance the needs of maneuvering its devastating guns into position with the needs of generating the energy that it needs to fire those guns. Will you barrel forward and charge up your Quad Laser Cannons and Ionization Reactor, or will you hang back and fire off devastating attacks with your primary weapon and Single Turbolaser batteries? Despite its limited dial, the CR90 is a surprisingly interesting ship to fly. The end result is that the new movement template and energy rules perform critically important roles in distinguishing huge ships from smaller starfighters and light freighters. The new decisions and tactics that they mandate as you seek to manage your maneuvers, energy generation, energy consumption, and squad synergy ensures that they present X-Wing players with ships that function in an utterly different and distinct fashion, interact smoothly with the game’s other starships, and dominate battlefields with their massive presences. The introduction of these ships also fulfills a longtime goal of the X-Wing design team: They allow us to enjoy fast-paced, exciting, and manageable means of engaging in epic space battles with more of the movies’ most iconic starships! –X-Wing developers James Kniffen, Frank Brooks, and Alex Davy

A 360-degree view of the CR90 Corellian corvette. (Click to enlarge.) Download the rules for huge ships (top) and our two Epic Play tournament formats (bottom). Download the rules and review them today; you’ll soon be able to make use of the new maneuver template and energy rules in Epic Play and the dramatic Escape from Hoth campaign.
The Rebel Transport Expansion Pack is due at retailers by the end of the month.

Author: Larry Vela
Dad, Gamer, Publisher, Pilot, Texan. All games all the time since junior-high. I started BoLS Interactive in 2006. I’m a lifelong tabletop & RPG gaming enthusiast, and internet publisher working to entertain and inform my readers every day. I've been playing RPGs and Tabletop Games since the 1970s. I'm been playing and covering Warhammer and Warhammer 40K for over 35 years.
Advertisement
FFG - Fantasy Flight Games Rules X-Wing
Advertisement 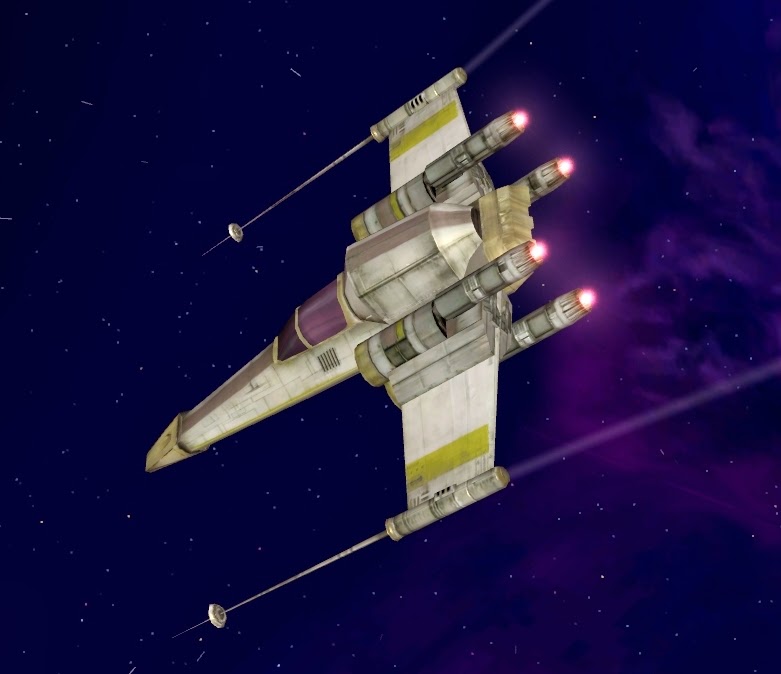