Goatboy’s 40k: What the Heck Should We Do NOW?

Welcome to another wonderful Monday.  For those not living under a rock our gaming world got rocked a bit by a new rules release this past Friday – HOLD ON TIGHT!

Welcome to the age of 7th/6.5/Why Edition 40k. For better or worse we got a brand new book with new words in it and better pictures.  I felt 6th just needed some small changes to help settle it and while any effort in fixing things is appreciated I do feel 6.5 did not do enough to justify a new book.

But hey – I am not a games designer so what do I know right?  So with that intro out of the way I want to talk about what I think us as a community should look into doing.  I am tired of the constant in fighting between the cliques about what should be done to save the game.  Heck it got annoying enough locally that the guy running the tournaments has decided to step down.

Instead of just being someone on a bigger soapbox I decided to throw my hat in helping run things with 2 others.  We are looking at this from a community stand point and want things to be decided by the majority.  This way we can hopefully shape the environment to at least be easy to get involved with and still be enjoyable.  That is the key I think in all of this – trying to keep both sides of the table having fun.

Heck that should be said at the beginning of all of these books.  Remember jerk wads this game is for fun!  You should both be doing stuff.  Stuff should be dying from both armies.  Heck things should be bloody till the end when one person might barely win because they got lucky holding some kind of secret objective.

So with that in mind we had a small meeting today where we talked with some of the other players and tried to get some ideas down that were fair and enjoyable for more people.  I thought it went pretty well with no real butts hurt and most people coming to a good conclusion.  I want to go over what we talked about as I think a good bit of discussion overall all the communities might be just what this game needs to survive and thrive again.

I for one got tired of 5th edition towards the end.  It got bad when the GK were everywhere.  They over powered you in the psychic phase and just had better everything.  Still they were just marines – albeit super good ones – so killing them wasn’t the end of the world.  I don’t know if we went back to 5th edition things would be better with some of the new armies.  But that is a storyline for an alternative dimension where I might have wings, hooves, or laser eyes.

Here is what we see as the biggest issues so far with 7th:

Crazy Force Orgs
The first thing we all talked about and agreed one was to reel in the force org issues.  This new edition lets you play whatever you want.  While this is fun in a limited setting – for fun, narrative, etc – it isn’t good for any hope of competitive play.  So we decided you could only have at most 2 sources for your army.  This could be from any source and a formation would be a source as well.  So you could have GK + Marines or Inq + Etc.  This would limit some of the nonsense you would see.  A formation would count as an Ally as well so those options are not thrown out (hooray for Nids).  I think this limit is for the best and mixed with only being Battleforge armies would try to limit the insanity you could see on the table top.

Lords of War
We want to let Lords of War in and thought that a max 35% of your Points allowance is all you can spend on the bad boys.  This should leave most crazy ones at home and still allow for some insanity.  If we feel they need to get more access we can always change this.  Getting Cover and Invulnerable saves from most of the D’s effects is a good step in the right direction.  I still think they should force all saves to be rerolled but again – I don’t got that designer ribbon to mean my changes would make sense.

Allies
From here we talked about saying no one can take Come the Apocalypse army choices as well but we would have to test some of them.  The real strength comes in Battle Brothering with stuff as the new Psychics are extremely strong.

Psychic Craziness
The Psychic phase was the next topic and we think there probably should be a limit with how many dice you can start with.  We talked about 18 dice as the initial test number as regular armies don’t come near that amount and the crazy psychic heavy armies should still be workable with 18+d6 power dice.  I really wish 40k would have done the Fantasy system as I feel it is elegant enough to allow for cool spell throws but at least it isn’t too game breaking.  But alas I am not a game designer by trade so I can just coach from the armchair.

I know this Monday I plan on playing a game with a ton of Psychic dice to see how bad it really went.  Heck it is why we also implemented in the idea that you have to have real models.  No proxying stuff as their needs to be some kind of limit somewhere for this type of thing.  We thought if the conversion had effort in there that would be allowable as a means to not stymie creativity.  It all becomes a slippery slope when judging that so just starting it at – you need the model is one way to limit some warp gate shenanigans.  I think I have 30 Horrors, 60 Daemonettes, 20 Bloodletters, and 20 Plague Bearers but I am crazy and have too much plastic crack.

Ahem – About Invisibility…
Speaking of Psychic spells I think Invisibility might need to be on dock for a change/ban/etc.  That one just seems to powerful to allow in regular play at times.  Deathstars just seem to be set up perfectly to abuse this.  Heck speaking of spells I think the Deny mechanic – while interesting – might need to be amped up a bit.  We thought it could be cool if every 6 removed a success from your opponent.  This would mean one six rolled could be how you stop that spell.  It also means your opponent might want to throw more dice and have the threat of a perils or lack of further casting options.  I think small things could make this phase really sing and would love to talk to GW about it.

Mission Cards
I tried out the Maelstrom cards as well and think while interesting they really add a lot of book keeping in the game.  I am wondering if just the table has cards and both players have till the end of their turn to complete the missions.  That way both players have access to it and it isn’t happening that one game just gets out of hand for a player.  I think the idea of changing mission types is pretty interesting and maybe even if the player has the option to remove a card at the end of their turn might lead to some crazy games.  Oh I know you will score this at the end I discard this one and draw another to add to the scoring pool.

Just the FAQs Ma’am
Right now we are waiting on some FAQ’s to come out and fix items that are either broken right now (Spell Familiar, Ghost Helm) or just don’t work at all (Fiends, Shadows in the Warp, Reinforced Aegis).  I hope we see them soon as I feel the game is pretty broken right now.  I played a simple game with only one caster vs 2 and thought it worked out ok.  I got lucky with rolling hot.  If you are rolling 5+ like its a 3+ then usually Daemons win.  I didn’t do any summoning as I was running a CSM sorcerer.  We played that Spell Familiar didn’t work in order to just test some things.  It went ok and I wasn’t upset at the game.  I won in the end as I ran away with the extra VP points by completing things all over the table.  Once his psykers died I was able to roll Endurance and get it off without having to worry much.

Until we see a major event with this new set and the FAQs we should limit our discussions on true changes.  I think changes at the top of the game will be for the best as going into the nitty gritty of it just leaves the realm of community rules and ends up in basement rules.  I am ending this chat with a terrible list idea that I might try out.  It is all about beating up on people with bad choices.  If I can win with this unit choice then I must be ok at 40k eh?

The Heldrakes have Autocannons as you need some hope to pop vehicles.  The Maulerfiends run around your Possessed unit especially if you get Cursed Earth.  I hear 4++ save Maulerfiends is pretty hot right?  Plus this list looks crazy as all get out of on the table top.

The Sorcerer Lord is a Daemon, has a 4++ save starting out and other fun rules.  Roll on the Evil Daemon table while the Nurgle Sorcerer Lord rolls on Biomancy most likely.  It could work and looks a heck of lot more interesting then anything else we have seen laying around.  And hell you got an out with Knights if you charge two Maulerfiends in.

Hopefully this Monday we have FAQs so whatever chicken little thoughts will be left behind.  Until then keep on throwing dice, having fun, and hopefully giving your opponents a good game. 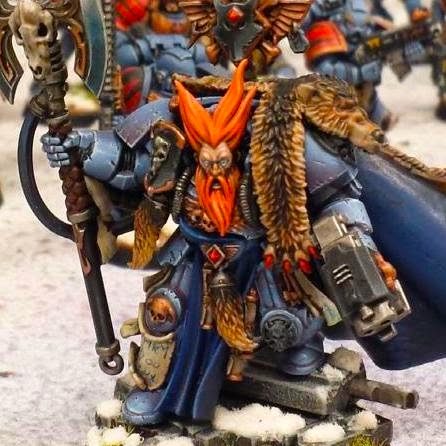