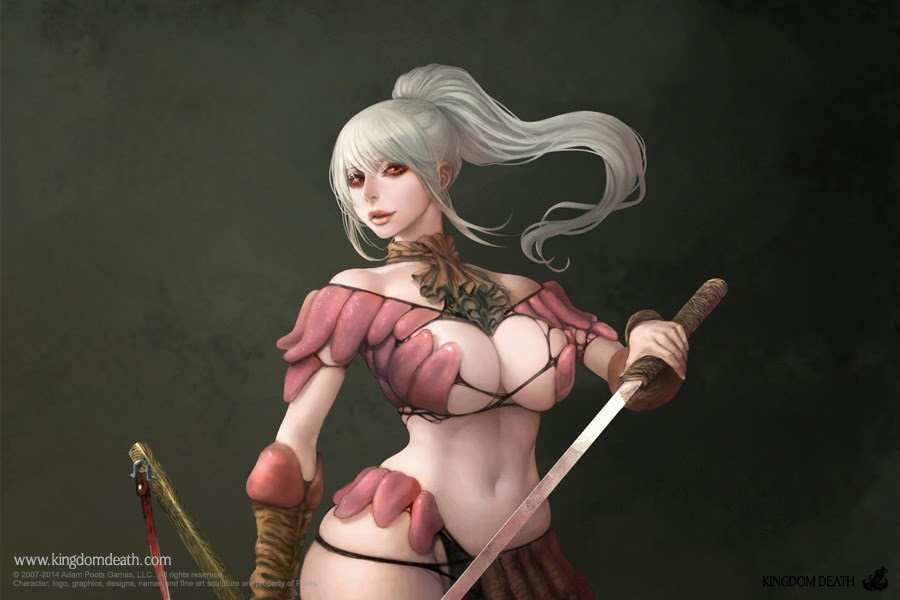 Today we’ll be unboxing something completely normal. Don’t say I didn’t warn you. Yes that’s right. Within this box is Kingdom Death’s take on Satan, Beelzebub, the worst enemy of all mankind – whatever name you care to choose really. So if there’s one thing you can be sure of, it’s that the aforementioned contents will be in no way inflammatory, offensive, or remotely controversial.

Alright, now lets dive face first into some sacrilege. It’s about here that things are going to start getting pretty NSFW. Satan is a two part affair. Something about hermaphroditic twins trapped in fragile human frames. You can read it all right here. So this modestly dressed young lass with her perfectly average proportions is only half the picture. In accordance with current fashion trends, she’s wearing a lot of tongues. I’m pretty sure there were a lot of tongue outfits on last season’s project runway. Of course the first rule about tongue apparel is to never have too many tongues. Tim Gunn would not approve. And what good is a tongue outfit without a matching tongue headdress? And lets round out the ensemble with a powerful little bit of sacrilege. This is the head of the staff.

I’m going to go ahead and show the rest of the staff too, since it’s packed with detail. If you managed to nab a Satan of your own, either initially or from the upcoming resculpt run, the staff should come as one piece. Unfortunately shipping was pretty rough on mine. Tongues make great pants too. Gotta hurry and get all your tongue wearing done before Labor Day. Don’t worry, it’s not like she’s just going to just go letting her ass hang out in the breeze. There’s a skirt to cover it with. We’ll show that in a second Here’s the katana. There’s a lot of fine detail in the wrist wraps that my camera just can’t quite hold. And here it is; the dick skirt. It’s caused a fair share of scandal online. Which I just don’t get really since there are a lot of minis out there with dick skirts. So many in fact that I’m sure you’re asking yourself “of all the minis out there with dick skirts, why should I go with this one?” Well first, all the dicks appear to be circumcised, so this skirt is more hygienic. Additionally they’re all of roughly the same size meaning there weren’t any non-standard dicks used in the making of this skirt. A lot of times these skirt makers will service their dicks from pretty much anywhere and you get a skirt with an unsatisfactory non-uniform appearance. Not the case here. You’re looking at a dick skirt unmatched in quality. ~ And I’ll leave you with a shot of the cool art prints. Thanks again Kingdom Death!