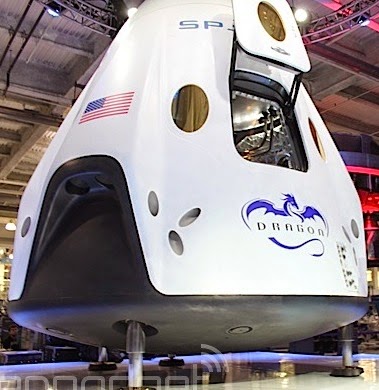 Get ready Marines, the word’s first working drop pod takes to the skies with humans in 2016!

SpaceX Dragon V2 can seat up to seven passengers, use thrusters to land on solid ground SpaceX’s Dragon capsule has been taking cargo to the International Space Station since 2012, but it’s done so lacking the chops to shuttle humans into orbit. The firm’s just unveiled the next generation of the spacecraft, dubbed Dragon V2, to remedy that, and it’s designed to do much more than carry people. The new craft is reusable, can hold up to seven passengers and is designed to allow for swapping crew space for additional cargo. What’s more, the vessel is able to land on solid ground with the accuracy of a helicopter — as opposed to splashing down at sea — without parachutes. Using eight SuperDraco thrusters, engines 3D-printed from a superalloy, the Dragon V2 can blast out enough force (16,000 lbf for each engine) to slow itself down for a landing on terra firma. Go check out the article for more technical details and pictures.

~So I’m giving it ten years before the military gets a couple of these.  Hello “Space (US) Marines”!