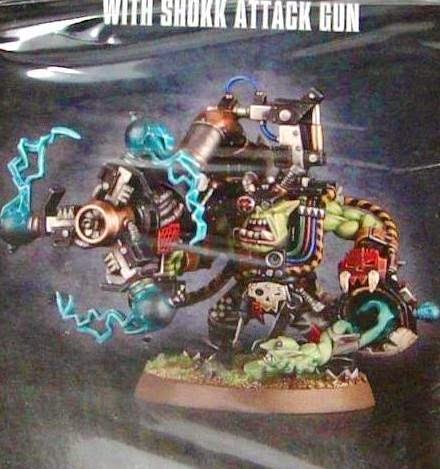 Quite possible the most random of the Orks are now here, the Ork Shokk Attack Gun and Mek Gun Artillery

The new Mek Gun kit features five new wily grot models, with a semi-interchangeable artillery piece that with a little work I think can be made to accept all weapon load outs.

This set contains a ton of great bits for making even more Orky creations, and I would love to see some kit bashes with the new Orkanaut kit! It’s possible that judging by the design of the front of the weapon mount that there may be a new Ork Buggy kit in the works, but I don’t think anything has been spotted as of yet there!

Also released this week was the one sprue semi multi-part Big Mek with Shokk Attack Gun, which while cheaper than the previous versions, may still make it’s $37 price tag hard to swallow.

It does however seem to be way more detailed, and will most likely not fall apart to a gentle breeze like the pewter one did.