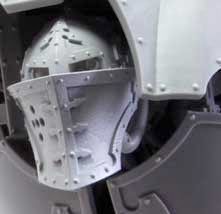 Hold on tight Imperial Knight Fans – the Lancer was only the beginning! Forgeworld has goodies for you:

Forgeworld pulled the covers off the next Impeiral Knight to be released hot on the heels of the Cerastus Lancer: He doesn’t have a name yet, but that is on cool helmet.
Next up is an Imperial Navigator.  This guy will be available at the 2014 Forgeworld Warhammer 40,000 Open Day on July 20th. Is it just me, or does that guy look like he just walked out of the Iron Kingdoms?  Convergence of Cyriss anyone….???

Finally to keep you company, here is a few more shots of the upcoming knight and more weapon options from earlier in the year: Forgeworld “officially” showed off the giant flamer this week, so that leaves these sowh above still to come: