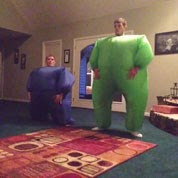 Goatboy here again on another lovely Monday morning.  We got the gift of new rules for my 2nd favorite army –  the Orks.  Now I know a lot of you are reading the giant Waa from the internet land and I am here to tell you – it ain’t that bad.  I know it is different and I feel there are some gems in this book that can produce decent armies.  Heck we thought Nids sucked what they have that are balls and yet they are doing well in events.  So let’s keep an open mind and play some games to figure things out.

Stand Fast, Bring Rokkits!
I won’t go into break downs of each unit. There will be people doing that better then I have time for. Heck I am sure our opinions will be different too but hey that’s the internet right?  I really just want to go into what I want to play and what excites me.  I named this Codex Rokkit Dakka because really that is what you are going to see a ton of.  The upgrade got cheaper everywhere so you better prepare for a crazy 4th of July as the Orks got into a firework factory.  I always used them before and think they will see the light of day in this new edition.

Beyond that I think this book will also cement the idea that we will have Lords of War on the table top.  I am sure people are pissed that Ghaz is a Lord of War but I see it as another way to allow those plastic models in.  I am not sure if we should “ban” certain upgrades (Looking at you C’Tanhole) but it is something we might need to see allowed.  The Stompa does a lot for the Ork army and it would be a shame to not allow a codex to work as intended.

I also think this book will need double CAD to work well.  If you don’t allow the Stompa that double CAD will enable you to create the proper Ork horde with all the odd boyz helping out.  I wish the Weirdboyz and Painboyz were not single HQ choices.  I was hoping we would see an Astra Militarum style build with options to take 0-3 of each.  That might have been too strong but will never know without the options to Double CAD it up.

The big change I see in the book is the crazy new Mob Rule.  I don’t hate it and want to test it more.  I  am just glad we don’t have the Animosity rule from Orks in Fantasy.  The new Mob Rule shouldn’t affect you too much as you should have a boss pole in every unit and most of the time you kill a few boyz.  With proper KFF set up and other options it shouldn’t be the end of your world.  Plus if they are shooting boyz they are leaving your more brutal options alone.  I also see Mob Rule being extremely strong with the Mek Guns as you can join up a Mek to each – get the Mob rule and test Str 4 hits on T7 Grots.  Yeah and you will never run away haha.  I can see why Meks can’t take Bosspoles.

So enough of that – let’s go into some lists.  I know you will see the same type of boyz unit over and over because we only have 2 troop choices.  So if you don’t like the CTRL C/V mentality you can stop here and just move on to the comments to complain about another Goatboy list.

So this army has a ton of Missiles – let’s count ahahah.

No too bad – plus you have some solid defense in the KFF around most places.  You will use the Morkanaut as you center piece to help hold the line.  It is a fairly static list with only the Warbuggies outflanking.  I think the big Mek Guns are going to be strong especially with just the regular Kannon option.  I wish we could still take a Runtherd with them – but a Mek can keep them locked down.  Will this thing work?  Maybe and for a lot of people they will only need to buy the Morkanut to complete this out.  Heck I need to figure out a good Warbuggy conversion as the one they make now is full of turds.

Next list idea is moving away from Double CAD.  The idea fits into a all in your face all the time.  I would love to use that Waaagh all the time formation but I don’t know if people will allow it – and if it is worth it.  Not getting objective secured sucks so it will be hard to justify it for any kind of event where you will face pods and massed troop lists.

This is a 1850pts list to mess with.  It is fast and has a ton of models they have to deal with quickly.  You also have enough guns to hopefully knock down things, blow up vehicles, or cause issues.  When you play a list like this you have to just move the front batch of models the distance you are moving – then move the horde behind.

This one is pretty dumb too – but it shows the power of a Mek’d up Stompa.  Fix it as it breaks up – it can run around and throw out a ton of shots.  Loota shots or Mega Kannon shots.  Plus you got boyz running around and it shouldn’t die to one turn of shooting.  The fearless bubble of the Stompa should help keep you in check.  Plus you shoot a ton of Mega Blasta shots if needed.  It probably won’t work as you need the Stompa to well – win you the game but it sounds fun.  Plus I could use the Stompa I have in a box.  Woohoo!

So are Orks Good?
So far I think the Orks might actually be a lot better then the first look.  I think the amount of shooting it can crank out mixed with the ability to assault is pretty strong.  Plus I think Mob Rule will work out to be a much stronger rule then just straight Fearless.  We’ll see as the months go on and I figure out a better way to make Warbuggies.  I hear Kromlech has some nice ones.

~Do you think Rokkits and Lords of War can get the job done?

Author: Thomas / Goatboy
Thomas Reidy, aka Goatboy, the ever-evil member of BoLS. I do arts, play 40k, and even paint a lot of stuff. I have been playing Warhammer 40K since the 1990s, and have won multiple national events including Adepticon and GW GTs. I've been writing for BoLS for 15 years. Look at my Instagram to see what I am working on - or working on for someone. I am always doing something hobby related.
Advertisement
Orks Warhammer 40k
Advertisement