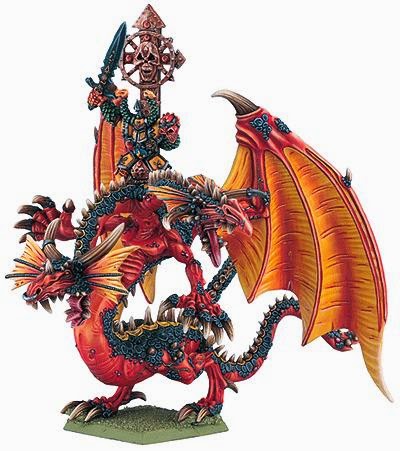 LOOK! Up in the skies – it’s a two-headed Chaos Dragon – or TWO!  Here’s the latest on whats coming up for Chaos!

Steve the Warboss chimed in with this:

“Van Horstmann gets a Multi-Kit to build either him or Galrauch.”

That would be THIS Van Horstmann:
Egrimm van Horstmann
Yes it’s German – you english loremasters get translating!
He has been in and out of various editions of the Warriors of Chaos armybooks over the years.  Van Horstmann is a fallen leader of the College of Light who fell to Tzeentch, and fled the Empire with his Chaos Dragon.   A coincidentally two-headed Chaos dragon named: Baudros.
Thus he would make an ideal combo kit for Galrauch, with some alternate heads for both beasties.
This makes me think that like the Nagash Mortarchs astride the Dread Abyssals,  Chaos Dragon riders may be the common denominator for Archaon’s lieutenants…
End Times Rumor Roundup
~It’s going to be very hard to keep up with the End Times –  I’m still reading Nagash!