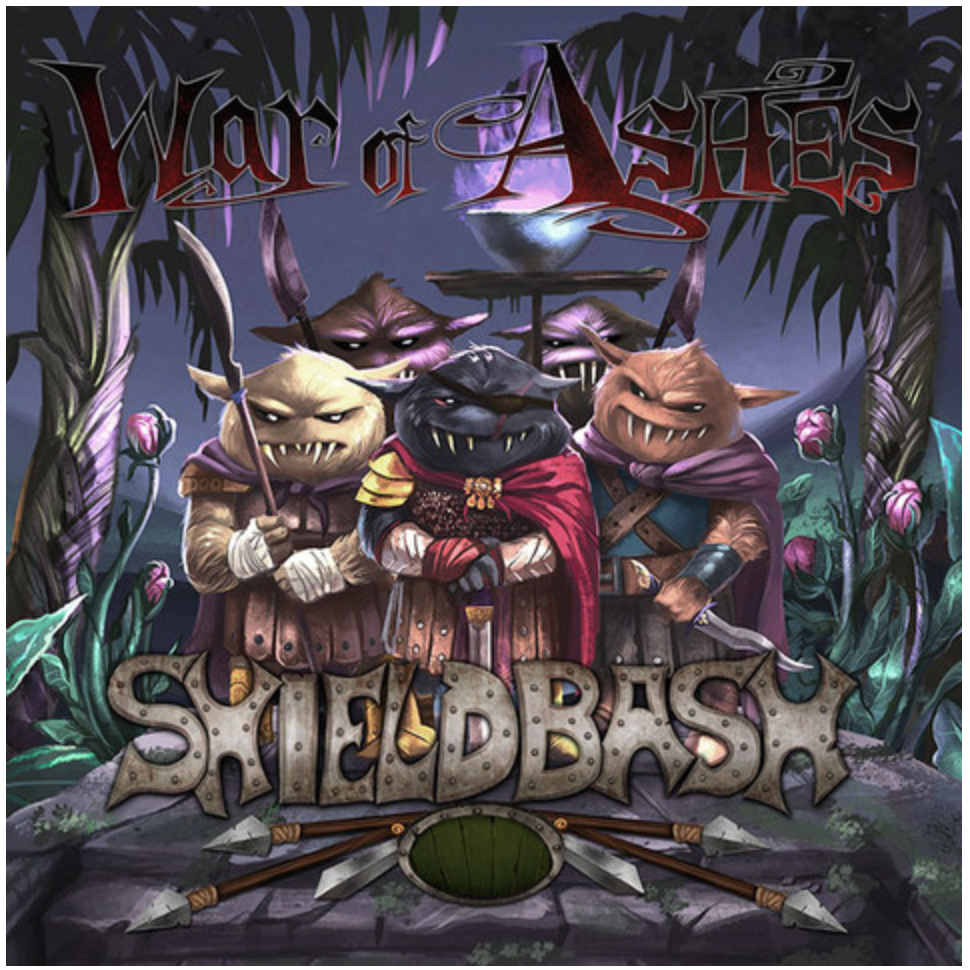 War of Ashes: Shieldbash is a skirmish game from ZombieSmith. I was able to play a demo of the skirmish game at CelestiCon and found the game play very enjoyable, and the miniatures absolutely adorable (not often you can say that about a miniatures game).

The Labor Day weekend seemed to be filled with gaming conventions.  I was able to get down to Freemont for CelestiCon.  Not a huge convention, just the local gaming community having a good time.  Some of the highlights:  Warhammer 40k tournament, Malifaux tournament, RPG gaming, borrow a board game areas, a kids gaming room (awesome idea by the way), a “paint and take” station, and a few vendors.

After painting a few minis with my son, we made our way over to the ZombieSmith booth and spent some time playing a demo round or two of Shieldbash.  Lets dive in to the background and a bit of the rules before I give you my review.

From the lore – “Long ago, on the slopes of the Atronian mountains on the island of Sentia, lived a peaceful and simple people.  For a long time they lived in innocence, but eventually a drought shriveled the river berries and sting moss they lived on and famine ensued, forcing them our of their ancestral lands to search for food.”

Unfortunately, the sky god Agaptus wasn’t too good at helping and made things a bit worse (read as killed off a lot of people, like a lot).  The peaceful tribes then run into a group of more simple (yet beastly) beings called the Kuld.  They drive the Kuld back to the North and forget about them.  With the threat gone the leader of the army decides to take control of the society.  This is the start of the Vidaaran Dynasty.  Obviously, those who were in power don’t appreciate this and trick the Vidaar leaders into taking their army and going in search of riches on an island called Garigla.

While they are on the journey (a 300 year journey), the original leaders restore themselves as the Elvorix Kingdom.  The return of the Vidaar army brings about an all out war between the Elvorix and the Vidaar.  To add to the drama, the women of the two tribes decide the fighting is stupid and form a new tribe called the True Atronians.  They head off to live a more peaceful and reasonable life.  I won’t give away the rest of the story, but there is a big catastrophe and more drama.  The fluff for this game gets an “A”.  It is a great story and really helps explain what has happened in the world and the differences in each of the tribes.

Speaking of which, there are six tribes in the game (five with minis right now).

After the return of the Vidaar fleet to Agaptan shores and then protracted war that endued, an undercurrent of discontent ran through both Elvorix and Vidaar societies.  Does (pronounced like the female deer) became fed up with the bucks’ fascination with war.  They could see that both sides were Sentians, siblings separated by futile conflict.  They started departing, no longer willing to participate in such an insane struggle.

The Elvorix believe they are the last bastion of civilization in a world full of chaos and barbarism.  Some say they are cunning tricksters, having fooled the Vidaar into departing on a hopeless quest across the globe.  Others say they are stalwart warriors, as they fight tooth and nail to reclaim their land from the fierce Jaarl armies.  The Elvorix don’t say much about themselves, as doing so would draw the attention of their God.

A long time ago, the Elvorix were ruled by the Vidaar Kings.  The Elvorix built the cities, farmed the land, and wrote the scrolls.  The Vidaar ate the food, burned the scrolls, and polished their swords.  The Vidaar were tricked into leaving in search of the mythic island of Garigla.  The incredibly grumpy fleet of the Vidaar sailed in on the Eastern shore three hundred years later with a score to settle.

The Jaarl used to live on an island to the Northeast, called Murmadon.  The climate was very warm, and lush vegetation grew, for the center was a mountain inhabited by mighty fires.  The mountain was known as Mount Murmadon, and worshipped it as a God, which they called Murmadon.  Such an original tribe.  Something happened around the time of the Great Catastrophe and Mount Murmadon belched forth ash and molten rock.  Most of the island and Jaarl were destroyed.  Those who did escape by ship met up with a returning Jaarl fleet.  They found a new home in the still-temperate areas of Matriga and Sentia.

The insatiable Kuld came from the North as their traditional lands stopped bearing food.  Some scholars claim they were fashioned by a vengeful deity, Kuldarus the Goddess of the underworld.  The Kuld are the living face of the Great Catastrophe.  As if ice and ash were not enough to slowly exterminate the inhabitants of these islands, the Kuld come to devour everyone and everything, leaving only rock and ice behind them.

The mysterious Ki-kak arrived on Agapta only months ago, so there is much unknown about them.  The Elvorix and Jaarl were baffled by them, the Kuld seemed to pause only long enough to test how hard it is to digest the strange lizard people.  The Vidaar were not as puzzled as they had encountered the Ki-kak during their quest for Garigla.  The Ki-kak followed the trail of wreckage left by the Vidaar and arrived here.

So those are the factions to choose from, but hey how do you play this game?  Thanks for asking…

Game play is similar to most miniature games, you build an army, you pick a scenario, you set up and have fun.  The rule set seems to allow for beginners to play with a limited set of rules, and as you learn how to play, you can expand to the full ruleset.

A typical skirmish game is around 200-300 points.  That is between five and ten models per side, depending on your tribe and how you like to play.  It can be even more if you are playing Kuld as they are a horde type army.  This makes getting your army on the table quick and easy.  The starter sets for the tribes are only $20.  You can get the PDF rules for $10, or paperback book for $30.  Either way you go, you are able to get on the table and playing for $50 or less.

Scenarios are played on a 2×2 table, so no need to move all the furniture to get your 6×4 setup in place.  Clear the kitchen table and set up some terrain.  I mean one realm of battle tile and you have a game table.  In addition to being easy to set up, building your army is made simple by the quick reference guide and roster sheets provided by ZombieSmith for free (found here).

The turn sequence is different than other games.  At the start of the turn your opponent draws a card, or whatever you want to use, to determine how many actions you will get.  The cards are numbered 3, 4, or 5.  So you always get 3 actions, but once you take them your opponent will tell you if you have another to take, if you take a 4th, your opponent will tell you if you get a 5th.  Once you have used all your actions, your opponent flips the card and you draw for their turn.  I really like this mechanic as you have to think about what you are going to try to accomplish on a given turn, and not count on getting the same number of actions each turn.

Most actions require a skill check to see if you succeed at the task.  Once you get to combat, it is your might roll vs their toughness.  If you hit a model it is discombobulated.  Another hit before they recover and they are out of the game (not necessarily dead, just removed from play).  So there is still lots of dice being rolled, for those of you into that kind of stuff.  There is also a mechanic of using Froth.  Froth is the games way of allowing you to tip the scales a bit.  You cannot modify rolls, only the number you need to beat.  So you can’t change the result of the dice, but you can make it easier to achieve the result you are looking for.  this is really cool as you use Froth, and earn more Froth throughout the game.

The number of rounds is determined by the size of the army you are playing and the scenario.  Oh, I don’t want to forget the rulebook is full of scenarios.  Each one gives you the full rules for that scenario, including things like weather, fire rules, darkness, etc.  War of Ashes: Shieldbash is a very deep game for how simple it is to pick up and play.  Did I mention they even include rules for flora and fauna you might encounter (spore pods, stampedes, and more)!
If all of this was not enough, the rules also have a section for playing campaign style games with experience gains and rules for injured fighters.  It leaves it up to your imagination how far you want to take the game.
One thing to keep in mind is they are still producing some of the minis.  So, depending on which tribe you pick to play, you might have to wait a bit to get the minis that are not out yet.
Overall, the game is a great fast skirmish game, perfect for me and my son to play in the evening when I get home from work.  The minis are unbelievably awesome and quick to paint.  My suggestion is skip your next 10 Monster Energy drinks and get yourself some War of Ashes goodness.  ZombieSmith did an amazing job with this one, and I am hoping to grow my army to the size where I can play War of Ashes: ShieldWall – the big brother to ShieldBash!
Have you picked up any new games lately?  If you have tried War of Ashes, what did you think?
Follow my hobby life at http://facebook.com/k9monkeyminis
Follow my hobby blog at http://k9monkey.blogspot.com 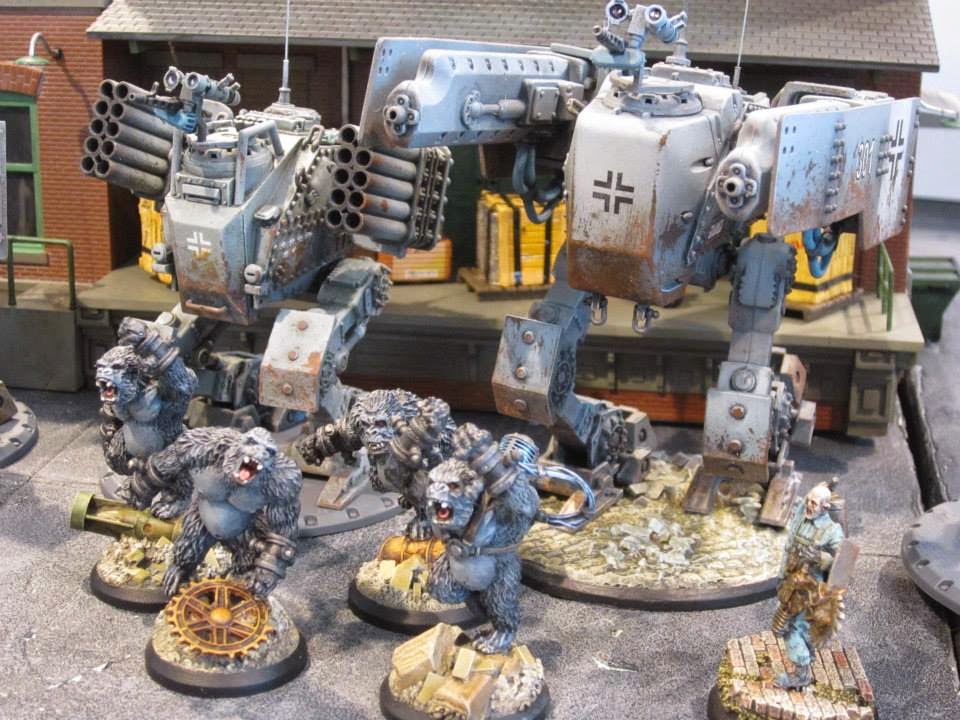