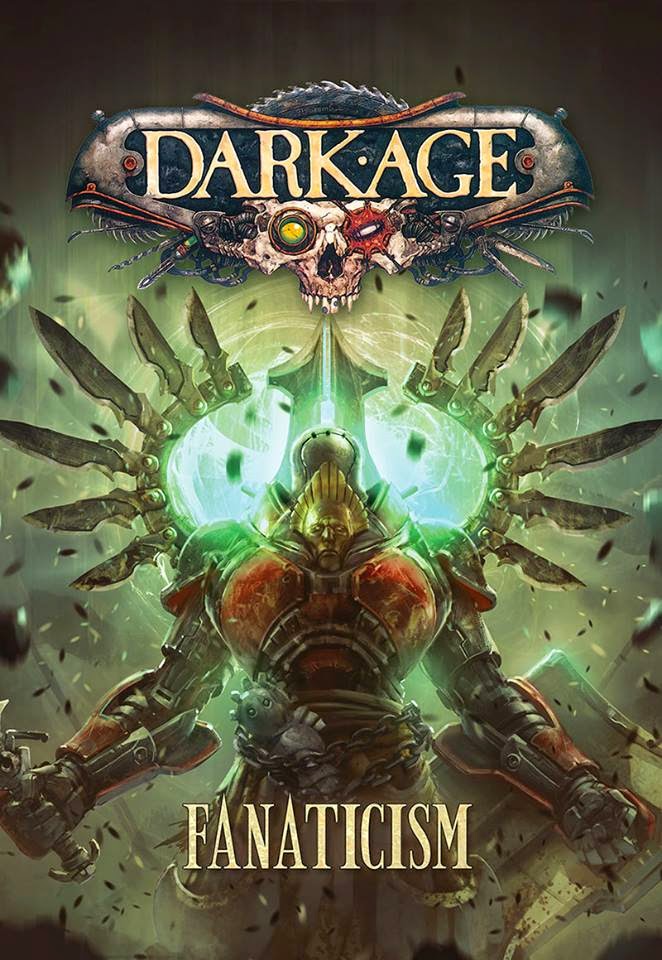 In part one of my coverage of CMoN’s Fanaticism, I’ll be going over the changes this book brings to the ever-evolving Dark Age storyline on the grim world of Samaria.

If you’re unfamiliar with Dark Age, you may not know that this game has a storyline that moves forward with every expansion. As the world changes we meet new characters and watch old ones evolve. The changes in the last two books have not been particularly kind to the Forsaken (one of the primary human factions . First we saw the arrival of the C.O.R.E, an entire “race” of discarded robots united by a malfunctioning central A.I. Then the renegade Saint Johann transformed into a full blown Skarrd Father forging his own tribe amongst this race of mutated barbarians. Not long after that, the Kukulkani arrived bent on killing as many sentient creatures as they could to power up their soul-driven space ships. And just to add a more literal twist to that whole saying about “…into the fire,” the Dragyri Fire Caste rose back to power wielding weapons of a level more advanced than anything previously seen used by that alien race. Lilith is the only model in Fanaticism based on Brom Art.

Unlike previous Dark Age expansions which have always covered at least two factions, Fanaticism is devoted solely to the Forsaken. And wouldn’t you know, it finally brings some good news to that beleaguered people. In this case “good news” means that the generally evil Prevailer regime that brutalizes and oppresses said beleaguered people is fighting back. Hey the status quo might suck, but it beats getting rendered into a greasy tar-like substance and used as robot fuel. Yes the C.O.R.E. also use humans as fuel but I digress.

The woman above is the one we have to thank for all this progress. Lilith is at the head of an ongoing Forsaken technological renaissance. While inherently brilliant herself, she also had the unique opportunity of being tutored by another evil genius. Yep, that’s right, before he was banished for practicing dark and forbidden sciences, Saint Johann taught a young Lilith everything he knew. And I’m not just talking about grafting here. Samaria is a messed up place, and these are two of the most messed up people to call it home.

Messed up or not, Lilith saw the various new powers bent on conquering Samaria as an opportunity. In the shattered drones of the C.O.R.E. she found the technology to create entirely new suits of powered armor. In the wrecks of Kukulkani grav skiffs were engines that could be reverse engineered into jetpacks. Her most important prize may have been a final gift sent from Johann himself. Against all odds Saint Matthew (not a nice guy btw) “escaped” his imprisonment by the Skarrd delivering into Lilith’s hands a body Johann had spent the last few years augmenting with his finest grafts. While already a skilled Grafter Lilith learned even more from what she found in Matthew, and has been applying this knowledge wherever she can. The Archangel Michael
The Archangels are the culmination of all that work. A prime human specimen, augmented by physical grafts, crammed into a highly advanced suit of armor, with a mind wiped clean by psychogenic conditioning. These are the Prevailer’s answer to the saints: Icons of holy power to serve as beacons on the battlefield. And they spout Scripture from time to time in kind of a robot voice. What’s not to love?
But Lilith’s advancements aren’t restricted to the Archangels. She has also been able to create a suit of powered army for Grand Templar Marius, head of the Prevailer military. Additionally, her new mastery of grafting has even allowed her to bestow psychogenics on some of lucky recruits. This gives soldiers like Warknight Captains and Voices of the Prevailers powers that seem divine in nature. Then there are those jet packs I mentioned awhile back that let the newly formed Skylancer corps soar into the heavens. Of course not all the Prevailer military assets are based on new technology. As the ones in charge, the Prevailers get restricted use of elite soldiers like Warknights and the Red Sisters. The Prevailer army has many weapons. And that last part is key: Prevailer Army. You see, the Forsaken faction so far has kind of centered around those saints I kinda mentioned earlier. The Prevailer council that actually runs the Forsaken government has been happy to let these charismatic individuals go out into the wasteland and fight their enemies for them, but that’s been causing a couple of problems. The most obvious is that the saints have been running into some trouble, and there’s a real concern that they can’t handle the growing threats alone. The other problem is that they’ve been doing quite well for themselves, despite all the trouble they’ve been running into, and the Prevailers have begun to see them as a threat to their power. What if some of these uppity saints get a mind to run things then eh? Saint Luke rides his grafted Taurus into battle. My fave of the bunch fwiw.

Of course the ranking members of the Prevailer Council (Lilith being one of these) didn’t get where they are by being stupid. They can’t just go around killing saints. They know what a martyr is. So they’ve developed a more cunning plan to bring the saints to heel. They’ve brought presents: magnificent grafted steeds for their holy champions!

“Oh! From whence came that amazing dragon Saint Mark?”
“It was the Prevailer council that created it, unwashed peasant!”
“The Prevailer Council? Truly they must be wondrous to create such creatures!”
“Wondrous indeed my illiterate simpleton!”

At least I think that’s the idea. Now everywhere the saints go they bring with them a symbol of the glory of the Prevailer government. A symbol of the Prevailer Government that has surely been installed with a means to keep track of the saints riding them. And it doesn’t hurt that they’ll have to check in from time to time to get the creatures proper maintenance. Oh yeah, the beasts are also really good at crushing the Prevailer’s enemies.

So that’s what’s going on in Samaria. But there’s a lot more than that in Fanaticism. The book is more fluff than anything which, let me just say, is fine by me. And I didn’t even go into the real meat of it. There’s also an entire narrative revolving mostly around Saint Mary, her new buddy Joan, and a Clergy Ann named Sarah. Of course since this is really the Prevailer’s book, LIlith and Marius also play major roles. Mostly we learn just how wicked Lilith is, and how powerful her weapons are. But the real bonus is at the very end, where Lilith has a little meeting with a representative from a new faction we’ve been getting hints about. Sorry no more spoilers than that. It’s a fun read and I’d hate to ruin it for you.

~Fanaticism also has rules for a ton of new models, but I’m saving a run-down of those for part two. In the meantime, do we have any Dark Age fans excited about this book?

Author: Ben Williams
Ben Willimans is a Professional Painter and Columnist at Bell of Lost Souls. He has been involved in the hobby and art side of miniatures and the tabletop gaming industry for over 20 years. He has won multiple national painting awards.
Advertisement
Dark Age Lore
Advertisement 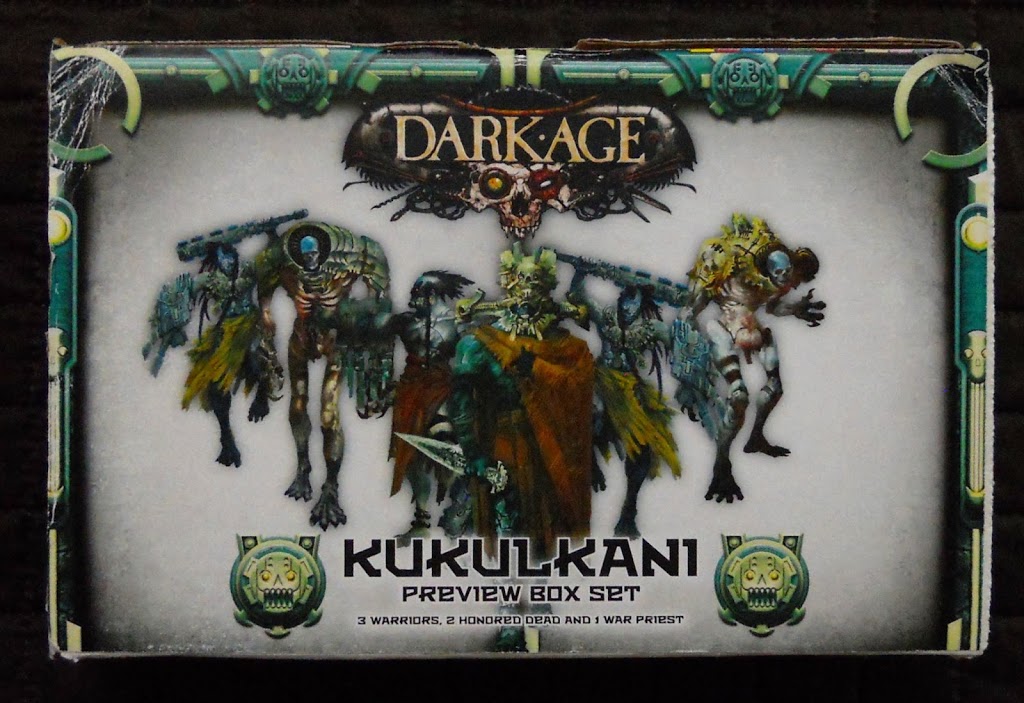