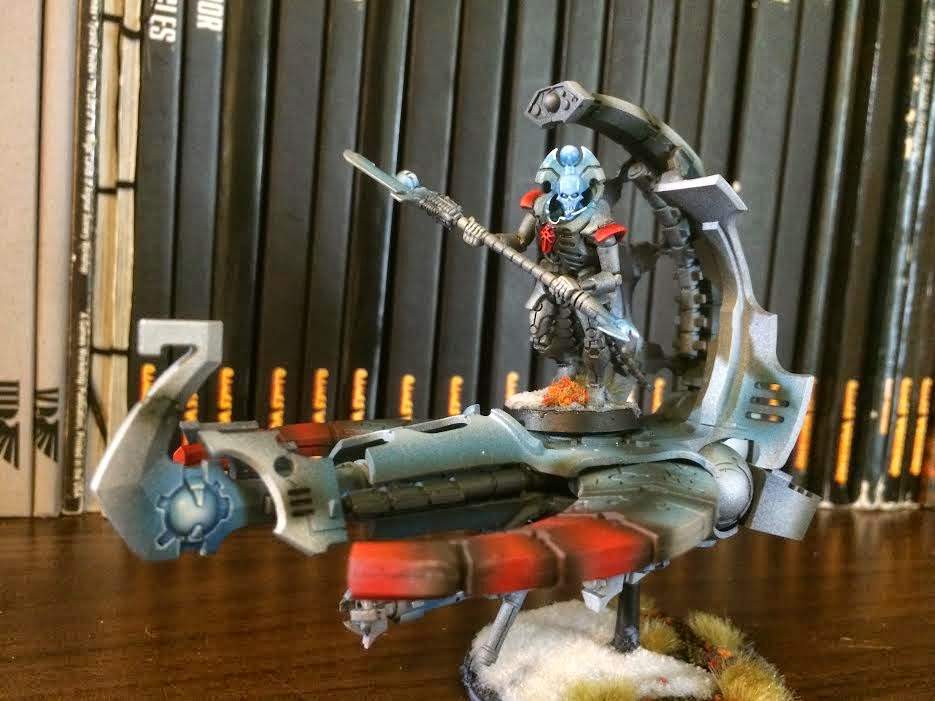 While they may not be as prevalent as they were back at the debut of 7th Edition,  a Necron Lord in Catacomb Command Barge still seems to be a solid unit!
If you’re looking for something to help you in your games with them, check out these top ten things to remember when fighting with/against a Necron Lord on Command Barge.

10. I’ll be back- When a Lord dies atop a Catacomb Command Barge both the Lord and the Barge itself come back if it’s Ever-living roll is successful. See BRB pg. 86 for a specific example. 9. The Command Barge itself is unique in the fact that it basically treated as an infantry vehicle unit hybrid (similar to how a Dreadnought works in Close Combat vs movement), but is still affected by difficult terrain as it moves as a Fast Skimmer. However it treats all Immobilized results as Crew Stunned, and only loses a hull point if it suffers an Immobilized result while charging through difficult ground (BRB Pg. 87).

8. That being said the Barge’s Living Metal rule can disregard effects from any Crew Stunned on a 4+ (and gets rid of Crew Shaken effects on a 2+ additionally ). So it is possible to temporarily disable a Catacomb Command Barge by stunning it successfully outside of combat. 6. When shooting at a chariot the player controlling the chariot allocates the hits to either the rider OR the vehicle itself (BRB pg. 86). So a crafty player can really play the odds here against it’s armor 13 or a possible 2+/3+ INV save on a lord. Remember to make sure your opponent is aware of this before they roll for wounds /armor penetration.

5. Unlike shooting attacks, the player controlling units assaulting a chariot gets to allocate where attacks go in close combat, so bring some Melta bombs and get stuck in! (BRB pg. 87)

4. Keeping #5 in mind it’s always good to issue Challenges to pesky characters who may carry wargear that can cripple a Lord’s Chariot in hopes of killing them or denying their attacks in general if they refuse. 3. Shooting rending attacks are not inherentily a real problem for Barges, as the controller gets to allocate them away as best as possible. However a high quantity of Strength 6 or higher rending attacks can quickly overwhelm that mechanic and bring down a barge. A great way to accomplish this is via the Malediction Misfortune, (as Necrons are not very well known for their Psychic Defense) or tons of Psycannon/Assault Cannon shots.

2. Sweep Attacks are great for taking care of pesky vehicles as the Lord gets to make THREE attacks at Strenght 7 AP1 Armorbane on the REAR armor of Vehicles (Necron Codex pg. 52). I’ve used this mechanic to great effect against poorly positioned Knight Titans. 1. The “easiest” way to keep a Catacomb Command Barge from returning to play after dying from combat is to consolidate so that the player can not wholly place the model within 3″ of where it was destroyed. With some maneuvering most squads of ten or more models can box it out, and Knight Titans are perfect for this as well. Keep in mind too that apparently per 7th Edition rules each time a Lord passed his Ever-Living roll, he awards a kill/victory point to his opponent as he is technically removed from play each time he dies. Which may also technically confer Slay the Warlord as he has been “removed as a causality” (Necron Codex pg. 29, BRB pg.13 Removed from Play, and BRB pg. 133 Victory Conditions; Victory Points, and Slay the Warlord).

Hope that helps clear up the mysterious charioteer some.

40K: Are You SURE You're Building Legal Lists!