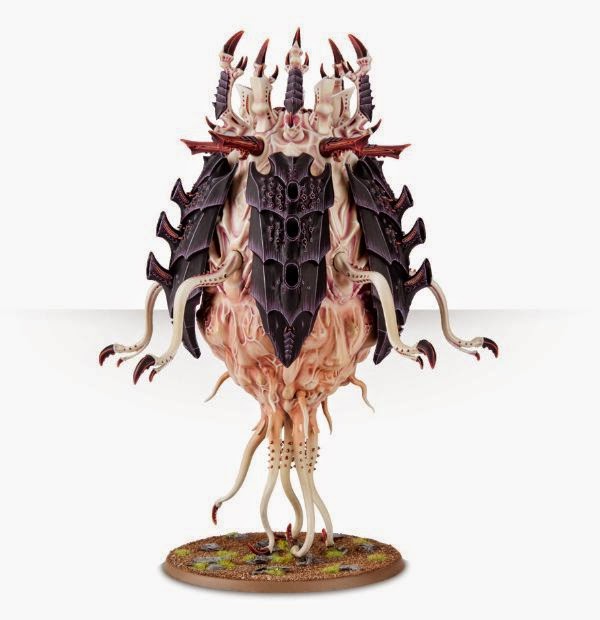 Let’s talk about how to quickly hide model seam lines on organic models. It’s easier than you think!

It’s quick and easy and you’ll save yourself a ton of frustration scraping plastic and kneading little strips of green stuff.

When I first saw the new Tyrannocyte model I was struck with how disgusting/cool it looked, and then by what a nightmare hiding the multiple seam lines would be. The modelers at GW’s do an outstanding job of hiding the seam lines, and the recent advances in CAD assisted design have placed them in a way to reduce how obvious they will be; but those of us that have put a few models together over the years know that a few (fairly) straight seam lines will detract from the organic effect of this disgusting flesh-sac, especially once you start drybrushing and washing the model.

Hiding the lines is a lot easier with tanks and power armor, I usually just scrape the surface flush with a knife, or in extreme cases use a modeling putty like Milliput or green stuff to hide seams and miscast areas. But the scraping method is difficult for a model like this due to the raised edges on either side of the seam. Not to mention a perfectly flat surface on an undulating/veiny model looks conspicuous in its own way. Modeling putty can hide seams but you’re going to have to invest a lot of time and effort blending it in, and then modeling details to match the surroundings so it’s not another smooth patch on your model.

Way too much time and effort wasted when you could be building & painting instead. So to fix our problem we’ll be using water effects. Different companies make different formulations, which vary in how they behave. The most useful ones I’ve found are Vallejo Water Effects & Woodland scenics Water Effects. The Vallejo product comes in a few pre-mixed colors or transparent, but since we’re going to be paining over it the color in this technique the color really doesn’t matter. The major difference between the two products is that the Vallejo is a little softer, while the Woodland is a little more sticky lending it to more fine details. Since we’re trying to mimic the surface of the Tyrannocyte the Vallejo would be the better choice this time (I’ll explain more about other applications at the end of the article). Now that it’s together, we can get our Water effects out and start application… Get a old brush you’re ok with messing up, and glob enough of the water effects on to completely cover the seams. Then, go back and push the gel around to create a few ridges and valleys to mimic the veins and lumps of the model. Leave the model alone for a night then check on it, the gel should have dried to be transparent. If it’s not, let it sit until it is. Then prime your model normally and you’ll have hidden the seams and added some great detail!
Excluding drying time it only took a few seconds of work, and your model is ready for paint.
The water effects have wider applications than this one, and can be used to cover seams and other irregular surfaces on your models. But experiment a bit with different brands to see how they behave before glopping them on. For example the Woodland brand is thicker and a bit more tacky, so it would work better for creating the peaked texture of fur while the softer Vallejo’s peaks would become rounded and not have the same definition.
Experiment with the water effects, and let us know if you’ve found any new applications on your models.
Let us know how you like to hide model seam lines in the comments below.
Thanks to James Wappel for reminding me about using the water effects to hide seams (I wouldn’t have remembered if it wasn’t for his recent blog post), check out his blog for top-notch painting and modeling.
Also thanks to Mythic Games in Santa Cruz for lending me the model to do this tutorial.
and as always, come by Santa Cruz Warhammer for more hobby fun.
-Mike M (cornumortem)

Hivefleet Behemoth: The Movie by GW