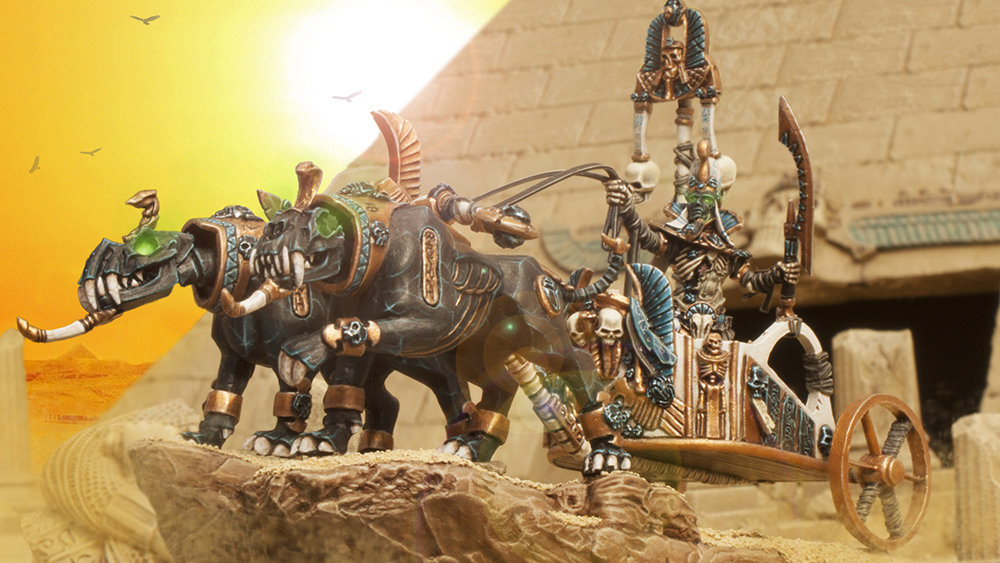 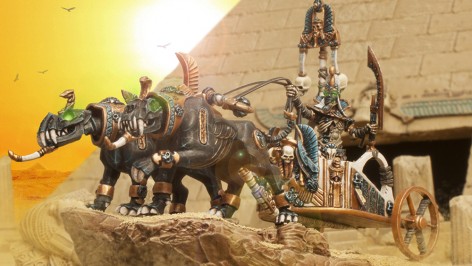 It’s been a long time in the works, but King Pharakh the Vain of the second dynasty is finally ready to lead his legions forth to war from atop his mighty chariot.

If you have been following my progress on this model then you will have already read my Road to the Crystal Brush series that is broken down into Part 1, Part 2, Part 3, and Part 4. If not you can take a look back to see how it all came together. Part 1 covers the entire conversion and build while the remaining three parts cover the painting.

This guy was a lot of fun to make and was a project that I had started planning a long time ago. I first thought this up shortly after the 8th edition Tomb King release and started buying the parts for him back in 2012 for that years Golden Demons. Due to some delays in shipping I didn’t have enough time to do anything with him that year so I kept putting it off. Now I’m glad it took so many years to come to fruition since it let my skills catch up with what I envisioned in my head.

I love the look and feel of the Tomb Kings, and in my mind nothing embodies them more then mummies, chariots, and giant animated statues. Not wanting to have to choose I combined all three of them together.

I don’t want to repeat too much of what I’ve covered in the past installments on this guy so I’ll try and focus mostly on the last stages of it. After I had completed the King all I had left to do was the banner. Originally I had intended to do a large, elaborate cloth banner.

I had started painting it and it just looked odd to me. It was too large and distracting for a model that already had so much going on visually. It was also a very large block of color considering how much everything else is broken up. I ditched my traditional banner about halfway through painting it and decided to go with something that I felt fit the Tomb King aesthetic better. It’s not anything breathtaking but I’m happy with how it balances the model. I was a little worried about the color balance of the overall model once I put it together since I painted it all separately. I think it balances fairly nicely though even considering how dark the constructs compared to the chariot itself.

I did feel like the base was a little too much of one color though, so I added two scarabs on near the back of the base. I think this helped bring a little bit of that darkness to that area.

I also think the king and chariot himself strike a pretty good balance between light and dark colors. I tried to tie the black marble into both where I could. I did this with the mask on the king and the stone slabs on the side of the chariot.

The abundance of black gems scattered around the model certainly helped too. Before I glued everything together I made sure to hit all of the gems with a gloss varnish to really make them shine.

He has a lot more white on him then some of my other Tomb King models, mostly due to the chariot. It helps pick him out as royalty though in my mind.

Despite scrapping the large cloth banner I still wanted to include a little freehand on my new banner. Since I had such a small space I decided to just mimic the designs I had painted on his hat/crown. All in all I am very happy with how he turned out and he might very well be my favorite model I have ever painted. It’s a close tie between him and my Chaos Lord from the 2013 Golden Demons.

I also went ahead and made this army shot of everything I have painted on my display board. I used a few of the tricks GW uses itself in their “army” shots. It makes my collection look very large and impressive if I do say so myself. Of course there is also the picture at the top of the article, which was a little more Photoshop intensive, but is very characterful if I do say so myself.

I also have the video I made for it below. I have put a lot more effort into this one compared to past videos, including new editing programs and a motorized turntable. It also features a song written and composed by Adam Harvey (Ultramarines, The Lord Inquisitor) just for this video. He has contributed music to past videos, but it was always something he already had completed. I am beyond happy with how the song turned out am so grateful that he decided to donate his time and talent to my video. You can follow him on his Facebook page. Without further ado, here is the video below.

As always be sure to vote for it on Cool Mini or Not here!