40K Rules Conundrum: Have You Been Denying The Witch WRONG?

How the heck do you Deny the Witch, and have we been doing it wrong all along?

Triggered by the new Eldar Runes of the Farseer rule, but inspired by perhaps the need to really deal with other things like Invisibility, and other blessings, today’s rules conundrum may have far reaching implications! Let’s take a closer look.

Does the new Eldar Runes of the Farseer always allow the Eldar player to re-roll dice when attempting to Deny the Witch (whether the character or his squad were the target of the power)?

TWO-FER: Just that simple question alone seems to open up another can of worms because the Grey Knight’s Aegis rules allows them to re-roll rolls of ‘1’ when attempting to Deny the Witch also.

So can the Eldar re-roll all their dice, and the Grey Knight’s their 1’s for all Deny the Witch attempts?

Here’s both of their rules respectively: 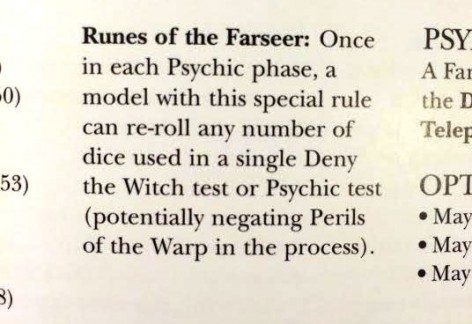 I’ll admit the inclusion of ‘a model’ verbiage to the ability adds a layer of complexity, but let’s keep going with the break down.

And now the process for Denying the Witch; 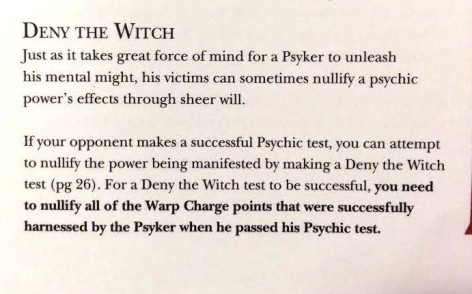 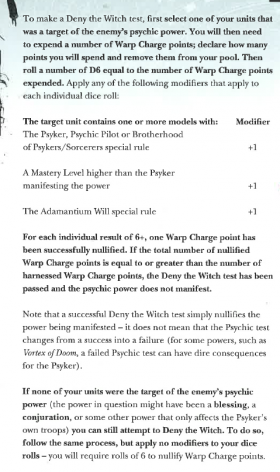 Now lets pay close attention to this last paragraph from page 26 of the 7th Edition BRB.

So it seems that even if none of your units were the target of the power, you CAN still DTW.

However the verbiage on the Runes of the Farseer rule says ‘a model’, but nowhere in this section of the rules on how to DTW does it say anything about choosing ‘a model’ to deny the witch does it?

It does say at the top of page 26 BRB that you; ‘First select one of your units that was the target of the enemy psychic power, then expend warp charge…’ , but it does not bring that same terminology down to the last paragraph specifically.

Or does it? Take a closer look at the picture above.

To do so (attempt to Deny the Witch) follow the same process, but apply no modifiers to your dice rolls.

The process to Deny the Witch thereby being;

1. First select one of your units that was the target of the enemy psychic power

3. Roll a number of D6 equal to the Warp Charge Expended

5. For each result of ‘6’ nullify one warp charge. If the total number of nullified warp charges are equal to or greater than the number harnessed the Deny the Witch test has been passed, and the power is nullified.

So in the case of trying to DTW a power that does NOT target a specific model or unit, following the same process as above,  you must still pick a unit to deny the power, however no modifiers will apply to that roll.

They specifically say you don’t apply the modifiers, but not to disregard the part about picking a model. I feel like it’s like when an instruction manual tells you to repeat a process, but omit step #4. Stating over from step #1 doesn’t seem to make sense, but the only part they said to omit is step #4 so the process is repeated.

This is a logic loop and one of three decisions must be made.

Option 1: That either the process fails because you cannot choose a targeted unit and therefore you cannot deny a blessing or malediction at all, I think we all agree this is not the intent.

Option 2: That the instructions should start on the following line, which if I recall makes no mention of choosing a unit, which is how people have been playing so far in this edition. In this scenario the rerolls for GK and Eldar would not work.

Option 3: That we simply remove the word target from the offending sentence when attempting to follow the process again. In this case you would indeed be able to use the rerolls that GK and Eldar have available.

It sorta makes sense though if you think about it; What if you have multiple characters that can affect the Deny roll right? It’s better to say WHO is making the test so you know what your augmenting options are to the test from the beginning. Furthermore it seems kinda out of place that you chose each model to attempt a psychic power, but you would not choose a opposing model to try to stop it? It almost seems like if you skip part one of attempting a DTW test, you can’t really test at all?

Either way some better wording could go a long ways to clarifying this procedure for sure.

My Proposed Answer: Rules as written, yes you can use either the Grey Knight’s Aegis, OR Runes of the Farseer to deny all Psychic powers, as long as you follow the steps for DTW presented on page 26 of the BRB.

Special thanks to Patrick P. and the gamers from NC Warhammer40k Facebook Group for their discussions on the matter.

RAW or RAI you decide!