A brief overview of one of the major factions of Firestorm Armada: The alliance of corporations that call themselves the Directorate.

Scourge of the Outer Reach, the Directorate is a collective of powerful corporations whose only concern is profit. To the Directorate morality only gets in the way of their endless greed for money and power.

Made up of three primary corporations (Hark Williams, Works Raptor, and Melcon) and various smaller corporations, the Directorate only cares about power and profit. While almost all of the Firestorm Armada factions are shades of grey on the discussion of morality, The Directorate is unashamed to wear the black hat of pure evil, and they do it with style. They have no regard for life and only the highest tiers of the corporate powers get to enjoy their success. Employees are nothing more than a form of corporate asset to the CEOs that control the Directorate. There hasn’t been any protests of living conditions for these employees however, but that likely has to do with an effective HR division… and some biological agents.

The treatment and lack of rights for their armies of workers is just the tip of the ice berg for the vile corporations’ atrocities. The Directorate has used civilian populations for weapons testing, wiped out entire world’s populations, attacked their allies from the shadows, started a war that is consuming the galaxy, and committed complete genocide to a friendly alien race. Yes, they wiped out a race that was FRIENDLY to them, just because they didn’t want to share the worlds that belonged to the alien race. To add insult to the race they completely exterminated, they stole their ship designs (the oval design that is used by the Directorate), and used any survivors of the initial purge for horrifying genetic experiments.

To make things worse the Directorate are masters of playing others from the shadows. Whether its agents infiltrating organizations, “reprogrammed” locals, or stealthy warships. The Directorate has a large pool of methods they use to influence others to do their bidding. Their influence helped push the Dindrenzi Federation to war against the Terran Alliance and their allies, and they continue to influence the Federation from the shadows to insure the war continues.

Their alliance with the Dindrenzi Federation and Relthozan Empire is purely a part of their drive for power. They do not care for their allies and will attack and steal from them without hesitation. Even within the Directorate organization itself companies are cutthroat. Weakness is met by corporate takeovers that usually result in the firing of many of the high level person. Being fired in the Directorate is death as such under performing “assets” would be a drain on other resources such as oxygen and food. This gives new meaning to receiving a pink slip. Due to this, the power within the Directorate is always shifting as new companies appear, others fold, and all are constantly at each other’s throats in an effort to climb to the top. The only real stability exists in the form of the big three founding companies that maintain a level of power no other corporation has had a chance to reach.

The Directorate’s amoral views provides them with a unique advantage in that they will do anything to succeed and profit. Unleashing horrific weapons, and using the dirtiest of tactics is standard practice for the Directorate. Meanwhile their enemies limit themselves to values and morals that the Directorate can twist and use against them. As a Directorate commander remember: profit and power is all that matters. 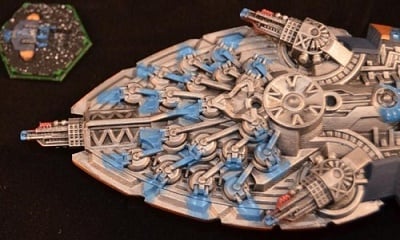 The Array of Plasma turrets underneath a Persecution Dreadnought belonging to the Melcon Corporation.

The Directorate likes to fight dirty and has access to an array of technologies stolen from enemies and friends alike as well as developments from their own R&D teams. One of the best boarding factions in the game, many Directorate commanders rely on the tactic of “corporate takeover” using genetically altered and conditioned soldiers to seize enemy ships. However their boarding strength does not just come from these mindless killing machines, but their ability to “prepare” enemy vessels for hostile take overs. Able to upgrade almost all of their ships’ arrays of plasma beam cannons with biological agent delivery systems, Directorate attacks not only damage enemy ships but fill their hulls with experimental biological weapons killing off enemy crew. Alongside these toxins the Directorate has access with ships with Cyber weapon arrays that allow them to hack in and shut down enemy systems, or just open airlocks and flush out the ship’s crew into space. The Hostility Drone cannot be forgotten with its ability to launch salvos of torpedoes filled assault robots that board enemy ships killing crew and disabling systems. For raw damage Directorate forces rely on massed turrets of Plasma beams to burn through their opponents’ hulls. these turrets allow for ease of target acquisition with large arcs of attack, but a majority of their ships are unable to strike at several targets at once. Also their torpedo launchers face port and starboard preventing their use against targets that are facing their tougher fore armor.

Offensive technologies are not the only technologies the Directorate utilizes as they also deploy an array of defense systems as well. Directorate do not have a universal defense other than their Reinforced Fores, but instead relies on various technologies installed on different ships. Their carrier, heavy cruiser, battle station, and destroyers all field powerful cloaking devices while other ships like their battleships, dreadnought, and battle cruiser favor more traditional shielding systems. Meanwhile some of their cheaper vessels only rely on armor like their cruisers and frigates.

Tactically Directorate commanders are afforded a variety of ships built to specific roles, allowing them to cater their fleets for specific combat tactics within Directorate doctrine. This variety of tools at their command allows Directorate forces to be built for a variety of tasks. Their many nasty tricks the Directorate is a fun and flexible fleet to utilize, and a powerful force in the hands of a good commander. 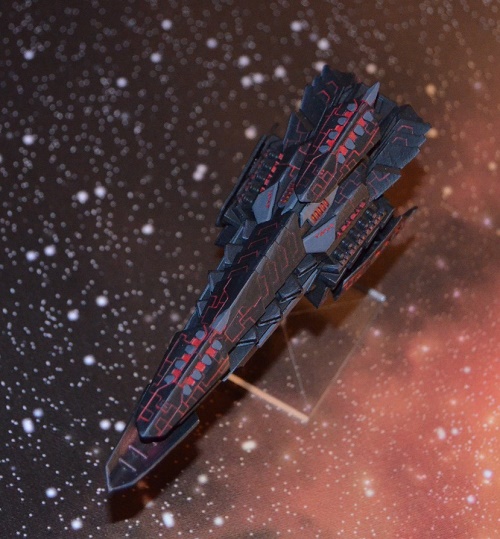 The Directorate’s natural ally is actually the personal fleet of one of the larger corporations: Works Raptor. This corporation is devoted to the art of war, and is led by a partially cybernetic and sociopathic CEO, Lorenzo Thurm. What Works Raptor lacks in diversity, they make up with a single minded pursuit of destructive technology. Works Raptor takes the ruthlessness of the Directorate and adds a level of psychopathic love for destruction, creating a monster that enjoys and profits from the galaxy burning.

Works Raptor fleets rely on advance stealth technology that makes acquiring their ships on targeting systems difficult at short range, and nearly impossible at long range. They utilize beams like the standard Directorate fleets, but they focus more on torpedoes that can bombard enemy positions from extreme range filled with powerful chemicals, or biological agents. Several of their ships are also loaded with modified terror troops that they love to launch at enemy vessels in order to slaughter their crews and capture their vessels. These ships are then returned to Directorate space for research, resources, or to be used in future black operations to insure the war continues to consume the galaxy.

Will you join the corporate forces of the Directorate or fight against their terror?