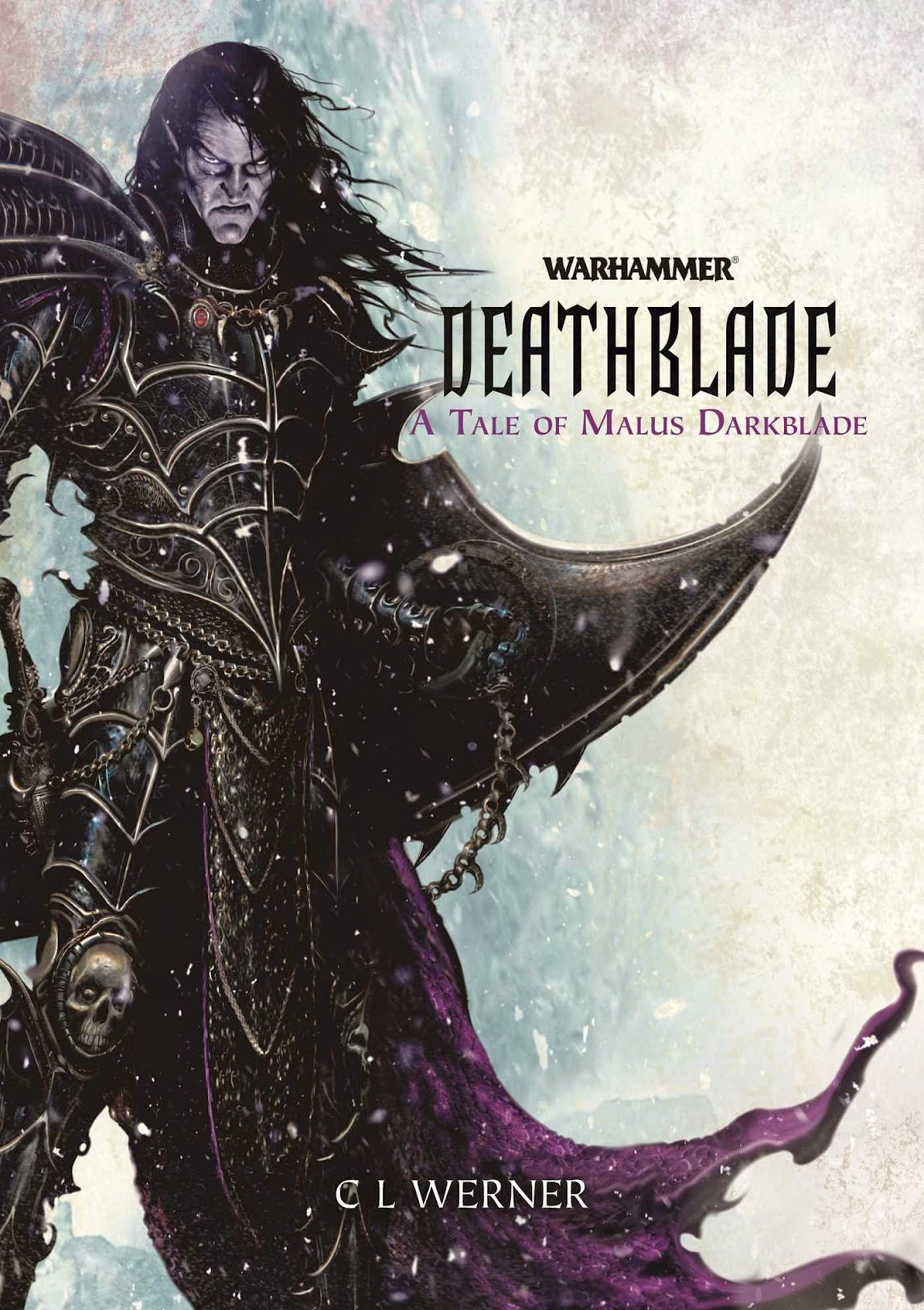 This novel was a bit of an odd one as far as the End Times go. It of course acts as a cap to the Malus Darkblade storyline. So how did this book fare?

I have to preface this by saying I haven’t read any of the Malus Darkblade books. I have read a few of the comics way back when, but thats about it. That being said, I know who he is, and I do know the basic gist of his storyline (“possessed” by a demon, absolutely hates Malekith, etc). The one thing I didn’t know anything of going into this though were the supporting characters, besides Spite, his Cold One.

The novel itself is split into three parts, with the first section of it taking place in Naggaroth, before Malekith abandoned it. It tries to fill you in on a few of the other characters, like his mother, his lover, and his “loyal” friend Silar. For the most part though I was fairly uninterested in what was going on. There was a plot to kill Malekith and steal the throne, which was supported by some other elves of dubious intent. I’m sure this tied into a storyline from a past book, but I had no clue. The assassination attempt itself was a little boring and it seems like it probably wasn’t planned when the Khaine source book was written. It almost feels like it was shoehorned in to fit around the events we know about from Khaine, predominantly, the council of war Malus attended where it was announced they were striking out for Ulthuan. Essentially that whole storyline felt unnecessary and really had little effect on the rest of the novel.

From there we go into part two when they sail to Ulthuan and lay siege to the Eagle Gate. There was a pretty cool assassination attempt scene aboard the black ark that somewhat tied into the plot line from the first part, but nothing could be proven. Once they land at Ulthuan the plot line more or less follows what was written about in Khaine.

My interest in this book came and went as I was reading it. Some parts really grabbed my attention and others did not. It’s not even like it was split between battle scenes and non battle scenes. Some of the battles were quite interesting, others I could have passed on. I think my biggest complaint about Deathblade is that I didn’t really care about any of the characters outside of Malus himself. I know I said I haven’t read any of the other books in the series, which I’m sure would have made me care a bit more. However, I haven’t read more then one other book in the Gotrek and Felix series too, and I still cared about what happened to the characters in Kinslayer. This is because the emotional connections between all of the characters were re-explored in Kinslayer, and let new readers become invested in them. I just never got that feeling in Deathblade. I understand they are Dark Elves, and are ruthless, but even still.

My other major complaint is the fact that it didn’t even really feel like a book about Malus. It felt more like a book about the events Malus was involved with, and he just happened to be there. The ending wasn’t even very strong for him and if I was a Malus fan I would have been disappointed with it. I understand that it has to follow what’s already been written about him in Khaine, but I would have liked to see inside his head more. Instead it just kind of felt like, “and then this happened, the end”. The story even continued on a bit after his storyline was done. I will have to say though, the last bit on the very last page with Spite brought a tiny tear to my eye, then Drusala had to go and ruin it. In fact, I really disliked her character all together, plus we all knew her secret the whole time, just saying.

Deathblade was an enjoyable read, but not anything that stood out from the crowd. It read more like a pulpy battle novel instead of something dealing with the characters. If you want the whole End Times experience or have been reading the Malus Darkblade series and want to see how it ends then I would recommend picking this up. It wasn’t horrible, it wasn’t great, it just was.