Mantic Minis: We. Are. The. Robots. 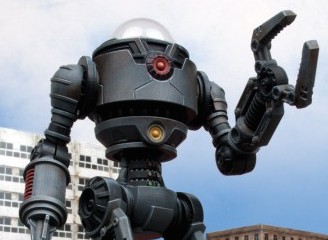 I’ve always been fascinated by robots of any sort. From Asimov’s 3 Law creations to R2/D2 and C3P0 to the Terminator and so on. There’s stuff in the works now that has me just about as excited as a robot otaku can be. There are so many miniature companies putting out great robots. Bombshell miniatures, Wild West Exodus, Reaper Minis, and Mantic Games just to name a few. There is no lack for quality of stuff. I’ve got a few new favorites.

The concept of a big stompy robot is always a classic in pulp science fiction. An enlisted man runs up to the general with fear in his eyes and points to the horizon/cityscape and proclaims “LOOK!” The next shot reveals the towering, clanking monstrosity approaching with giant strides, cutting a swath of destruction, laying waste to soldiers and tanks alike.The general takes off his helmet. “How will we ever stop that?”
This beast is an absolute dream come true.

My new favorite model, the Giant Martian Robot from Mantic Games Mars Attacks really takes care of business. It’s got the great look, similar to the Iron Giant but minus the friendly face and Vin Diesel’s voice. It’s not so overtly alien that it’s unrecognizable but still sinister enough to get the point across. It’s go a nice big grabby claw and an assortment of ranged weapons, a freeze ray, a heat ray and a shrink ray, for dealing with those pesky humans that just are too big to fit in the collection container.

It’s 7″ tall so it’s a great scale for any 28mm game. I magnetized the elbows so I can swap out weapons depending on what I want for the Mars Attacks game or whatever I’m using it for. It is a bit top heavy depending on how you want to pose it but this is easily solved with a massive washer ($1.50) on the bottom for some stability.

The next bunch of robots coming out that I’m super stoked for is the Mechanites Team for Mantic Games Dreadball. The main thing about these models is that they are COMPLETELY customizable. There’s a variety of head, arms, bodies and legs that come in the box. (I’m not sure how many of each at this time but everything I see I like.) There are 5 different sets of legs, a mono-wheel, 2 legs, 4 legs, “bird legs”, and armored quad legs. There 4 different “girths” of bodies, depending on what role they are to play. 5 different heads ranging from a crane head to a quad eye to a tank and 9 different arms, a hammer, a ram, a wrecking ball, a claw, a launcher, an air cannon,a grabber, a hand, and a Dreadball glove. All of these things have something to do with how you quite literally build your team for the fifth season of Dreadball. Point costs for various parts and what they add to your skill stats. All the beta test rules are out and being constantly adapted before official release. In all honesty, they’re just friggin’ cool robots! I can see lots of magnets being purchase in the future so I can mix and match these things. I can see them being put to use in any game where you may want a variety of mechanical opponents or assistants. I’m currently in a Pathfinder RPG Iron Gods campaign and these would be ideal for some of the things we encounter there. With all the steam punk based miniature games in circulation, I see these models as a welcome addition to any.

Another great thing I’d like to see these used in is a robot Dreadball league or even a gladiatorial arena of some sort. A robot fight club? Who wouldn’t want to see that?  Teams/gladiators are given a starting bankroll to create their players/team. Betting for or against your team/player a’la Spartacus board game. Buying upgrades, repairs, scrapping damaged players. Get to work internet!

I’m mostly a hobbyist, which translates into I lose a lot. If you have any suggestions, questions, or just really neat robots, let me know below.