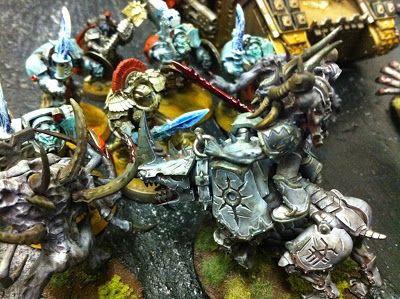 Thinking tactically doesn’t just happen on the first turn of the game. These questions can help you get mentally prepared before the dice are even thrown!

One way to sum up 40K could be like this: the player who makes the fewest mistakes wins the game. Positioning, unit tactics, list building and the like are all important – but mistakes will cost you the game. One way of list building is to construct your army so it can take advantage of mistakes made by your opponent in the movement, shooting, and assault phase. When they make that mistake you pounce on them!

If we want to take advantage of all the possible mistakes our opponent can make on the tabletop shouldn’t we set ourselves up in a good position to exploit them before the game starts on turn one? Here is a check-list of questions that I ask myself at the start of the game as we are setting up, rolling for mission, and picking out deployment zones – all important and often overlooked parts of the game.

As my opponent is unpacking their army I like to take a look at what they have on the table, not only in terms of cool paint jobs and interesting conversions, but to also ask the question – based on the units in their list what is their plan?

Are they running a hard hitting deathstar unit?

Are they looking to exploit one of the phases of the game: Movement (speed)? Shooting? Assault? Psychic powers?

What units are they running that become even more powerful when buffed with a relic, psychic power, or perhaps an included IC in the unit?

What are the real value units in the list and what is there as fodder?

Now we roll for the mission…
More questions to ask and find a tactical solution for:
What mission critical units does my opponent have?
How can I eliminate them at the start of the game (turns 1-3)?
If I can’t eliminate them due to a lack of resources in my own list can I at last slow them down or tarpit them with another unit?
What units is my opponent going to be coming after in my own list?

And finally deployment. I would argue it is one of the most important phases because countless games have been lost due to bad deployments.

Whatever your plan is for your army you need to look at the terrain in your deployment zone and the mission structure. Ask yourself how you can set-up to immediately be in a dominant position on turn one.
While at the same time think about how your deployment can hold your opponent back. How can it lock them in their deployment zone so they can’t move out on turn one to try and get a dominant position?
How can you use your deployment to dictate the flow of the game?
If you’re going second – How do you think your opponent is going to use their movement to effect the game?
Where do you see the majority of the action taking place and how can you position your forces to take advantage of that?

It can be a lot to take in at first – It’s a long list to run through but with practice it can become almost reflexive. This process can help you get your brain in gear and pointed in the right direction. Your dice might not cooperate but at least you can look back on the game and know you started the game off on the right foot.

What do you think? Do you have any pre-game questions you ask yourself to get in the right head-space? Let us know in the comments below.