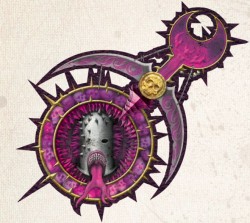 Today we talk of the Dark Prince of Chaos – She Who Thirsts – Slaanesh. Enter if you dare mortal… Slaanesh was fully born at the moment of the Fall of the Eldar. The birth of Slaanesh created the Eye of Terror and slew most of the Eldar except those far enough away from the Eldar homeworlds to escape. This event also slew all the Eldar gods except for Khaine (who was shattered into many pieces), the Laughing God – Cegorach, and Isha – who was, according to one Craftworld, taken captive by the Chaos God Nurgle.

Slaanesh has a neutral attitude to some of the other Gods of Chaos (as he is generally too caught up in his own pleasures to be interested in rivalries or alliances), but his particular enemy is Khorne, whose belief in pain and death is completely opposed to Slaanesh’s principle of a life of unrestricted pleasure.

In the mythology of the primitive inhabitants of Fenris, “Sla Nahesh” (presumably a misinterpretation of Slaanesh) is an evil deity, described as the offspring of the dark god Horus and the dragon goddess Skrinneir, and is imprisoned within one of the planet’s volcanic islands after being defeated by Leman Russ.

As with all the Chaos Gods, Slaanesh will often reward his most favoured followers with special gifts and blessings. Slaanesh’s gifts can take many forms, including physical mutations, daemon weapons or an exotic appearance. The Palace of Slaanesh is Slaanesh’s realm within the Warp. Those that dare his realm risk becoming trapped in its warped delights for eternity. The Dark Prince’s realm is divided into six domains, arranged in concentric rings about the Palace of Pleasure. The palace itself can only be reached by passing through all six domains. The circle of Avidity plays upon the interloper’s greed. The circle of Gluttony is next; it plays upon the intruders desire for lavish foods and wines. The third circle is the circle of Carnality, where the perfect desires of the heart reside; testing to the extreme the individuals desires. The fourth circle is the circle of Paramountcy, where the traveller is greeted by roars of adulation, here the intruder is tempted with absolute power over others. The penultimate circle is the circle of Vainglory. The traveller is presented with his ideal self-image, and if he feels but an ounce of pride, for eternity will this circle be his prison. The last circle is the most perilous, it is a heavenly place, within which resides a seemingly perfect environment. Every second that passes fills the intruder with bliss, but to rest and enjoy the pleasure for a single moment results in falling into a coma, and eventually dying in idle bliss. One may walk the circles for centuries, but cannot for a second give into his ultimate desires for he will fall. If one is able to successfully pass through the circles he comes before the palace and Slaanesh himself. It is impossible for mortals to look upon the god without instantly losing their soul, for all who see it become willing slaves to every whim of the Dark Prince.

Learn More of the Dark Prince’s

~ So, if you had to choose one Chaos God to worship… ?