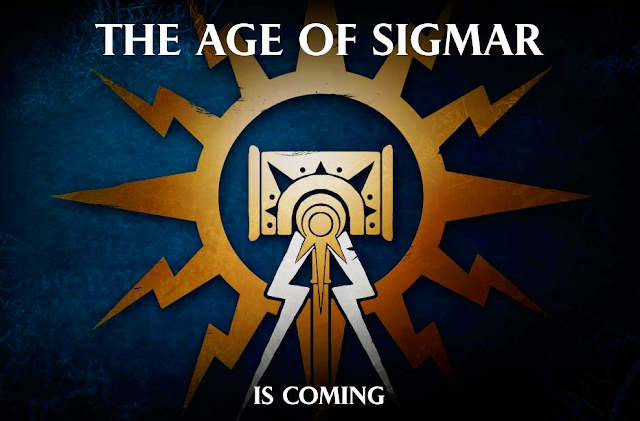 As Illidan Stormrage once said, “You are NOT prepared.” He may have been talking about the AoS rules. Check these out!

The Age of Sigmar rules have leaked and are floating around the web right now. One intrepid adventurer has taken on the task of analyzing those rules and has come up with some questions.

via Avian from Warseer

So I’ve had a night to chew over the rules and even tried out the rules a little. They are somewhat puzzling at times, and I thought I’d do this in a structured way:

The Armies
– Army selection restrictions are literally ‘however many models you want’ or ‘however many models will physically fit in your deployment zone’, whichever is lowest
– You are not told to agree with your opponent what size battle you want to play (unlike 8th edition)

Warscrolls & Units
– Unit sizes are either 1 or 1+. Taking a lot of 1-model units typically gives you a pile of free champion upgrades.
– Models in the same unit must be no more than 1″ apart. This is measured model-to-model and not base-to-base, so it might be closer than you think.
— I put down some Night Goblins and it turns out they have to be within 0.5″ of the guy in front to be in formation.
– It says that unit that end up out of formation must reform the next turn they move, but doesn’t actually explain what that means, or what happens if they can’t get back in formation.

Tools of War
– You measure to and from the model, not the base. For extra reach, model your troopers with arms and weapons outstretched.
— An extra inch from spearmen seems doable.
– Apparently, this game doesn’t use templates at all.

Set-up
– The player who finishes deployment first goes first, but this has very little effect since who goes first in later rounds is randomly determined.

Glorious Victory
– Last man standing wins
– All attempts at balancing are based around model count, not abilities or power
— So if your 10 Chaos Warriors are fighting 15 Goblins, they get a bonus

Triumphs
– If you won your last battle (as a major victory) you get a bonus in this one. It doesn’t matter who you won against.
— Trust amongst players would seem to be required.

Battle Rounds
– Half the time, you’ll have two turns in a row.

Charge Phase
– To successfully charge, you must end up within half an inch of an enemy model. Remember that this is measured model-to-model and NOT base-to-base.
— If you don’t want your models to be charged, have them modeled with their hands behind their backs.
– Yes, you CAN move, shoot with no penalty, charge and fight in melee, all in the same turn.
— Thus, the most powerful non-character models in the AoS box seem to be the angel guys.
– You can charge models you can’t see (ex: around a corner)
– Unless you have a special rule, the charge bonus is extra movement.

Combat Phase
– If you fielded your guys in neat ranks and files, they will probably break formation at this point in order to make their pile-in moves.
– Pile-in moves can leave models who haven’t fought yet stranded and unable to fight as they are suddenly more than 3″ from their enemies.

Battleshock Phase
– Units of 1 (including characters, who are always alone) are essentially unbreakable.
— If you bring a pile of single-model units, you never have to worry about Bravery.
– For each ten models you have in the unit, one less guy will die from battleshock.

Picking targets
– Melee weapons now have a range, typically 1″.
— If you make sure your models are on bases less than 1″ in diameter, you can always attack in two ranks. Does anyone make 24 mm round bases?

That’s quite a list! Thanks again to Avian for compiling those questions. If you’d like to chime in or get in on the action:

Or let us know what you think in the comments below!

I’m sure those questions will get answered in a reasonable amount of time…right??