Warlord: Beyond the Gates of Antares: The Freeborn Are HERE! 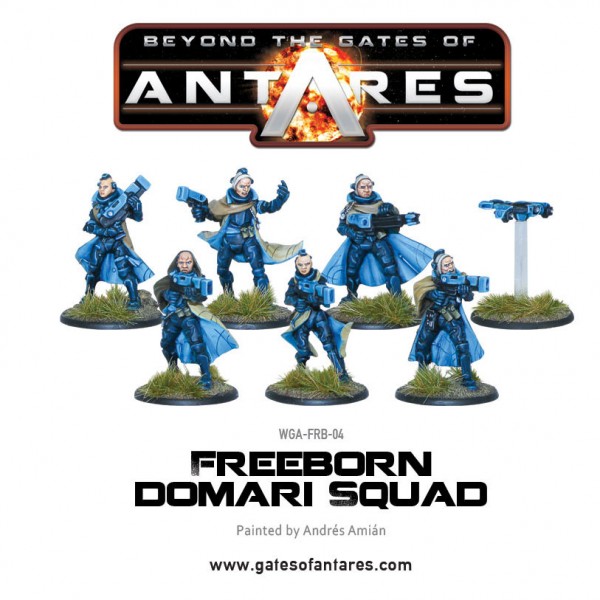 Warlord Games releases a new faction for Beyond the Gates of Antares: The Freeborn – Check these out!

This week sees the release of a new faction for our Beyond the Gates of Antares game – the Freeborn! Whilst many of these models won’t be available for a few weeks yet, you can get your hands on them early with this great starter army deal.

The Freeborn are merchants and traders, pursuers of wealth, influence and power within Antarean space. Their numerous fleets maintain a free-flow of commodities and technology between human worlds and beyond.

The neutral status of the Freeborn allows their ships to travel easily between antagonistic societies such as the Isorian Shard and Panhuman Concord, and the Ghar and Algoryn.

Although the Freeborn maintain a number of hidden worlds as supply bases, for the most part they stand aside and apart from other human societies, recognising no masters but the lord of their own household. A household and its ruler are both known as the Vardo – the lord is the household and the household is its lord. The Freeborn themselves are the Vardari – the people of the many Vardos of Antarean space. Each household comprises a vast fleet that plies its trade between groups of worlds. The ownership of these trade routes is in part hereditary and the source of every Vardo’s wealth. When routes become contested, rival Freeborn will go to war, as happened between the Oszon Mercantile League and Ky’am Freetraders. Feuds between the Vardari are deeply felt family affairs and matters of honour. Feuds can last for generations and are rarely forgotten even after hundreds of years have passed.

Relationships between the households are complex and are often settled by intermarriage between ruling families, political arrangements made between one Vardo and another.

The Freeborn don’t just deal in commodities and knowledge, they also deal in human services, including those of mercenary fighters. These mercenary soldiers are recruited, trained and equipped by the Freeborn from amongst the more primitive worlds of the Determinate and the Spill. When a Vardo goes to war its forces are made up of both Vardari and mercenary troops.

Freeborn have access to all the weapons and armour of Antarean space, but, with an eye to cost and practicality, tend to favour Mag Guns and Reflex Shielding as basic equipment. Amongst the ruling family and their close relatives anything goes, from expensively re-sharded Isorian phase armour to compression carbines and all manner of alien exotica. The Beta Edition of the Beyond the Gates of Antares rules is available to download ABSOLUTELY FREE through the Warlord webstore here – if you’re new to the game, it’s the ideal place to start – with background information, the core game mechanics, and plenty of photographs of painted minis… Check out the Armies at:

Beyond the Gates of Antares has quite a pedigree of experienced game designers working on this game. These models look unique to their IP and Warlord is offering free rules to check out the game. If sci-fi table top gaming interest you now is a great time to start!

I’ve heard it called Bolt Action, “IN SPACE!!!!” Which sounds awesome to me!