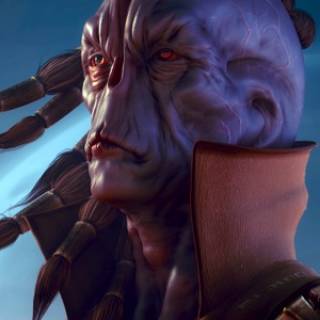 Today we delve into the Tau Etherials and thier mysterious origins.  Come this way Magos Biologis’:

Lore via our sister-site Lexicanum

The Tau Etherials are the leaders of the Tau Empire

Their arrival started the unification process between the various Tau tribes and coincided with the implementation of the concept of the Greater Good. They first appeared during a siege between the Tau of the plains (later known as the Fire Caste) and the Tau of the city of Fio’taun(later known as the Earth Caste). The Ethereals brought the two sides together to negotiate and convinced them to follow the Greater Good. Their power over the Tau is such that an Ethereal could tell a Tau to die and that Tau would do so quickly and gladly. The Adeptus Mechanicus would give much to learn the secret of the Ethereal’s power. There is strong implication from the similarities between an organ possessed uniquely among Tau by the Ethereals, and an organ which Q’orl use in pheromonal communication that this ability may be due to deliberate engineering in the Ethereals’ past.

The Ethereal sometimes lead the fire caste into battle to provide inspirational leadership, so the warriors can achieve more. However if the Ethereal falls in combat, the remaining Tau are struck with grief that causes them to lose battles or they get extremely enraged and charge forward, either way after a Ethereal falls the Fire Warriors lose all discipline and efficiency.

On their foreheads resides a small organ, smaller than the ones the other castes have. Imperial studies on the organ show no biological function, but it’s suspected that the ethereal studied is a dud, or that the way the Ethereal control the Tau is more esoteric in nature

As the leaders of the Tau, the Ethereals are enigmatic and studious, yet unfaltering in their authority and their drive to further the Greater Good. They are mystics and philosophers, possessed of knowledge and wisdom not shared by their more practical subjects. As such they had some part to play in the Tau rapid development, and to this day guide their species in its dynamic expansion, or the castes revert to the savagery that once threatened to destroy them.

Which leads us to the Q’orl…

The Q’Orl, also known scientifically as Bestiola Superior, are a type of intelligent, advanced insectoid aliens that lived in the galaxy who were native to the Swarmworld Loqiit, located in the Segmentum Pacificus. 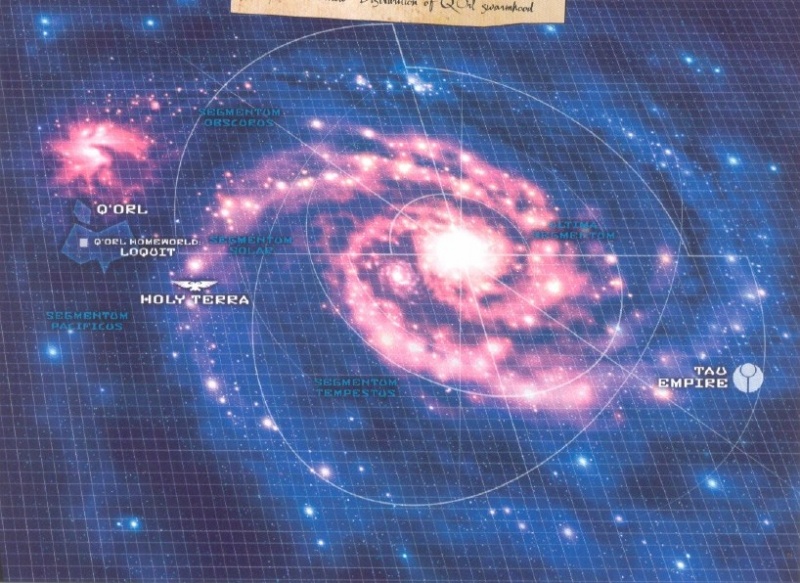 Commonly held theory holds the view that the Q’Orl are the evolutionary descendants of primitive invertebrates of lifeforms native to their homeworld of Loqqit. Whilst all are born equal, there were several distinct strains that are developed within the larval nurseries. This was done so through the use of hormonal soups exuded by the queen which is responsible for siring the entirely male race by laying several thousand eggs every day. At an unknown point, they developed space travel capabilities where they created elegant chainships. In time, they developed advanced spacevessels and became heavily armed though lacking Warp travel capability. As they expanded into space, they began placing planetary marker-stones, deep-space monoliths and archaeological sites containing a rich amount of Q’Orl text. These texts all proclaim the announcement of the “Superiority of the Swarmhood”, their ownership of select regions of space and their ultimate aim conquering the Galactic hub. Their empire was known as the Q’Orl Swarmhood and they were centered around their single holy world.

According to one text, four thousand years ago at the end of the 37th Millenium they became afflicted with some form of disease that may be Chaotic in origin. It is speculated that the disease was transmitted originally from Human settlers and may be attributed to Nurgle. During this time, they were assisted against this disease or Chaos by another race which some believe were the Eldar. After the war against the disease was won, the pointy ears allies demanded payment of was a Q’Orl queen to make an “uncorroded swarm”; possibly a race resistant to disease or Chaos. This demand saw the Q’Orl dissolve their alliance and defend their queen though the Eldar conducted a treachorous act and stole away the queen. Despite the loss of the queen, another newly formed queen-egg was laid starting the reign of the next matriarch though the Q’Orl never forgave the Eldar for their actions.

~ So do you think the Eldar “pushed” the evolution of the Tau to create a new race impervious to Chaos?