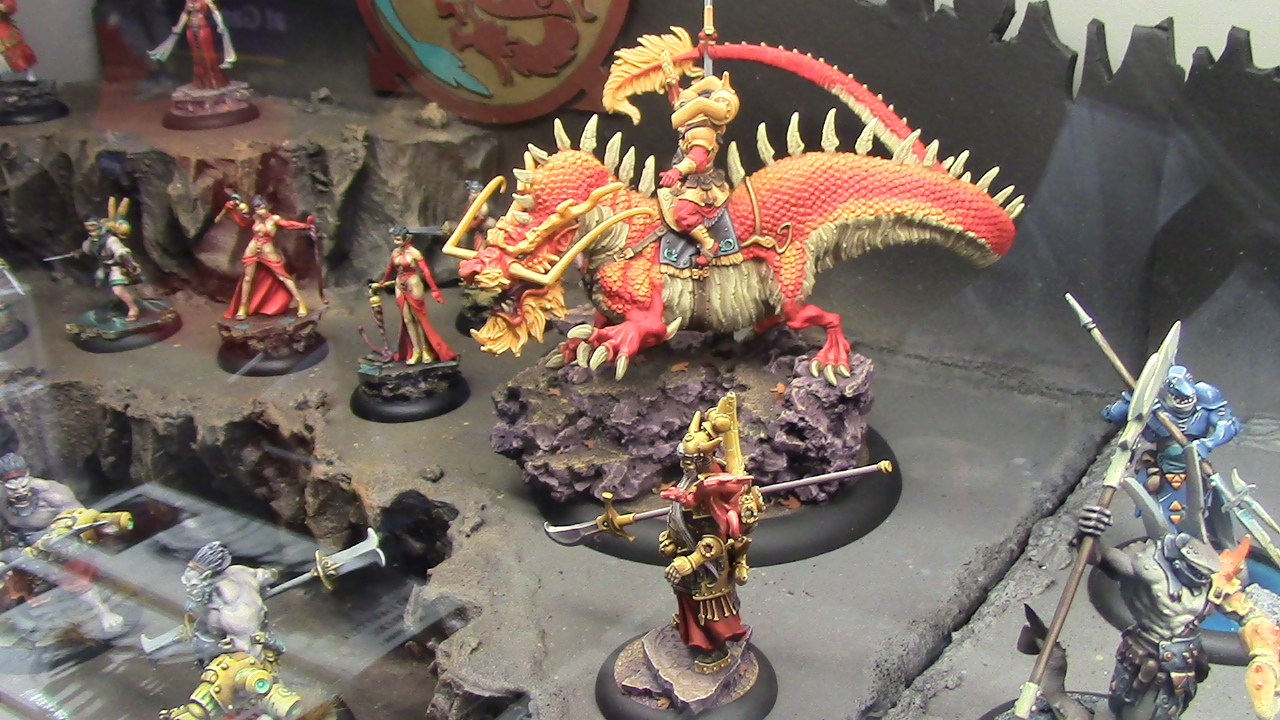 The GenCon 2015 coverage continues with the BoLS Crew’s trip through the CoolMiniOrNot booth. They had a bunch of new things to show off!

Hey BoLS Readers, AdamHarry back with even more GenCon coverage! What? Did you think we were done already? Oh no – we still have a ton of goodies to show off this week as well! We got a tour of the CMON booth – which was poppin’ all weekend long. They were showing off a bunch of new board games and some updates to a few classics. We even got a demo in…but that’s another story! Here’s the video proof:

There is a photo gallery at the end if you just want to ogle all the pretty miniatures – and they were EXPERTLY well done. If you’re just into painting or the hobby aspect of things or if you want to stretch those hobby muscles out – check out CMON’s offerings because they will put your skills to the test (with fantastic sculpts in resin no less).

Rum & Bones – their new game after a successful kickstarter – was there in full force and we got to sit down a take a look at the miniatures. We also picked-up a copy so stay tuned for a full unboxing of that game. If you’re not sure what Rum & Bones is then the best way to describe it is a pirated themed MOBA (Multiplayer Online Battle Arena) game. I know, I know – it’s a board game so how can it be a MOBA? Because it’s a subgenre of the RTS games and… you know what, nevermind. I’ll let them explain it:

Rum & Bones is a game for 2-6 players aged 13+ where players take command of a pirate faction: The swashbuckling Wellsport Brotherhood or the undead Bone Devils. Each side has five characters with a variety of attacks and abilities to fight alongside the faceless crew as they charge headlong across the gangplanks to sink, take, or burn the enemy ship!

It’s a direct head-to-head faceoff inspired by the popular MOBA style video games and brought to the tabletop with beautiful miniatures. Each pirate faction has its own unique theme, and the characters’ abilities combine in startling ways to create killer combos and feats of daring. But, be cautious! Too much power concentrated in one place stands a chance of summoning the mighty Kraken, which can turn the battle in an instant!

So yes – it’s inspired by MOBA style games. But it’s a board game. No internet required! It’s actually pretty neat to boot. And there are a lot more than just the two starter factions. Much like popular MOBA’s there is a deep roster of nefarious pirates to play.

Dark Age was also at their booth – and that game just keeps on going! Many of the older models have been re-sculpted and updated to more modern standards. The Forsaken got a new book and a bunch of cool miniatures as well. This game is a lot of fun and it’s something we’re looking into. I know GentleBen is ALL over this game. We’ve still have our demo game from last year’s GenCon if you want to see it played. And we also have a battle report if you want to watch a larger scale game. The models are just plain cool. 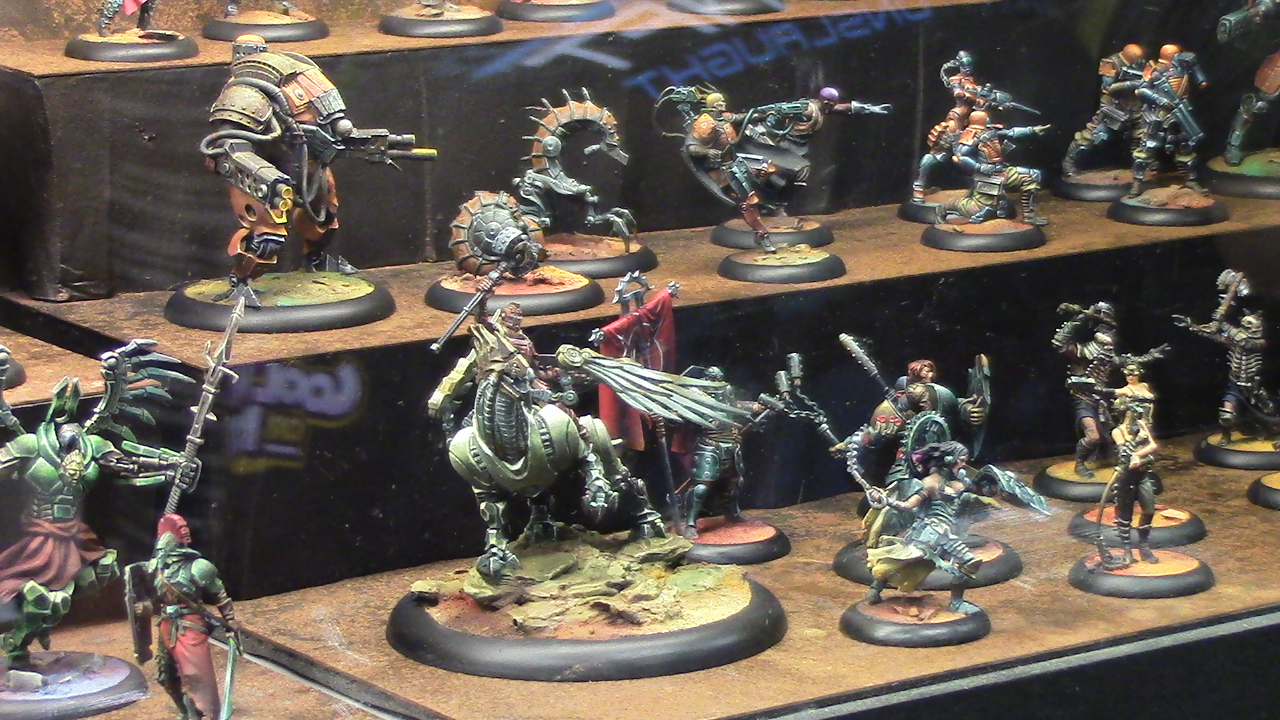 Wrath of Kings was also making it’s big debut, it’s another CMON game that is simple to learn and difficult to master. It uses a unique “single-die resolution” system for combat results. The core rules are available online and each unit has it’s own stat card with their unique rules. They even have a 13 minute “how-to play” video which I highly recommend watching. We also got a basic primer on how to play at GenCon which will be available soon. This is ANOTHER game that has gorgeous models. It’s also got some great background and the fluff in the big rule book is engaging – it’s a really well done piece of writing! It’s all in the core rulebook, online for FREE. What are you waiting for?! Go read it! Plus they have a fishman faction with bipedal sharks. Land Sharks if you will. And they are JAWESOME! 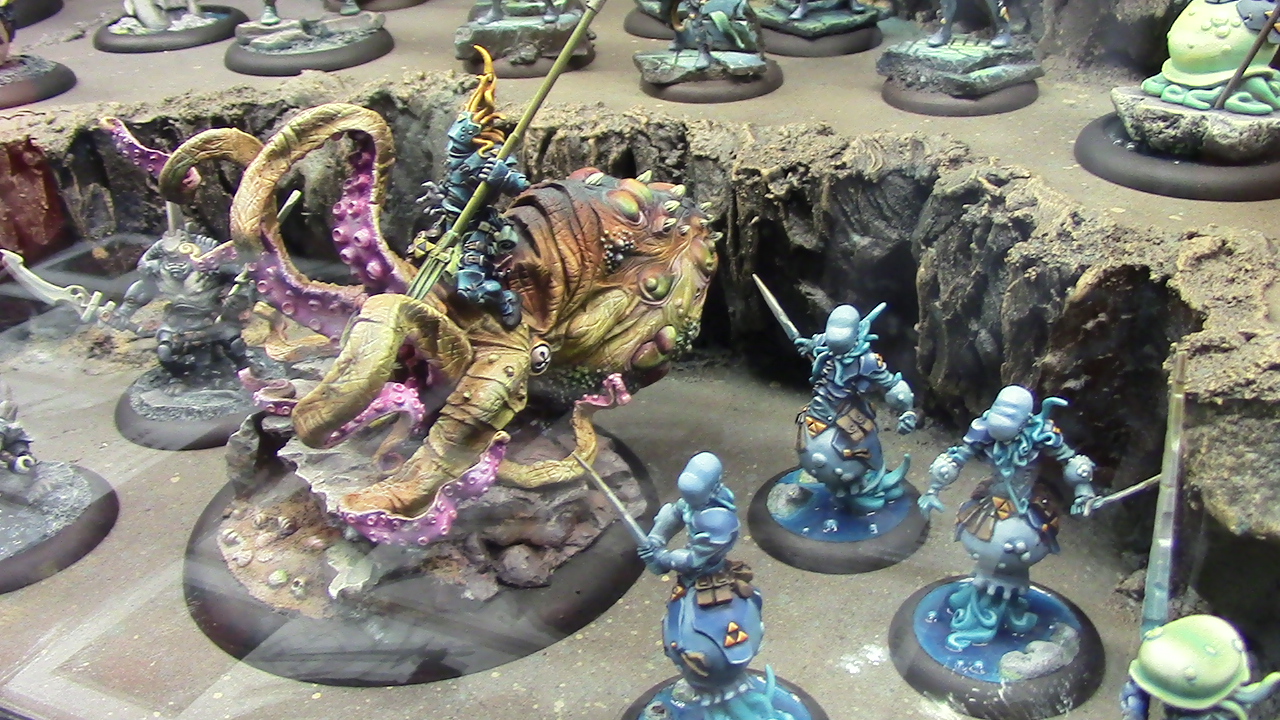 There is more stuff in the video but I wouldn’t want to leave you without some more teaser pics, would I? 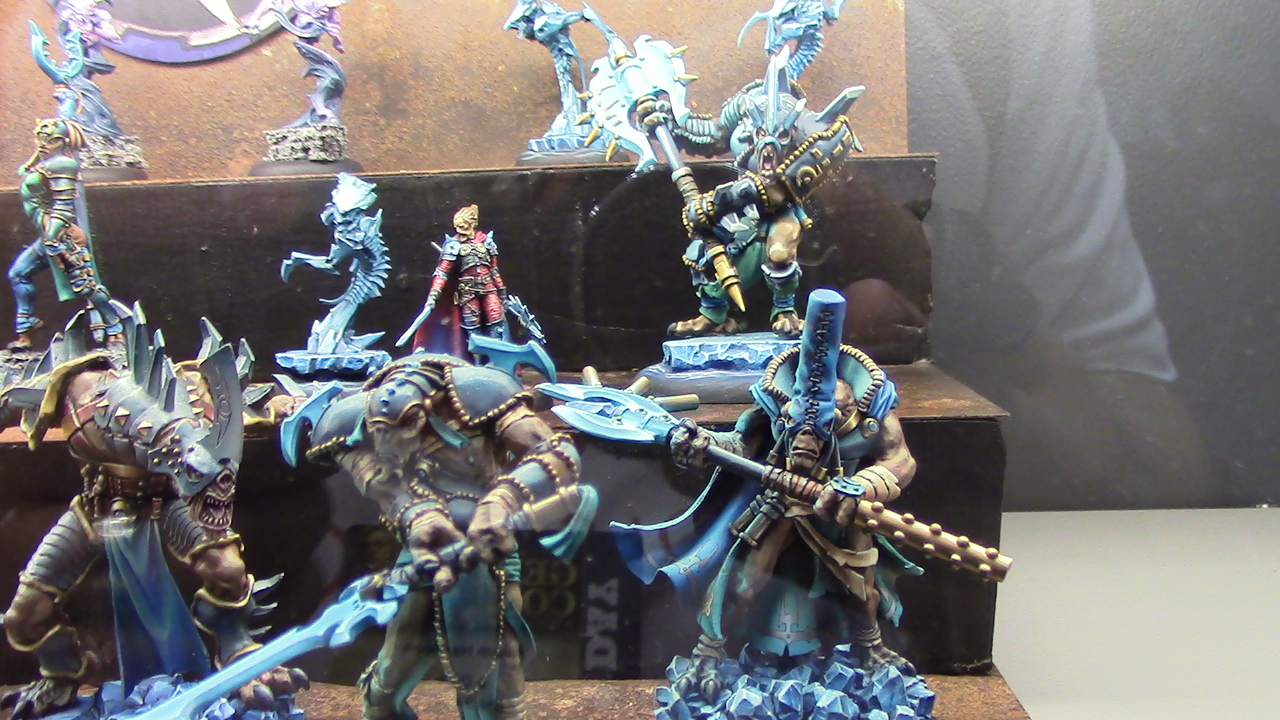 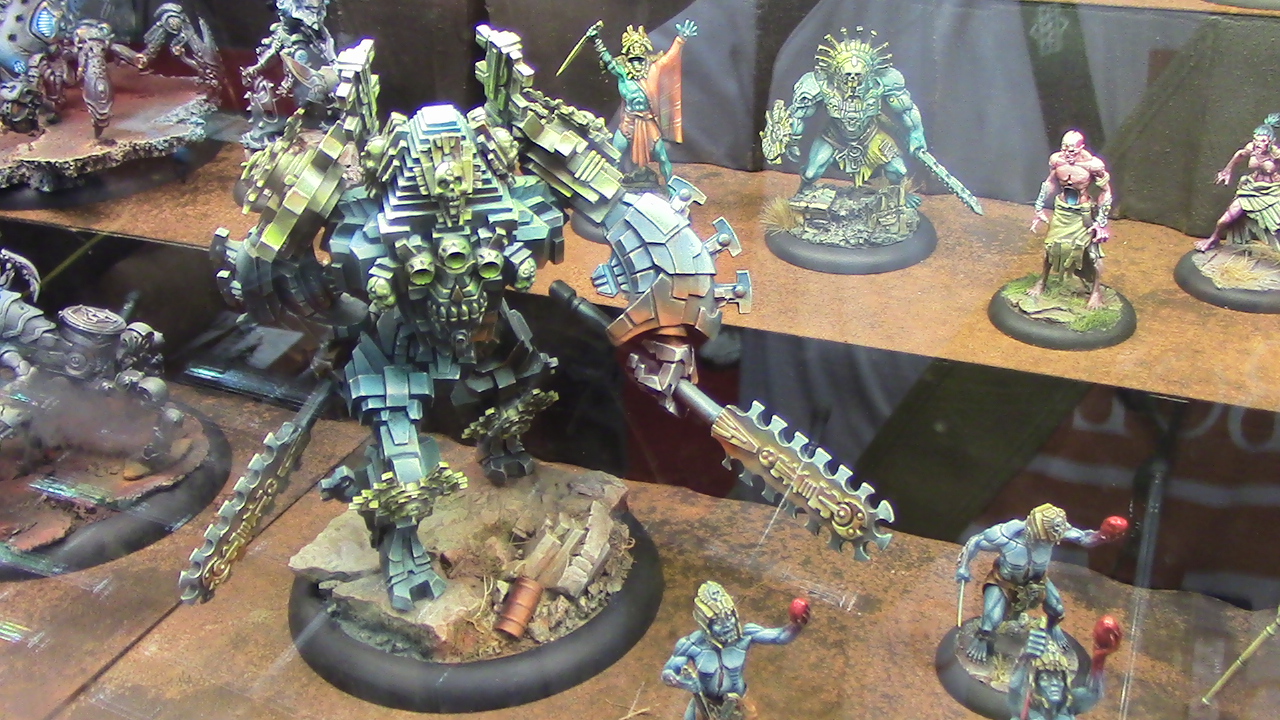 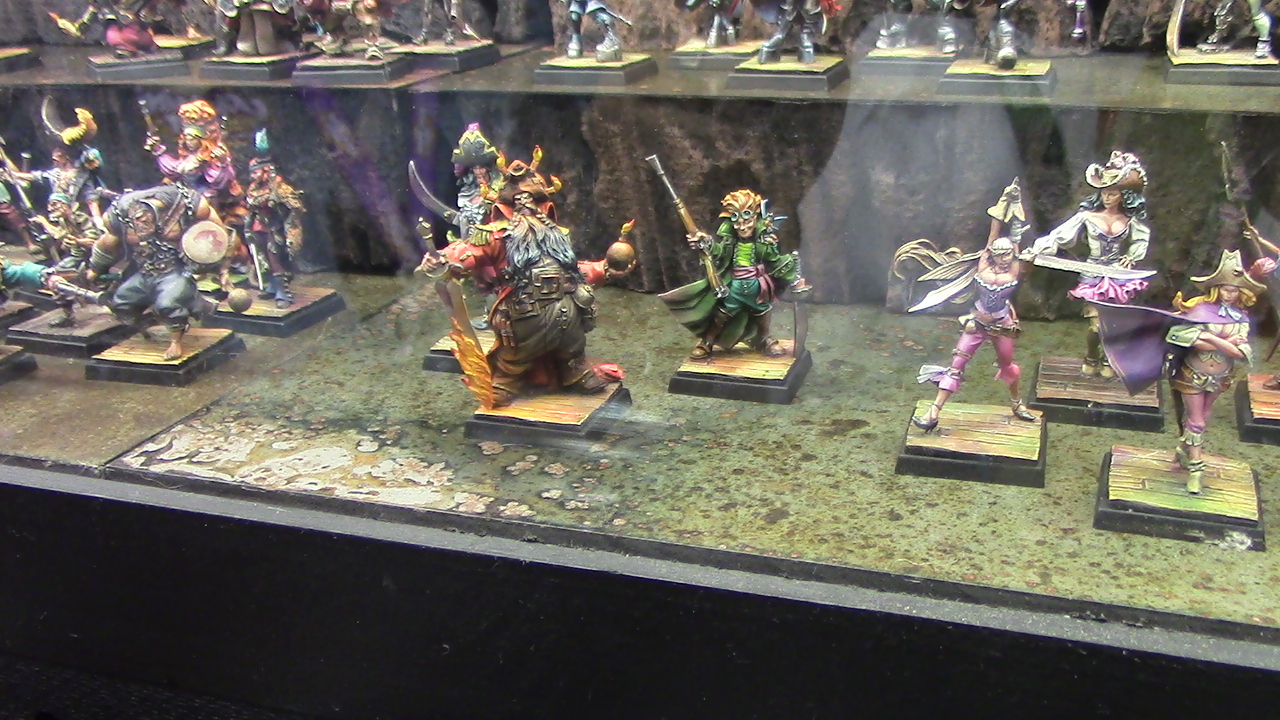 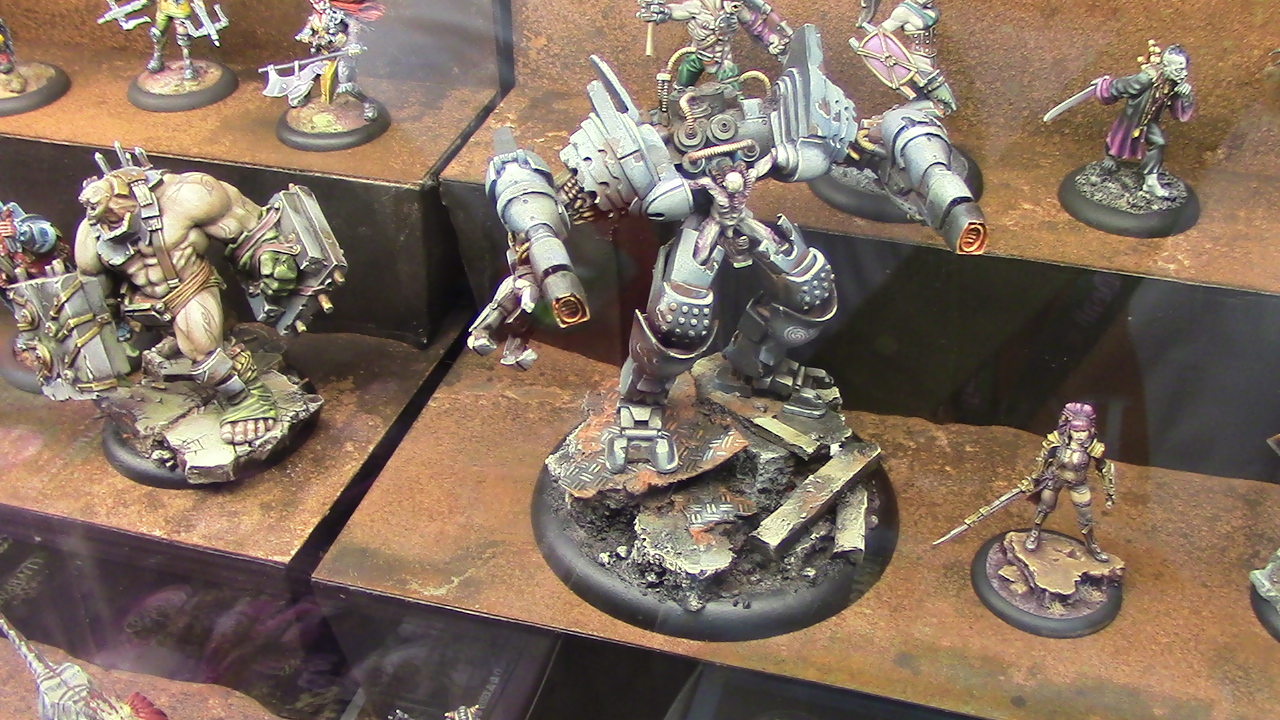 GenCon: The Coverage Continues! We’ll be back with more goodies, stay tuned…AdamHarry, OUT!

Author: Adam Harrison
Writer, Editor, Texas Native, and Austinite for 15+ years, Adam covers all things Tabletop Gaming. Which includes Warhammer 40,000, Age of Sigmar, D&D, Board Games and everything else that involves dice, boards, cards and a table. A hobbyist, player, and collector of miniatures and games, Adam's current obsession are his Death Armies for Age of Sigmar, his Blood Angels and Tyranids for 40k, and his ever growing Arkham Horror: The Card Game Collection.
Advertisement
CoolMiniOrNot Dark Age Videos Wrath of Kings
Advertisement 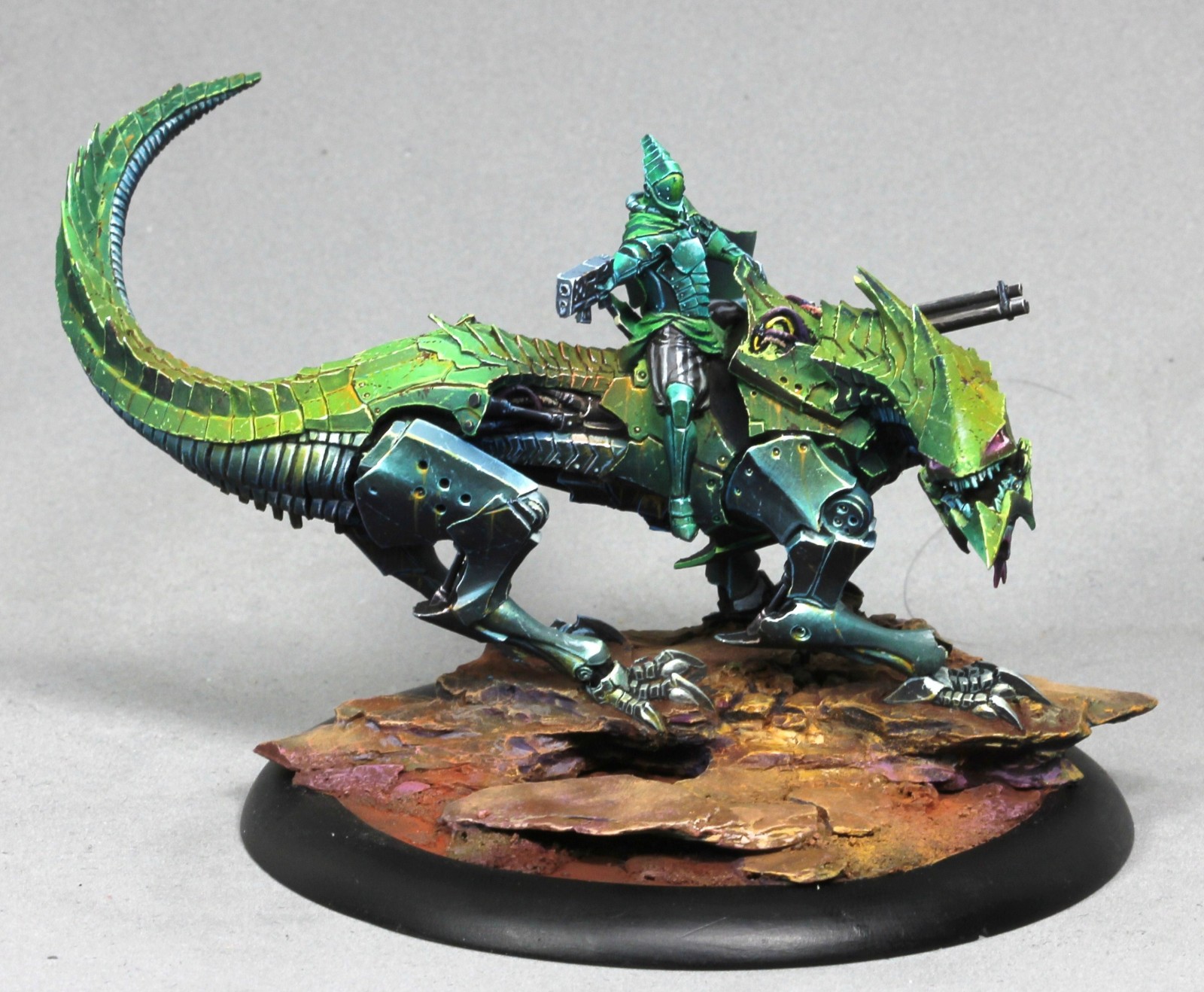