Greeting all!  SeerK here once again.  In this installment I am going to be looking at Spartan Games latest endeavor, Halo Fleet Battles. 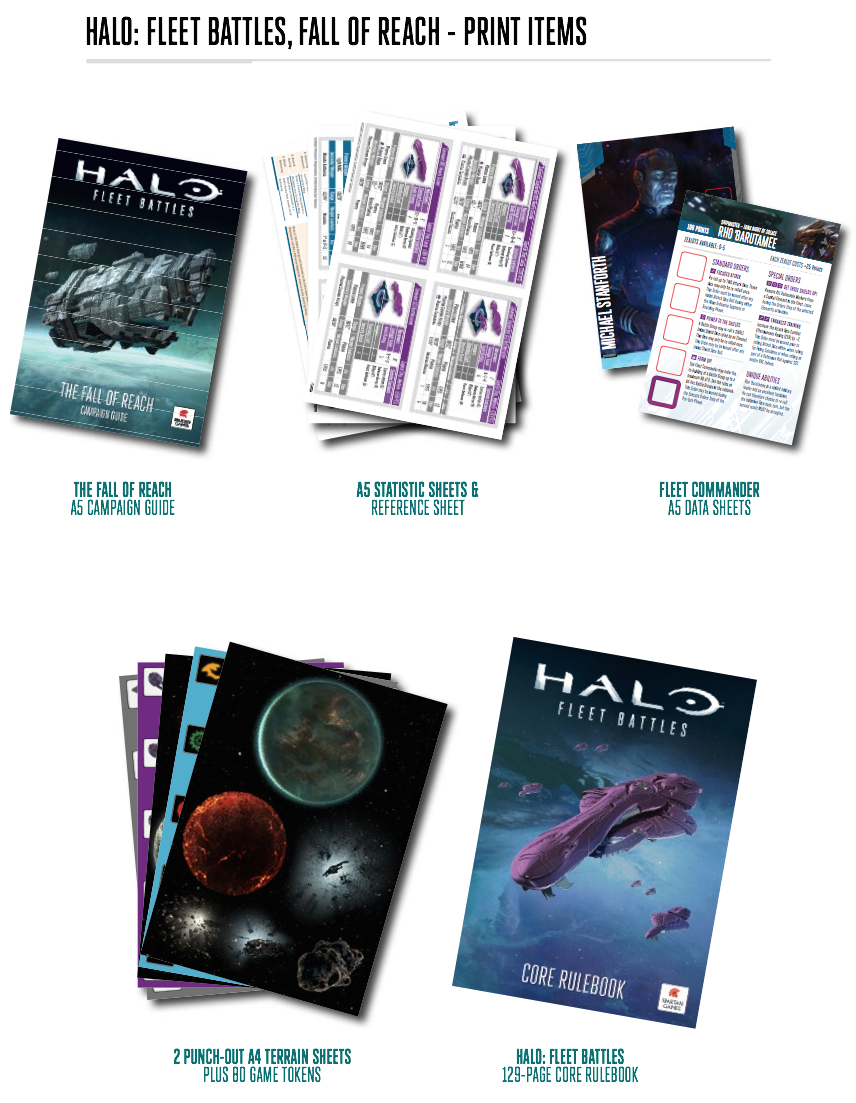 It came as a surprise to many Spartan Games fans that they had teamed up with Studio 343 and Microsoft in making a game based on Halo.  This is the first IP licensed to Spartan Games and it is a biggy.  If there is one thing Spartan knows how to do very well, it’s how to make a damn fun space ship game.  The first game using the new Halo IP is Halo Fleet Battles.  We have UNSC and Covenant space fleets battling it out in the depths of space.  Lets take a look.

The game engine for Halo Fleet Battles is completely new, but it borrows some game mechanics from other Spartan games.  The most notable difference though, compared to their other games, is that the game does not really use D6’s.  You have a pile of “Halo Dice” which have hits misses and failures denoted by symbols on a 6 sided die.  The Spartan hallmark, The exploding dice Mechanic, is present, but not in its traditional form.  It is also limited.  No single frigates taking out Battleships in this game.  Another notable difference is that the ships are based differently.  We have card overlays with the ships stats on the bases and in the case of smaller ships, multiple ships on one base. 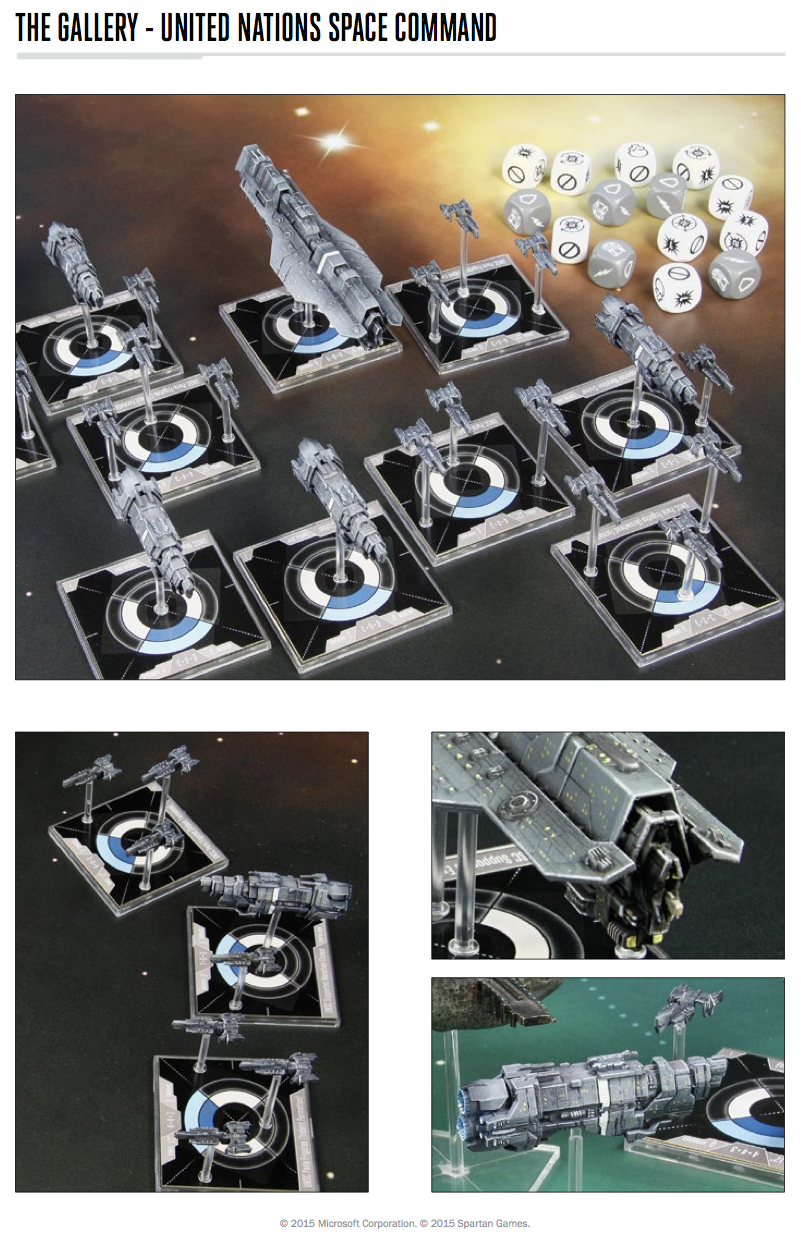 The game is divided into five phases 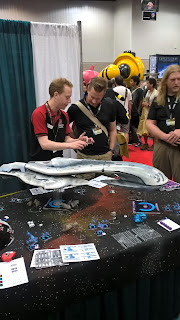 You have a commander that you buy as part of your fleet.  From my understanding there will be more characters you can purchase as time goes on.  The first Commander pack is up for sale on Spartans website and a couple of the FLGS’s in the area have them on their shelves. 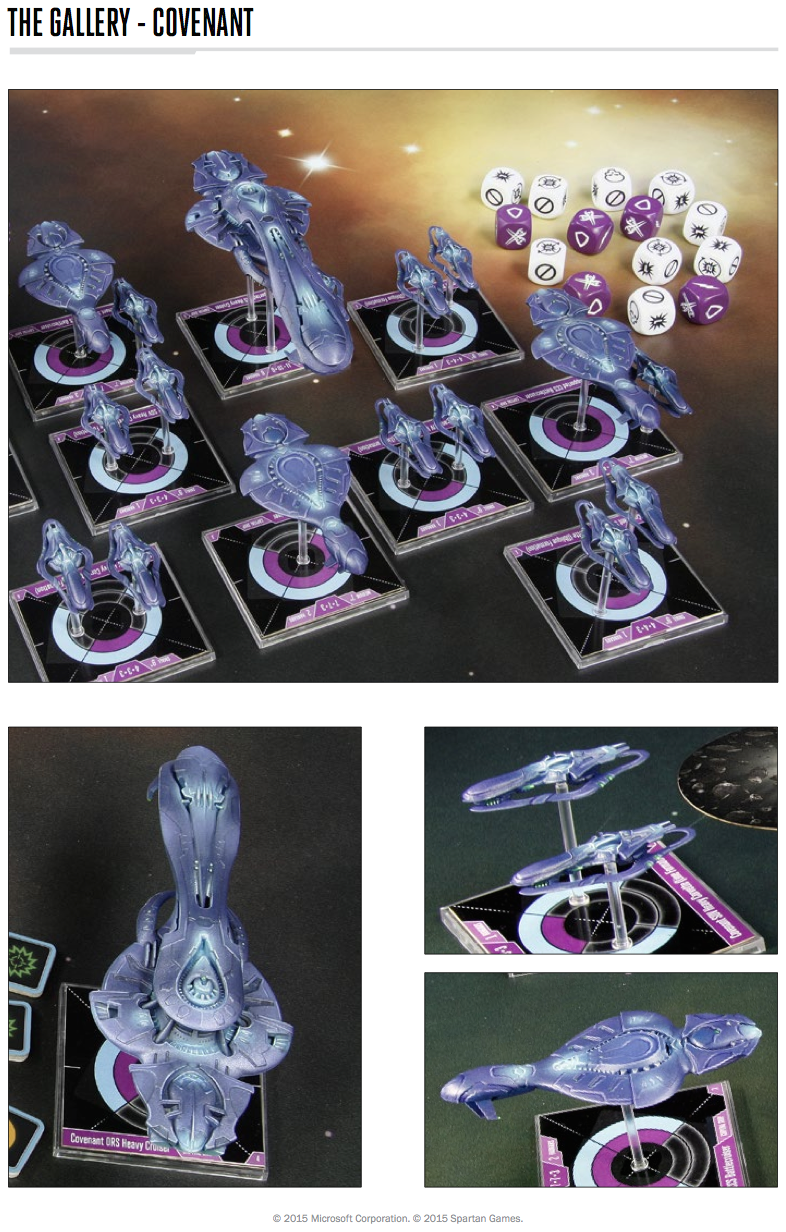 The Command Phase. The Commander and special characters allow you to do special attacks and actions via the Order Dice.  You roll the 5 order dice to start the turn off.  You arrange the dice on the commanders card and depending on what symbols you roll, it opens up options for special orders and actions.  If you roll any command Icons you can add these to your initiative roll.  Once you determine who gets the first activation, you proceed from the Order Dice Phase to the Wing Phase.

The Wing Phase. Much Like Firestorm Armada, Halo has alternating activations.  Unlike Firestorm Armada though, Halo has an entire phase dedicated to wings.  Bombers, boarding craft and the like all move and perform their actions independently of their parent ships.  Wings start on the table.  They move and engage each other and bigger ships.  They are represented by card stock tokens rather that resin SRS tokens.  I am still learning the game personally and it is recommended you skip the wings phase and using wings when you are first starting out as it would seem a lot of the complex interactions take place in this phase.  Interceptors and such block bombers and boarding craft rather than destroy them.  It would seem you can lock them up indefinitely if you so choose.  The wings phase is also how you deliver your boarding troops.  This is important for the UNSC as this is how you can really hurt Covenant ships.  Despite the numeric advantage the UNSC has a tough time dealing with Covenant vessels.

The Battle Group Phase is next.  This is where you move your Battle Groups.  Ships and Squadrons of ships that share a base are referred to as Elements.  Several Elements make up a Battle Group.  Several Battle Groups make up your fleet.  Every Element has a build rating.  When you are building your force it will have a point cap and each Battle Group cannot exceed 6 Build points.  A big heavy cruiser may have a build rating of 5, while a frigate squadron may have a build rating of 1.  Elements in a battle group move as a squadron would in Firestorm Armada.  You move your vessels, fire your weapons and then your opponent goes.  You go back and fourth until all the battle groups have activated.  I will go more in depth into the Battle group Phase and game play in general in our next installment.

The Boarding Resolution Phase is next.  You resolve all the boarding actions you started in the wings phase.  This allows you to send Spartans and Zealots to your opponents ships in an effort to cripple or destroy them.  This is a hazardous endeavor though and usually results in the loss of the boarding troops if the vessel is destroyed.  There is a slim chance of survival though.

In the End Phase you resolve all the miscellaneous tokens and statuses that your elements have acquired over the course of the turn. It is pretty standard fair for most war gamers. 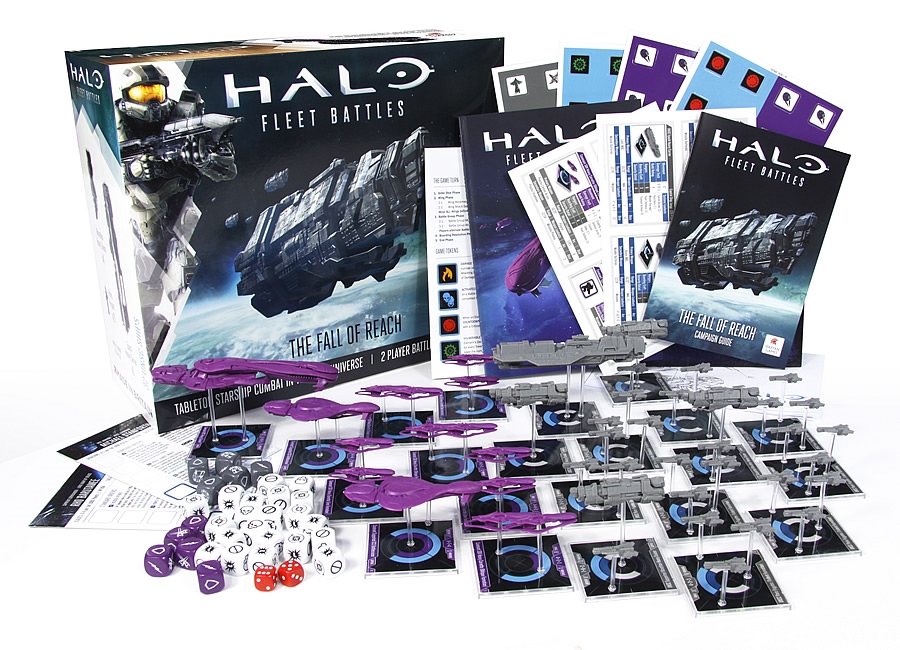 I am still learning the game.  I think there was a misconception made by many gamers, that is that Halo would be something that was similar in nature to X-Wing.  That is not the case.  It is a full blown miniature war game that has a lot of depth and nuance.  It draws from Spartans other creations, but stands by itself as a new game engine.  It borrows elements for Firestorm Armada, its damage system from Firestorm Planetfall and its feel from Halo itself.

So far I like it.  next time we will go more in depth into the system and how it works.