Checkout a translation of what may be the only new Tau content we’re getting: Tau Burning Dawn special rules! Get in here.

Shrouded?
Master of Beckoning: Once per game Aun’Do can use Invocation to choose two elemental powers instead of one.
Infiltration Cadre: All units in this Formation have the Scout USR. Units that already have the Scout USR gain Infiltrate instead. 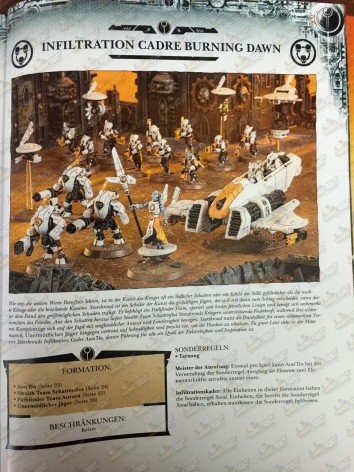 Exemplar of the Selfless Cause
Fearless
IC
Invocation Of The Elements

Wargear:
Honourblade
Homing Beacon
Hover Drone (not slowed by terrain when moving & charging, may move over intervening models and terrain but may not end movement upon either and automatically passes dangerous terrain tests).

I see the Markerlight rules for ignoring cover still has a cost of 2 tokens which, even as a Tau player, makes me a sad panda – the old 1 token removes 1 point of cover save was far more reasonable. 🙁

So from this we can see that the Cadre is a little spicy and maybe able to get the jump on some flanks to support Ghost keel or stealth elements flanking enemy lines. The ignore cover save for Markerlights looks to be staying the same which would expected if the new codex is just reprint of the old 6th Edition one.

May the path ahead be lit by the glow of a pulse rifle!